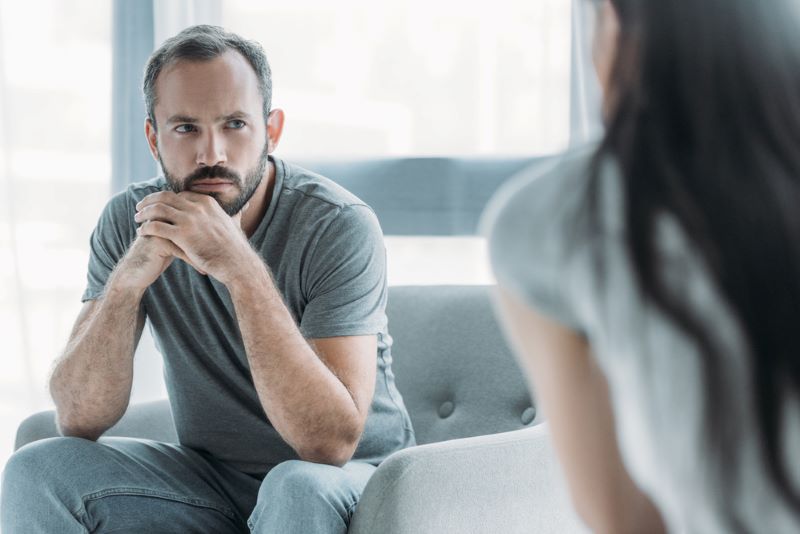 Hearing men say “I don’t love my wife” is nothing new for me. Not feeling in love anymore and not knowing what to do about it is one of the common reasons men come to Guy Stuff.

Often by the time help is sought the problem has only gotten bigger because they did something out of not feeling in love, like cheating on their wife, and it has only caused even more problems. Since we all want to be loved, it shouldn’t be surprising that when we don’t feel in love or loved by the one we’re with, most of us will go looking for love somewhere else.

Many men who don’t feel in love with their wives are afraid to say it out loud to anyone, especially her. A lot of time they won’t even admit it to themselves. Instead they tell themselves they still love her even though their actions say otherwise.

What Kind Of Guys Say I Don’t Love My Wife?

Here are just a couple of the men I’m working with right now that have admitted this is how they feel:

I have been married to my wife for 27+ years and I now find my wife unattractive physically (body & looks) to the extent that I can't even compliment her in honest. I look at younger lady's with pretty faces, large booty and great shape. My wife knows this and that I had an affair. She was younger, pretty body and I fell in love with her. Now years after the affair is over I still can't love my wife. What should I do? HELP. "- Kevin

Most of the time when men say they don’t love their wife what they really mean is that they still care for her, even love her, but aren’t “in love” with her. The passion, excitement, attraction is gone. They just don’t feel like they did at the beginning of the relationship.

The love versus “in love” battle happens to both sexes. And it’s extremely common. One of the biggest causes of this struggle are unrealistic expectations of what love looks like in a mature relationship. In all relationships the love changes from what it was early on in the honeymoon or passion stage as the relationship grows and matures.

For men in particular, love is often primarily expressed and experienced through physical affection and sex. Unfortunately, most middle-aged men expect the sex to be like it was when they were 20, and that’s just not possible for either themselves, their wife, or any relationship once it grows. Sex with someone the first few times is going to be new, exciting and unique, and it’s no longer going to be these things after you’ve been together for a while. But the same goes for anything – a new car, house, you name it.

Boredom in a relationship is a common problem that can lead to a man to feel he doesn’t love his wife anymore. Many of us expect, or want, the happiness and love we feel in the beginning to always be there, but neither one is a constant for any of us.

I need help. We have a 1-year old daughter and I'm 5 months pregnant with our second. My husband just told me he might want to get divorced after only 5 months of marriage and that he regrets marrying me because he's not in love with me. He says he cares for me deeply and does LOVE me but isn't "in love" with me. He said it's not my fault and I feel like I have tried everything to be a good wife and mother and it's not working. I don't know what to do, I want him to be happy even if that means he wants to be divorced, but I don't want to put my children through a divorce and I still deeply love him. We're a Christian couple and I keep praying things will work out but it isn't looking good." -Natalie

Why Men No Longer Love Their Wife

While unrealistic expectations of what love and marriage is supposed to be like are big contributors to why husbands say they aren’t in love with their wife, there’s much more to it than that. Any relationship, especially a marriage, is going to have some history. And with history comes baggage.

The biggest failing in relationships is communication. As I said earlier, most men who don’t love their wives anymore haven’t told her. Is it just men who don’t communicate well? No, of course not. Almost no one wants to tell someone close to them something as hurtful as, “I don’t love you.”

Here’s a common pattern in most relationships:

Problems Aren’t Communicated. Many partners don’t communicate well and so they avoid it, especially a lot of men. And so big and small issues accumulate, and the affect they have on you doesn’t get communicated. This results in a buildup of negative emotions, such as anger or resentment, and as this happens over time it can take you to the place where you’re telling yourself (or maybe others), “I don’t love my wife.”

Problems Aren’t Addressed. Even when issues between couples are communicated, it usually isn’t done very effectively or productively. But most often they’re just ignored. There are a variety of reasons for this, from wanting to avoid conflict, not knowing what to do about the problem, fear of making things worse, etc.

Problems Aren’t Resolved. A couple told me yesterday they had gotten past the fight they had the prior week. When I explored what they meant it turned out nothing had been resolved or done to prevent the same thing from happening again. Some time had just gone by and they each felt less impassioned about the topic. This is what most couples describe as, “we resolved it” – when they really haven’t resolved anything.

Is Love A Feeling Or An Action?

Love is a feeling that should produce action that demonstrates it and let’s the other person experience it. Many times in problem relationships love is said (although often not much), but not shown. Love should be seen in caring actions, compromises and sacrifices, and behavior that shows respect, admiration and appreciation.

Yet too often most of us get wrapped up in the feeling of love.

“I just don’t feel in love with her”

“I don’t feel any love from her”

As you can see from these statements the feeling of love is actually developed from actions or non-actions. Is love a feeling or an action? Yes, it’s both working in tandem.

I am a married man since 2011. I don't know whether I love my wife or not. When she stays with me I have no problem, but when she goes home to her parents leaving me alone, my problems start. I can't live without her even a day. I am thinking about her all day. She says she loves me much more, but I feel she doesn't love me, and doesn't even care about me." -Nirav

What To Do When You Don’t Feel In Love

Unfortunately, by the time most people (men or women) don’t feel in love they also usually don’t have any motivation left to change anything. And this is a big, big problem when love feelings develop out of actions. If you don’t have any desire to try, how do you form actions that can produce in love feelings?

This is why when most men say “I don’t love my wife anymore” it usually means, “I’m done.” But it doesn’t have to.

Since love feelings ebb and flow about anything, even for a child, they can flow back just as well as flow away. It takes effort though. Time just isn’t enough. And the right kind of effort is required. But first that problem with motivation must be addressed.

This is one of the many things I do in my counseling work with men – help them develop the motivation to try and then teach them how to direct their efforts in the most effective way possible, which can look different in each relationship. It is possible for “I don’t love my wife” can be turned back into “I love my wife.”

Have you felt this way yourself? Or has your husband told you he’s no longer in love with you? Would you please share a little about what that’s been like for you?

I Hate My Wife, I Hate My Life, And I Don’t Know What To Do

7 Signs Your Spouse Is Becoming Emotionally Detached From You