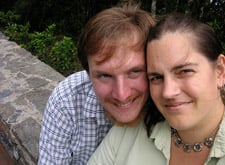 It was midnight when it finally hit Lisa. As she settled in to sleep another night without Jeff coming up to bed with her, she realized that she was married to a roommate, not a partner. Where was the love they once had? She thought about getting counseling and wanted to be one of the marriage counseling success stories she read about on the Internet but believed Jeff would never go. Lisa felt like she had no options.

It was hard enough raising three kids, but to feel like she was doing it alone made it even harder. She was scared to take any steps, though. She was afraid Jeff would never change or that she would end up alone. She did not know how Jeff would react if she went to counseling.

Lisa gathered up her strength and told herself that there had to be something better. She knew there was hope and a better option for the future of her marriage. She committed not to settle for this kind of marriage any more and called Guy Stuff Counseling.

At Guy Stuff, Lisa got the guidance she needed to work with Jeff. She learned how to understand things more from his perspective and was able to get him to understand life from hers. Jeff saw the changes in Lisa and how they were positively impacting their marriage. He eventually came to marriage counseling with Lisa. Guy Stuff taught them three communication tools that helped them to talk without ending in a fight. Together, Lisa and Jeff discovered what to do to get their marriage back to what it once was.

Today, they are partners in every sense of the word and are no longer living together just as roommates. Both Lisa and Jeff are thrilled to be one of Guy Stuff's marriage counseling success stories.

"His parents became really good roommates and that's what we became, too. We both agreed we wanted more. You've taught us how to get the marriage we want."

44 & 47 worked with Guy Stuff to change their marriage