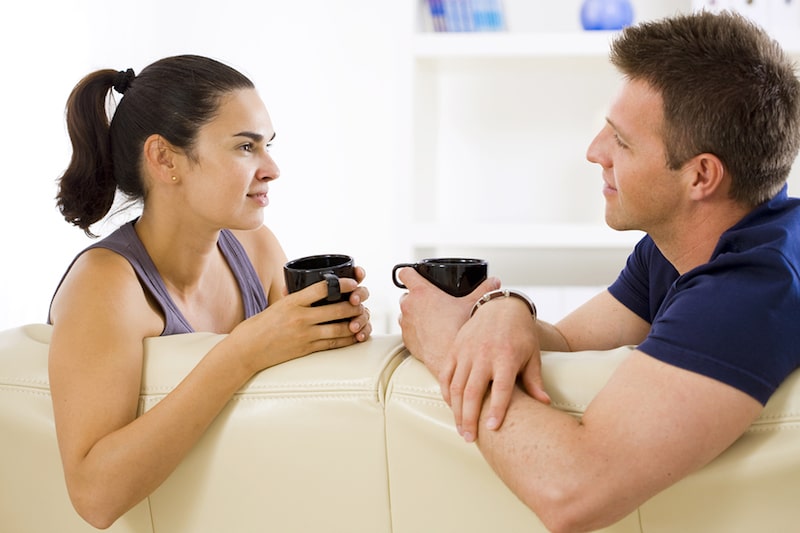 In counseling I regularly hear partners tell me either they talk all of the time or never talk. Both descriptions can be misleading if taken literally. Except in rare instances, like after a fight, most couples talk. They have to just to get through the daily issues of life together - "Are you taking Tyler to school or am I?" However, talking about the circumstances of life is much different from discussing the deeper issues of what life together is really like - "Are you happy with us?" When a partner complains about a lack of communication it's usually about the latter example.

When partners tell me they never talk that's obviously not true. With the ability to text and DM (direct message) literally talking verbally with each other is easier to avoid or not do altogether. A couple told me this week they text each other while sitting in bed together. Partners who say the opposite and claim they talk usually don't mean about vulnerable topics such as themselves or their relationship, but about life in general, like "I saw Jason at the gym today."

There's a lot of problems in the relationship including money, but our biggest problem is lack of communication. He has a tendency to keep things bottled up until it just comes out at the wrong time and the wrong way. I get blamed for his anger and then he would say that he's the calm one and I'm the problem. If there's an argument and I try assertive communication he doesn't go with the flow and just says 'it's all my fault' in an angry tone. I keep saying that it's not about putting blame, it's about expressing feelings...but it never seems to work. I'm at breaking point in trying and it feels like it's getting worse. We are struggling so much in money. I always start the conversation saying 'I don't want to start an argument but we will be short on the mortgage, can you please transfer money.' So how can I create a normal communication line between us without stressing that our communication will be f@#%*d again?" -Lacey

When partners say there's a lack of communication in their relationship what they usually mean is there's no communication.

Here's a real-life example of what lack of communication looks in a marriage (I'm currently counseling the wife). A husband, Allen, is unhappy with the sex in his marriage. Rather than speak to his wife, Renee, and tell her how he feels and what he'd like to change in their sex life, he decides to write her a letter instead. Now to be fair sex is a difficult topic for most couples to talk about, but Allen and Renee also have a long-standing pattern in their relationship of avoiding dealing with things.

Renee reads the letter and rather than talk to Allen she just decides she'll make more of an effort. She also journals about some of the reasons why she thinks their sex life is the way it is, but does nothing more. The couple never talks about their sex life.

It's now 10 years later, Allen is having an affair and is divorcing Renee. His limited explanation of why he wants to end their 27-year marriage goes back to that letter. Allen says she never responded to it. Renee says she did and tried to make their sex better. He says he didn't see any change.

Allen believes he communicated with Renee. Renee feels he never told her he was still unhappy after the letter. Lack of communication has led to divorce for this couple. It all started with their pattern of avoiding talking with each other that grew and grew over time.

No communication often arises around deeper issues. Clay really wants to know if his 4-year relationship with Zoey is going to be able to turn into marriage. But he feels stuck because every time he brings up their relationship and questions he has about it she says he's being negative or attacking her. So he backs off to avoid the conflict. They have fun weekends together, but he wants more and is unsure if she does too.

Here's another example of a relationship with no communication:

My boyfriend of almost 8 years is saying that he's not happy and doesn't think he should be in a relationship right now. While he says that things haven't felt right for 2 years, he never indicated anything was wrong. I am completely blindsided by all of this. I love him so much and thought we were building a life together. Things have gone from being fine to I don't know if he even loves me status overnight, it feels like. He doesn't communicate at all and has completely shut down. He is also battling depression currently. I have no idea what to do. I want to fight for us, but I don't know where to begin. I'm scared and heartbroken. He's been my world for 8 years. Please help me." -Hannah

A list of reasons why there's a lack of communication between partners could be endless. However, there are some common triggers and patterns for communication problems in marriages. One of the biggest factors is that not communicating snow balls and becomes a habit and the norm as opposed to a temporary response to a specific event.

Avoidance can become a normal response and pattern in relationships for a lot of couples. We'll avoid certain topics (sex, money, etc.), certain situations or any potential of conflict. While this provides relief in the moment, the issue doesn't go away and requires eventual accounting for when ignored -- just ask Allen and Renee. This is an incredibly common pattern in relationships.

Unfortunately, all partners will just naturally drift apart over time (if they're not doing things to counter it) and don’t usually see this happening until the gulf between them is unavoidable. Then they wake up one day and one partner has either stepped out of the relationship by cheating or is just "done" and wants to separate. This is what a lack of communication can lead to even though in the moment it doesn't look that bad or damaging.

I was counseling a man this week whose 38-year marriage is ending in divorce. We were examining he and his ex's habit of avoidance and he summed it up by saying, "We never had those conversations."

I noted that that statement could have been the motto for their marriage (and for why it failed). Another example of the consequences:

Last year my husband told me he didn't love me anymore. He actually cried when he told me and told me he wanted to try and work it out with me. He said we have had so many unsolved problems over the years, fights, lack of communication, no sex life, etc., that his feelings have changed for me. He refuses to go to counseling because it won't help him. He moved out so we are now legally separated. We are doing nothing now to fix our marriage. He says he can't do anything with me that he doesn't feel or have the desire to do. Is there still hope for my marriage? I don't want a divorce. I still love my husband and my family. We have two very small children. I don't want this life for them." -Cynthia

Here are some other reasons why partners aren't communicating:

This list could go on and on, but this will give you an idea of some what I hear partners say to explain they're lack of communication. The reasons are endless, but the results are the same.

When Does Lack Of Communication Become A Big Problem?

Poor communication happens to everyone -- even partners in healthy relationships. We forget to share something or leave out some important details by mistake. Getting upset and not communicating for a while doesn't have to be a problem. Sometimes allowing a pause is helpful and part of practicing good communication skills.

Lack of communication becomes a problem based on the frequency and level of damage it causes. As described above it can become a pattern of avoidance or even a form of verbal abuse when it turns into the silent treatment.

Here are a few questions to ask your self in order to begin to consider the effects of not communicating:

What To Do When Communication Is Lacking

In order to fix a lack of communication in any relationship both partners need to see it as a problem and want to do something about changing it. Unfortunately, it’s common that one person is more motivated than the other, or one partner is fine with things just the way they are.

Regardless of whether you both agree there's a communication problem or it's just you, here are 3 things to do to start getting it to change:

My wife and I are in need of marriage counseling due to communication issues and pretty much everything else. There is so much I don't even know where to start. Can we get that spark and happiness back?" -Julian

Sadly, lack of communication in almost every relationship isn't uncommon. Unfortunately, just accepting it and not doing anything to change or fix it isn't unusual either. The most important thing is whether you're going to be like Julian and do something about it.

What's the lack of communication in your relationship or marriage look like? Get some feedback by sharing your story with us and your fellow readers in a comment below.

My Husband And I Have Nothing To Talk About Anymore