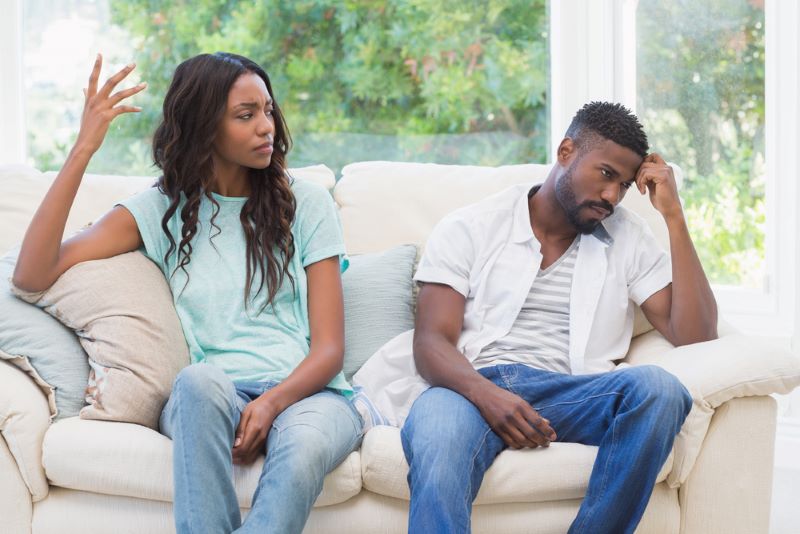 Damarius and Sara were in an argument rut. Whenever a disagreement started, and it seems like there’s constant arguing in their relationship, it always went the same way.

And then hours or days later they would act as though nothing happened and get back to the business of managing their life together. Thus, adding another, unresolved conflict to the pile. Not much later, however, the constant arguing that seemed the hallmark of their relationship, would start again.

Around and around they went in the same pattern. Pretty soon that pile of unresolved issues felt like it took up more space in their relationship than anything else.

Sound at all familiar?

It’s not uncommon. Many couples, especially in long-term relationships, can find themselves in ruts arguing about everything. Falling into a cyclical pattern of fighting, particularly when it doesn’t result in resolution, is not only ineffective, but it can also lead to a relationship’s demise if a couple can’t break the pattern.

Why Does Constant Arguing Happen?

The overwhelming reason couples end up constantly fighting in the same, ineffective way, and often about the same things, over and over again, has to do with communication. Or more precisely, the lack of communication.

One of the big issues for which couples seek counseling is communication. More specifically, poor communication and the resulting problems. Dr. Kurt works frequently with couples who’s constant arguing and ineffective communication are threatening their marriage. According to him,

Another contributing factor in relationships with constant arguing is the disconnect that develops and shifts the couple dynamic from one of being partners to adversaries. As a result, not only does each person listen less and care less about the other one, but they also shift into self-protection mode and turn their communication into a competition. Communication about any topic can turn into one of each partner going on either offense or defense, trying to be the winner and not loser, and leaving the interaction feeling worse about themselves and the relationship. Talk about an anchor around a relationship!”

Communication breakdown in a relationship happens over time to most couples. The busyness of life means your focus gets split across many areas and often the one area (read person) who ends up with the least of your focus is your partner.

This means that when an argument arises, you’re already predisposed to not really listen to what your partner has to say. So, rather than resolving a problem you react in an autopilot manner with certain scripted type behaviors.

In Damarius' case, sarcasm and silence, and in Sara’s case, yelling and slamming things around. After all the energy they’ve spent on what amounts to nothing, neither one of them have the energy needed to actually talk about the real problem.

The same issues come up again, maybe in a slightly different way, but it gets handled in the same manner as before. And the cycle starts again because there’s no resolution to the true problems within the relationship. Constant arguing becomes a regular feature and leads to frustration, resentment, and yes, more arguing.

The Effects Of Constant Arguing On You And Your Relationship

Arguing constantly will take a toll on the happiness and satisfaction within the relationship. The tension that constant arguing creates can be exhausting and lead to the feeling of walking on eggshells around one another. Not at all the way you want to feel around your partner or at home.

If that type of regular, unresolved conflict goes on for too long it will lead to bigger problems in the relationship. Over time resentment will build and cause you and your partner to grow further apart. This often means that intimacy lessens, anger builds, and one or both partners will feel like they’ve fallen out of love.

It’s not just the relationship that experiences problems either.

Constant arguing with your partner creates unhealthy levels of stress that will have negative effects on your physical well-being as well. Chronic and repetitive conflict can lead to a weakened immune system, insomnia, headaches and digestive issues, and anxiety to name just a few. The isolation and loneliness within your relationship caused by what feels like never-ending arguments can also exacerbate these problems and lead to depression.

The resulting combination of emotional turmoil and physical discomfort has the unfortunate effect of making it even harder to feel motivated to make the changes needed to stop the cycle of constant arguing in your relationship.

The continual, negative back and forth between partners will also affect more than just the partners involved. Family, especially children, and friends will suffer as well.

Friends may begin to feel uncomfortable and start to avoid interacting with a couple who always seem to be sniping at each other or just seem to dislike one another. The consequences on children of constant fighting in a relationship can be much more dire, leading to anxiety, emotional instability, and negative social behavior in kids.

Ways To Break The Pattern Of Constant Arguing

There’s no avoiding arguing in a relationship. In fact, a certain amount of disagreement and fighting is healthy and allows you each to grow through resolution. But that’s the key – resolution.

When you fall into an unproductive routine of arguing and constantly fighting with no resolution, you must find a way to break the cycle if you want your relationship to survive. That’s easier said than done, however.

Many couples, like Damarius and Sara for example, fall into a pattern of arguing and skipping the resolution, preferring just to cool off and pretend nothing happened, only to fight again (and again). This pattern won’t naturally change over time, it needs to be deliberately stopped and modified.

But just how do you do that if you’re already feeling frustrated, tired, and exasperated? Consider the following suggestions to help you break the pattern.

Long-term relationships naturally have ups and downs. Getting through the downs takes commitment and willingness to change on both your parts, especially if your relationship includes constant arguing. Keep in mind the suggestions above are not a cure all but rather general guidelines for starting the process of changing your unhealthy communication.

My Husband And I Have Nothing To Talk About Anymore