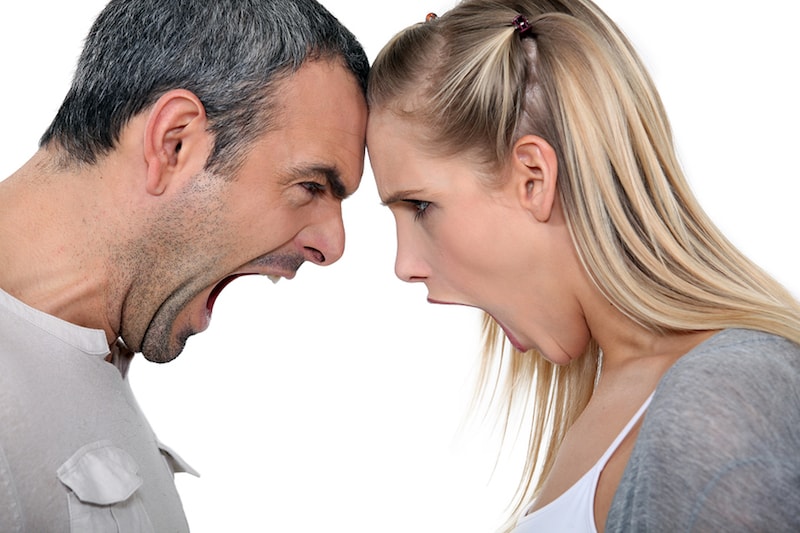 Recently Kate told me she's, "Fighting with my husband constantly."

"Is that normal?" she asked.

Yes and no I told her.

Disagreements in a relationship are normal. We all disagree with our partner from time to time. When both partners are expressing their true thoughts and feelings on different topics, there's bound to be some disagreement.

But disagreement isn’t the same as constant fighting with your husband.

Let’s face it, no matter how much you love someone and get along, you’re each different people with your own thoughts and opinions. In fact, that’s likely something you enjoyed about each other in the beginning.

So, yes, occasional disagreements or even arguments are normal.

How Fighting Constantly Can Look In A Relationship

Unfortunately, some couples disagree a lot more than others. And for some those disagreements turn into arguments which turn in to fights – constantly.

And it's a big problem if you say, "I'm fighting with my husband constantly." Fighting constantly can be an indication of much bigger problems.

When Kate and her husband, Rick, met with me for marriage counseling I witnessed them fight about everything in their lives except for 1 thing - work.

was a fight to the death over who was right and who was wrong. Logic, reason, and even the topic at hand was no longer the issue – just who got to claim the label “right” vs. “wrong.”

Is it any wonder they're both miserable in their marriage and, using their own words, both say they have a “severe and intense dislike for each other”?

When fighting with your husband is constant, hostile, and unproductive it can destroy your marriage. The same is true for husbands fighting with their wives.

Learning how to stop fights and keep them as disagreements, and at the most arguments, is crucial for a healthy relationship.

When an argument devolves into a “fight” it means anger is the primary emotion being felt and expressed. This is a problem because anger overrides logic and caring, and can lead to words and actions that are extremely damaging.

Take a look at the below social media post I wrote about relationship arguments. 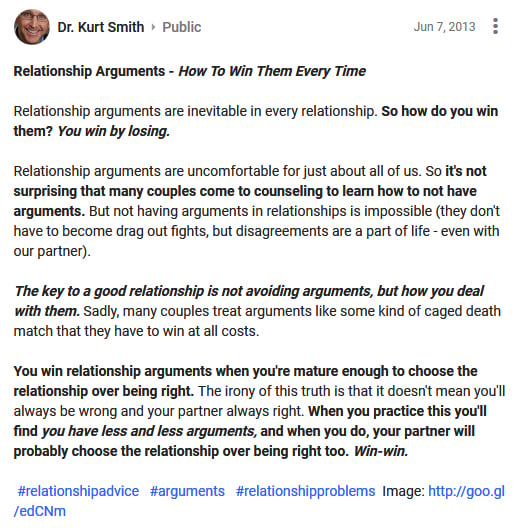 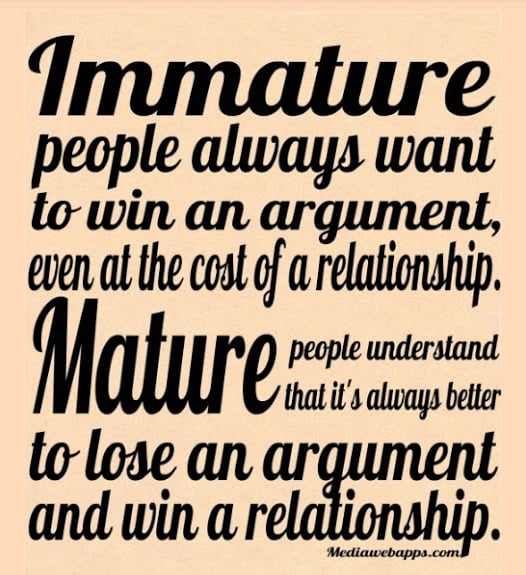 Here's a very important point from the post: The key to a good relationship is not avoiding arguments, but how you deal with them.

Consequences Of Constant Fighting With Your Husband

I don’t think I’ve ever met partners who enjoy fighting – at least not both of them. Given the choice nearly all partners say they just want peace and love (maybe not those exact words).

But for some couples it certainly can seem like there’s more effort put into the fight than into the effort to keep the peace.

So much so, in fact, that many couples fail to see what the constant fighting is doing to them individually, as well as to their relationship and family.

On an individual level constant fighting with your husband will begin to seep out of the relationship and invade other aspects of your life. Eventually you could become someone who’s:

Not flattering, is it?

And no, you’re not the exception.

Constant, unresolved anger is like sand – it gets everywhere, and you’ll be finding grains of it in unwanted places for ages.

It will also have detrimental consequences for your family. Children in homes with constant fighting are plagued with a number of social, behavioral, and educational problems. Among them are:

These are just a few of the areas that can be affected.

It should also be noted that children learn conflict resolution from watching their parents. And no matter how you instruct them, they will eventually do what you do, not what you say.

As for your marriage, the problems are clear. Constant fighting with your husband will take you down the same path as Kate and Rick, right to that place of “severe and intense dislike” for one another.

The good news is that it doesn’t have to be that way.

Dealing With Constant Fighting In Your Marriage

Healthy, successful marriages don't avoid conflict and the disagreements and arguments that come with it. The partners in them know how to disagree and work through it without letting the conflict escalate to a fight or turn into verbal abuse.

In the rare instances when it does reach a fighting level, both partner’s recognize that and do something to reduce the conflict, like proactively stepping away and seeking some cooling off time.

There are a variety of other ways to handle anger as well. In a successful relationship each person will know what way works best for them, as well as their partner's preferred coping mechanism, and they respect their need to use it.

Another important point from the social media post: You win relationship arguments when you're mature enough to choose the relationship over being right.

This becomes a power struggle within the relationship with each partner wanting to assert themselves and be in control.

This fear is an obstacle for Rick. He's afraid if he doesn't fight his wife (on everything) he'll always be wrong and thus be powerless. This isn’t true at all.

I've seen many wives fight with their husbands for the same reason, needing to always be right (or more accurately, never be wrong). So, it's important to note that either sex - male or female, husband or wife, boyfriend or girlfriend - can do this. See how needing to be right can easily turn into emotional abuse?

Fighting between husbands and wives can occur for more reasons than just needing to be right. But the psychological causes for this aren't as important as just recognizing how destructive fighting is for the relationship.

An added bonus is that we will be more successful on other topics:

Which are you going to choose?

Will you choose to be 'mature' or 'immature' in your next argument?

Fighting with your husband constantly is unhealthy and will destroy your marriage. The same goes for you husbands fighting with your wives. Give the mature route a try and you may be surprised at the positive change in your relationship and life.

Editor's Note: This post was originally published September 07, 2014, updated on July 3, 2018, and has been updated again with new information for accuracy and comprehensiveness.