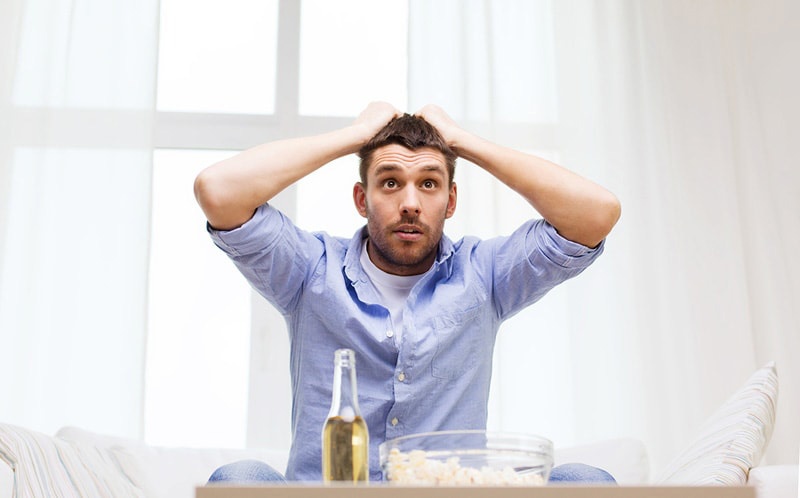 There's a new addiction in town, and it may be coming to a La-Z-Boy chair in your family room too. What began as a friendly competition between friends has now turned into a big money-making enterprise. So, is playing fantasy football now gambling?

If fantasy football is truly gambling, does that mean that it also has the potential to become a gambling addiction?

Is There Gambling In Fantasy Football?

A few years ago an employee of fantasy sports website DraftKings won $350,000 on their competitor, FanDuel's site, while having access to inside information from his employer. This win put a spotlight on this ever growing billion-dollar industry.

Lawmakers and others began to ask if playing fantasy football is really another form of gambling and should be regulated. Yet this controversy didn’t slow down player interest as DraftKings boasted 4.14 million entries in its NFL tournament during a weekend in 2015, up from 3.75 million, and took in $25 million in entry fees and while paying out $22.4 million.

And things haven’t slowed down a bit. The global fantasy football industry worth is expected to gross over $1 billion by 2026, with over 70% of players participating in North American games. It seems clear that fantasy football and other fantasy sports (baseball, soccer, etc.) are here to stay.

You would have to be sleepwalking through an NFL season not to notice the commercials for websites like DraftKings and FanDuel. Glamorizing million-dollar prizes and promoting testimonials from average Joe's who claim to have won big cash prizes - the allure that anyone can win is a strong one. A New York Times editorial wrote, "The companies behind these commercials say that their games are harmless and perfectly legal." They may be legal, but harmless is another story.

Regardless, fantasy sports is becoming big, big business. It seems like everyone is onboard with it too as professional sports leagues like the National Basketball Association and Major League Baseball, as well as businesses like Comcast, Fox and Google have invested in the industry. The New England Patriots and other NFL teams even have lounges in their stadiums designed specifically to cater to fantasy fans, but since betting on sports is illegal in all but 4 states, nobody calls playing fantasy football gambling.

There’s been great effort to make a distinction between fantasy sports and gambling. Currently fantasy sports are classified as games of skill rather than chance, therefore avoiding being categorized as gambling.

Fantasy football has been around for years. But until the last few years it's primarily been a group of friends or coworkers playing against each other over the several months long football season.

The premise is simple enough. Each person assembles a mock team by selecting different players and then points are awarded each week according to how those players perform. There are player drafts at the beginning of the season and a winner is decided at the end.

As the popularity has grown, so has the dedication of those who participate. A guy I am counseling for relationship problems flew to Los Angeles for a weekend at the end of August so he could get together with friends for draft parties in 2 different leagues he’s playing in.

Companies like DraftKings and FanDuel now encourage people to play weekly, and even daily, in more sports than football. Just like at the casino, you can play small or play big. Some people spend $5 on a football lineup while others spend thousands of dollars a day on hundreds of baseball lineups. ESPN and other sports networks offer daily fantasy player updates.

What used to take place over a sports season has now taken on the moniker of daily fantasy sports (#DFS). There are magazines, websites, even a fantasy players association devoted to those who play.

So, you tell me. Does fantasy football sound like a harmless pastime or gambling with all the potential to become a gambling addiction?

Although fantasy sports still enjoy their legal classification apart from gambling, not everyone agrees with it. Take a look at what some industry experts have to say:

Probably one of the biggest signs of whether or not playing fantasy football is gambling is to look at who's playing and winning. An article in The Buffalo News said that research has found a lot of the top daily fantasy earners are professional poker players.

Nearly everyone understands that taking a drug like cocaine or methamphetamine can lead to addiction, but many other addictive behaviors aren't so obvious.

Since fantasy games are still relatively new in the grand scheme of sports and sports wagering there isn't a lot of research on it yet. A study in the journal Addictive Behaviors found playing fantasy sports among college students led to an increase in gambling related problems. Eilers Research did a survey of daily fantasy players that showed 70 percent were not making money, but more than half of them didn't care because it made sports more fun for them to watch.

A buddy of mine has three fantasy teams going simultaneously. Yet when I see him during the season, it's like he's not really there; he spends all his time texting people on these fantasy football texting groups talking about what's going on in their world."

Whether playing fantasy football is gambling or not, here are 5 signs that it could be a problem for you (or someone you know):

Anything that controls us is not good for us. So, rather than jumping in the debate over whether playing fantasy football is gambling, or even if it could be an addiction, just be honest with yourself about whether it has more of a positive or negative affect on you and those you love. When we were kids sports was so much more simple and fun – and that’s still the way it's supposed to be.

Editor's Note: This post was originally published October 15, 2015 and has been updated with new information for accuracy and comprehensiveness.