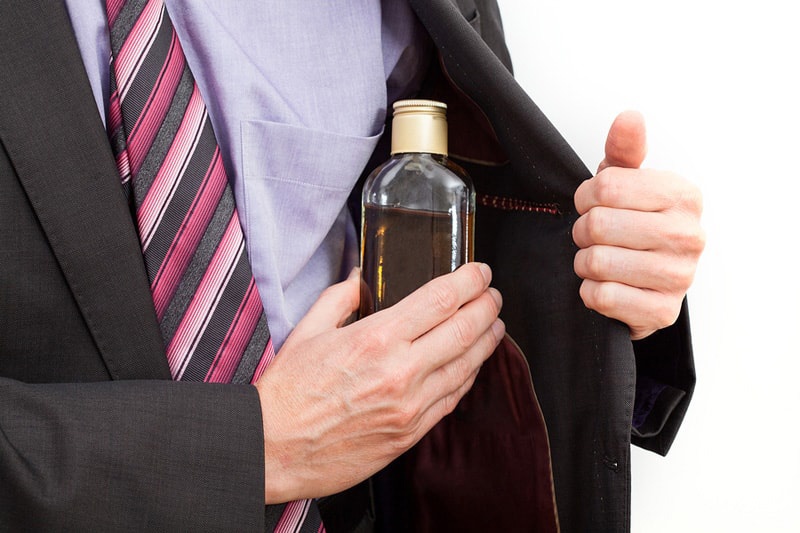 Abusing alcohol is extremely common in our society today. In fact, it's probably the most socially accepted behavior of the addictions I treat. Many people see drinking as just a pastime. It’s so commonplace to go out for “drinks”, “cocktailing,” wine tasting, or to a microbrewery that many people end up abusing alcohol without even realizing it. This makes it important to understand what alcohol abuse symptoms in men can look like.

Nearly all of the professional men that I treat for abusing alcohol are functional alcoholics. That means the traditional alcoholic stereotype of the guy going to the bar every night, drinking until closing, coming home drunk, beating his wife and being unable to keep a job, doesn't fit.

Below are 4 of the most common symptoms of alcohol abuse in men and how they manifested in 4 men that I've helped.

John is a medical doctor. One of the unique things about John is that he doesn't typically drink. Yes, you read that right -- he struggles with abusing alcohol, but he doesn't drink it regularly. In his personal life he drinks a couple of times a year at the most, always when eating out and even then he only has one drink. But John has repeatedly snuck beer into his medical office and drank during the workday in between seeing patients. If you're shocked that a doctor would do this, don't be because it's more common than you'd like to think.

John doesn't drink to the point of getting drunk -- just enough to get a buzz and take the edge off. Drinking for John is a way he manages the stress of his work and the pressures he places on himself. With the way he’s uses alcohol he is effectively self-medicating. Unfortunately, because he feels because his profession is health and health related problems, he doesn’t recognize that he himself is treating a symptom and not the real issue and that this will cause serious problems for him.

The common alcohol abuse symptom in men like John is strange behavior -- he doesn't drink much in his personal life but does at work. And his staff discovered his drinking by noticing his behavior becoming odd at work.

Craig is a pastor. He drinks regularly when out with friends and prides himself on being a different kind of pastor. He believes he's more approachable to people because he is more like them and thinks his willingness to drink demonstrates this. So when he's golfing with buddies or eating out with friends, he has a drink or two.

Unfortunately for Craig, his drinking didn't stop there. Craig drinks at home too. He says he's never been drunk in public around others, but at home he has. His wife, Shelley, didn't really have a big problem with his drinking until it started to get out of control at home. When it started to cause conflict between the two of them, he started to hide it. Shelley didn't realize that the vodka bottle in the cabinet never changed amount because Craig just kept refilling it with water after he drank it. She suspected he was drinking, but he deceived her and lied about it when asked, so she was never really sure. And, although his behavior sometimes seemed odd, his convincing excuses made it easy for Shelley to explain it away. Because she loved him and had trusted him for years, the idea that he would lie and cover-up something that was so clearly a problem was hard for her to wrap her mind around, so she dismissed the signs right in front of her.

Deception and lying are some of the most common symptoms of alcohol abuse for men. And unfortunately, it can be something that men can do fairly well for a long time. People who abuse alcohol become quite adept at hiding it, as you can see in Shelley and Craig’s case. Those lies always catch-up at some point, however. And they did eventually for Craig too.

Nick oversees the finances of a 500-person corporation with locations throughout California. Anne knew when she married Nick that he'd had a drinking problem in the past. He's had DUIs and has been arrested for domestic violence, too. Anne lives in constant suspicion - every day wondering if Nick's drinking again. Is she paranoid? Not really.

When she found an empty bottle behind the seat of his truck, Nick claimed it was from a long time ago. When Nick didn't get rid of all the alcohol bottles from a party at their house, and kept the half-filled ones under the sink, she was suspicious as to why, but he denied he was drinking any of it. He offered to take a Breathalyzer test, so she bought one, and strangely it kept showing a very slight amount of alcohol, but he said since it was showing such a minuscule amount it had to be an error.

Outright denial and lying is one thing, but there are also men who admit they drink yet deny that it’s a problem. They can “quit anytime” and one drink is “not a big deal.” However, it’s funny how their drinking never shows that to be really true. Many partners and wives of men who abuse alcohol are told they’re paranoid, uptight, or too controlling. Partners of drinkers often feel stuck between choosing to believe half facts or the emphatic denials of their partners (whom they want to believe).

Finally, Nick got caught drinking again and he couldn't deny it anymore. Signs of alcohol abuse always include denial.

Ben is an engineer. He's struggled with drug abuse for most of his life. In fact, he's been in rehab multiple times. He's always drank, but it's never been his preferred substance, until now. Ben drinks a bottle of wine every night before taking his Xanax and going to bed. He says he needs to do this so he can sleep. Fortunately for Ben, he's not married and has no one close to him to hold him accountable for his behavior (not a coincidence). Ben justifies his drinking by comparing it to his past -- he used to drink vodka, now it's just wine. He used to be addicted to cocaine, so what's the big deal about a little wine at the end of a long, hard day?

That's what Ben tells himself, but deep down he knows that his excessive drinking is not good for his health. Everyone who drinks too much is well-skilled at justifying their problem behavior, which is why it's always a symptom in men of alcohol abuse. “I need to relax,” "It just takes the edge off," or "I’m only a social drinker," are often the justifications you’ll hear from those who abuse alcohol.

The constant bombardment of enticing ads and story lines involving alcohol both tempt and offer justification for many. It almost seems now to be socially unacceptable not to drink. The glorification of a well-made cocktail and the portrayed benefits it brings for the person consuming it can be hard to resist. Many want to live the kind of lives they see others who are happily sipping away living, or feel accepted by those around them by joining in. While alcohol can be responsibly consumed, it's also be a slippery slope for many.

A doctor, pastor, executive and engineer. Four regular guys who all abuse alcohol and show the most common symptoms in men who do -- strange, odd behavior; deception and lying; denial; justifying. If you know someone whom you suspect is abusing alcohol too, read back through these men's stories and how these symptoms can manifest, and look for ways these symptoms could be present in their situation.

Probably the most common symptom of all is suspecting alcohol abuse but not knowing for sure. As you've seen above, alcohol abuse symptoms in men can be hard to prove definitively. One of the best things to do is to get the help of a professional counselor experienced in treating substance abuse. Getting the assistance of a professional who is objective and able to see through the BS can be invaluable in escaping the maze that alcohol abuse creates.

Editor's Note: This post was originally published December 20, 2014 and has been updated with new information for accuracy and comprehensiveness.