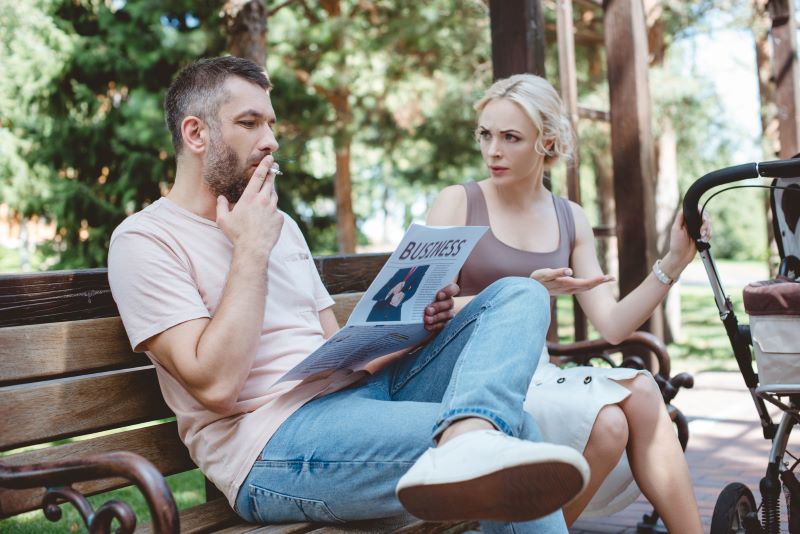 Any kind of secret behavior is going to be detrimental to a relationship, but smoking is one that presents some unique issues. Whether it’s cigarettes, pot, or vaping, trying to hide smoking from your spouse rarely works and can sink a relationship.

Most of us know that smoking is an unhealthy habit, and nationwide cigarette smoking is down. Unfortunately, it’s been replaced by many with vaping or pot smoking. Regardless of the substance you’re smoking, if you’re hiding your smoking habit from your spouse there’s a problem, and not just with your heath.

Why You Can’t Hide Smoking From Your Spouse

You know you shouldn’t be doing it, you know your spouse wants you to quit, but you can’t help it – you just need a smoke. And you figure if you do it in secret, away from everyone, and hide the evidence no one will be the wiser, right? Wrong.

Smoking of any kind is nearly impossible to hide, especially from your spouse.

Unless you completely avoid all levels of closeness and intimacy in your relationship, smoking is a habit that leaves traces on even the most careful person. Showers, air freshener, mints, going outside, changing clothes, none of these actually work to get rid of the evidence - smoke always leaves signs.

Cigarettes stain teeth, leave their oils on your fingers, mints only superficially and temporarily change your breath, and clothes and hair hold the smell even with washing. And those are just the outward signs.

Dr. Kurt has seen this time and again in his counseling. And while the substances may vary, hiding bad habits, especially smoking, always causes problems. Here's what he had to say,

While chain smoking cigarettes has become less common, secret smoking has gotten really common. Here are a few examples I've heard in counseling - smoking a couple of cigarettes while drinking with friends at a Super Bowl party, sneaking into the garage late at night to smoke pot to help fall asleep, smoking crack at a party in Vegas, telling your wife you quit binge smoking cigs when you've actually just switched over to vaping. All of these have come up as issues with partners who were angry about being lied to, deceived or not being told. Hiding smoking from your spouse just makes the problem bigger and can actually create a problem where there may not be one. While none of these spouses were happy about their partner smoking, most said they could deal with that, but absolutely would not accept the deception.

If you are smoking you are also damaging your health and your appearance.

Smoke will age you and damage your skin, your eyes, and your teeth. These things not only affect your physical well-being but can also make it harder for your spouse to feel attracted to you. Eventually your inability to climb stairs without breathing heavily, your cough, and your need to disappear for a several minutes at a time will be noticed. And that’s just cigarettes.

Smoking pot or vaping create many other problems and dangers. Being high is not something you can hide, and if you are trying to you may also be putting others in danger. Trying to hide smoking pot and being high from your spouse could mean that you are also engaging in risky behavior like driving under the influence or being entrusted with the care of children. Neither of these things are acceptable and both are illegal.

Secret Smoking Dangers That Go Beyond Your Health

I have been married for 5 years with a marijuana addict. When we met, we used to dope together until I started to feel I wanted to quit. He agreed for 4 to 6 months and started again when we discover we were pregnant. He started to grow it and by the time our daughter was born we both were smoking all day long. I decided I wanted to quit and needed him to stop for the good of our baby. He agreed but lied and hid it. And this has been our marriage for 5 years. We even signed a contract to be able to work together in our family business. Again, he broke the deal and now I have resigned, and he has lost me as a worker and honestly at this point as a partner in life. I do not want to spend the rest of my life fighting every 3 or 4 months against the same issue over and over and have these arguments in front of our 5 year old who has happened to spend her childhood seeing this drama with pain and confusion. The worst part: I am pregnant again and even if he apologizes and promises to quit the lying, mistrust and anger have damaged us so much. It’s even bigger than just him being "high". If you have promised your partner or spouse to quit, DO IT before it is too late! While you can still rebuild trust and treasure your family that loves you. Please don't exchange that for something that makes you "feel good". Look out for help and work your way. Your loved ones would be proud and by your side.” – Meisa

Meisa’s story is fairly typical for couples where one partner is trying to hide their smoking habit, and her warning to others should be taken to heart.

The major corner stones of a relationship are trust and respect. When you continue with habits that are detrimental to your health and to your family’s and keep lying about it, you are destroying both. Although the concerns regarding the physical effects of smoking on a partner and children are very real, the biggest problem for many couples when it comes to hiding a smoking habit isn’t the smoking itself – it’s the deception and the mistrust it creates.

Secrets always come out and they have a way of slowly destroying relationships. They create a need for lies and sneaky behavior which will erode communication and cause partners to drift apart. These communication issues and distance can leave a relationship open to even larger problems, like potential emotional affairs as one partner seeks the company of someone who can commiserate or sympathize with their position. Eventually, without intervention, these behaviors will destroy a relationship.

What Can You Do If Your Spouse Is Secretly Smoking

I'm ruining my marriage through smoking weed. The thing is I know it yet I'm in total self destruct mode. I sit there smoking thinking about what I'm doing but still carry on. She's upstairs I'm in my man cave and she won't let me share the bed if I smoke. So we hardly sleep together. I need to stop.” - Martin

Although he’s not actively hiding his smoking, Martin is a good example of what can happen to a marriage when destructive habits are given priority over the relationship. In Martin's case he knows he has a problem and the fact that he hasn’t been able to stop means he may be facing an outright addiction. He needs help. And he will need the support of his wife in order to quit.

If you have discovered or suspect that your spouse has a secret a smoking habit you will need to handle things delicately. The fact that they are doing it in secret means that they already know you wouldn’t approve and are either embarrassed, trying to avoid being nagged about it, or think they are trying to spare you the pain of knowing their problem. Whatever the reason they’re hiding things, they aren’t likely to respond well to an aggressive confrontation over their problem.

Knowing that your spouse is actively hiding something from you can be infuriating. The anger at being lied to can make you want to yell, accuse, and demand. Unfortunately, going about things this way can lead to them feeling even worse and going to greater lengths to hide things. Chances are that your spouse or partner has some desire to quit and is struggling with their own strength and ability to do so, even if they haven’t admitted it to you yet.

I've been smoking ever since i was 18 when i went away to college and made my first friend. That friend smoked and eventually got me to start doing it too. It’s been 7 years since then and I’m still smoking. Recently my girlfriend and I have been constantly arguing about pot and she feels I’m addicted. After taking a look in the mirror (& at my finances) i think she’s right and I feel terrible. But every time i try to quit i find myself sneaking around her and smoking it. The longest i last without it is a few days. Any advice on how to permanently quit?” – Chad

Chad’s reaction to his girlfriend’s concerns demonstrate how the wrong approach can backfire. The more they argue the worse he feels and the more he tries to hide it. Rather than arguments, help is what Justin needs and that likely means professional intervention. This can be hard to accept for both the partner that’s hiding their smoking and the partner being lied to.

Unfortunately, smoking is often dismissed as nothing more than a bad habit like biting your nails or swearing too much. Many people whose partner’s smoke would like to say, "Just quit!" But it’s not that simple for most. When a person has gotten to the point of hiding their smoking from their spouse, even when it’s destroying the trust in their relationship, just quitting is no longer an option.

So if you are in a relationship and dealing with a secret smoker of any substance, it’s time to take things seriously and consider what additional options and resources you may have.

And approach your partner gently and honestly about your concerns and the need for them to quit. Working together, and potentially with the help of a professional counselor, is the best option to get your spouse to quit hiding their smoking, take care of their health, and rebuild the damaged trust in your relationship.