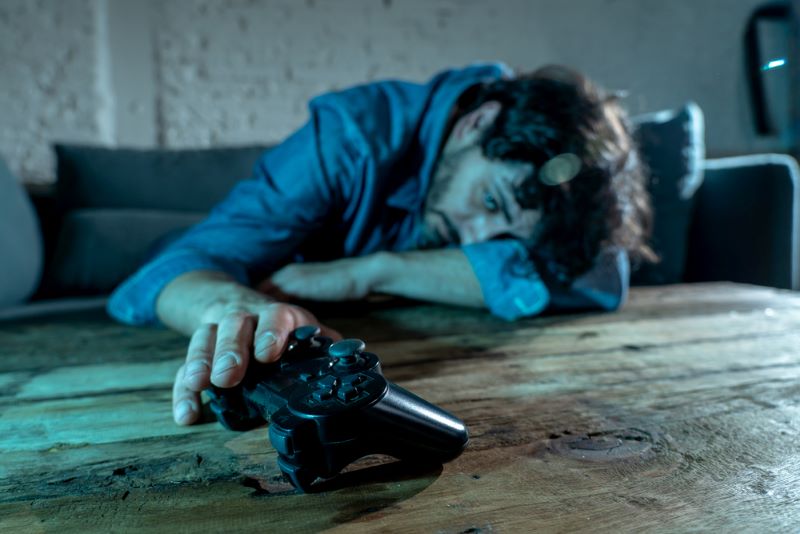 Hours spent in front of a computer screen, disregard for family and friends, little to no social life – no, I’m not describing someone overly dedicated to advancing their career. These are actually common gaming disorder symptoms.

Many of us don’t think of gaming as a disorder, but for those who’ve seen gaming disorder symptoms in a friend, loved one, or themselves, there is no question that “disorder” is the appropriate description.

Gaming disorder was only formally recognized as a condition by the World Health Organization (WHO) in 2018, but the issues that gaming causes have been clear to counselors for years. The recent two years, however, have seen the number of people suffering gaming related problems and being formally diagnosed increase dramatically. We have COVID to thank for that.

COVID had many of us confined to our homes and sequestered with a few select family members for over a year. Because of this most of us became stressed, exhausted, and anxious. So, we tried to find entertainment and relief where it was readily available, like Netflix and binging shows like Tiger King for instance. Or gaming.

Online multiplayer role-playing games (MMORPG) were popular before COVID, but the need for people to stay home, loose school and work schedules, and the desire to avoid boredom, has made them more popular than ever. So much so that instances of gaming disorders have skyrocketed.

Seeing The Symptoms And Understanding A Gaming Disorder

These behaviors trigger the reward center in our brains and create the desire to repeat and continue the process, much the same way drugs create a high that an addict wants to experience again and again.

The problem with any addiction is when you come down from the excitement and pleasure of the high you fall below the baseline from which you started. This means that to achieve that high again you need more of whatever it is that got you there.

Gaming disorder is defined by the International Classification of Diseases (ICD-11) as:

A pattern of gaming behavior (“digital-gaming” or “video-gaming”) characterized by impaired control over gaming, increasing priority given to gaming over other activities to the extent that gaming takes precedence over other interests and daily activities, and continuation or escalation of gaming despite the occurrence of negative consequences.

This goes way beyond just enjoying gaming and verges on obsession with the activity.

People suffering with gaming disorders find themselves powerless to control their urge to play, with gaming taking on a higher priority than nearly everything else in their lives, including family, work, relationships, and in extreme cases even sleep and eating.

Of course, this doesn’t happen overnight.

Typically gaming disorder symptoms develop over a period of time as the person becomes more and more engrossed in the gaming world. In fact, the behavior needs to be observed for 12 months or more, and is often triggered by major changes in life, relationships, or living circumstances. For most of us a worldwide pandemic fits that description pretty well.

So, fast forward 18 months and isolation, fear, boredom, and lack of organized sports or social opportunities have created a perfect storm for many of those who were even mildly interested in gaming before.

Here is what Dr. Kurt finds in his counseling of men and their partners,

Gaming is a normal hobby for many, many people – especially men. In counseling it comes up regularly, and most often in the form of a complaint by a partner. Although the problem isn’t usually described as the game or device itself (smartphones are used for gaming a lot now days), but rather in the problems game play causes. ‘He doesn’t remember the things I tell him’, ‘Our daughter gets frustrated because she can’t get his attention for longer than 2 seconds,’ ‘He doesn’t get the chores done because he spends his time on the weekends gaming instead.’ As you can see from these real-life examples, another symptom of a gaming disorder is the friction it causes with your partner and children."

So, how can you tell if you have a gaming addiction or were just keeping yourself amused during COVID? Well, ask yourself the following questions to see of you may have a problem or possibly gaming disorder symptoms.

If your answers to any of these questions is yes, then you very likely have a gaming problem, and maybe even a gaming disorder.

Gaming Disorder Symptoms Don’t Really Hurt You Though – Do They?

Many think of gaming like drinking coffee – it might have a few negative effects, but nothing to worry about. They assume the symptoms of gaming disorder can’t really hurt you.

Not a pretty picture, is it? It’s also not a complete list of the problems and symptoms that can arise from a gaming disorder.

Getting over any addiction can be challenging and a gaming disorder is no exception.

A person with a gaming problem may have not only become isolated and caused problems with personal relationships or work, but they can also be at risk of developing depression or social anxiety when trying to reengage in “normal” life and healthy activities.

The first step in recovering is to recognize and admit that there’s a problem. Because many games are multi-player environments many gamers assume their behavior is normal. After all, they connect with “friends” via the online gaming environment. Since others are doing the same thing, it’s got to be okay, right? Clearly not.

Once the person with the problem can admit there needs to be a change, creating that change can take time and may not be able to be done alone. Many people who struggle with gaming too much will find they need help in order to get over it. Indeed, they likely will need the assistance of a counselor to really change their behavior.

If you’ve realized that you or someone you love is displaying all gaming disorder symptoms, whether it’s COVID driven or not, it’s time to address it. In reality, there’s much more to enjoy in the real-world than there is in the online one.