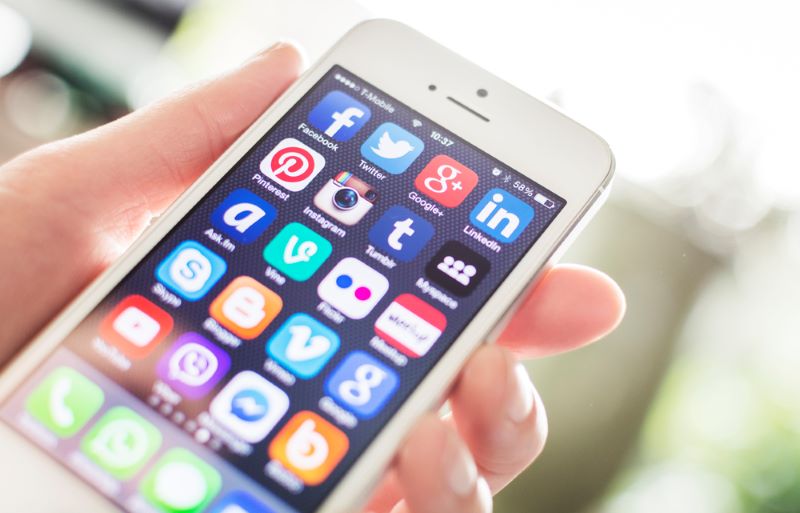 We all know someone (or a lot of someones) who can’t be separated from their phone -- and it’s not because they’re waiting for an important call. It’s most often because of social media. So when does using social media become an addiction?

“Every night after the kids go down she’s on her phone for hours.”

“He won’t even put it down when I’m talking to him.”

“We can’t talk without being constantly interrupted by the beeping.”

What are all of these partners doing? Most are looking at social media. All those people walking around with their heads down staring at their phones? Yep, most of them are on social media. A guy told me this week that the neck and shoulder pain he currently has is from using his phone so much. It’s no wonder why a lot of people look like social media addicts.

What Is Social Media Addiction?

We all know what social media is and most of us are on it. Facebook, Instagram, YouTube, Twitter, WhatsApp, Tik Tok, the list goes on and on as these platforms have become a part of daily life for most people. In fact, look at this research on the top ways people use their phones now:

3 of the top 10 are social media sites and several of the other activities are often done on social media.

It’s possible for any behavior to become addictive. An addiction is simply a behavior that is harmful and has a consistent recurring pattern. This doesn’t have to mean daily use, however. I’ve treated alcoholics who don’t drink every day, yet they’re often obsessed with drinking, depend on drinking to get through life, and believe they can’t go without it. Sounds a little like how some people treat social media?

Some common characteristics of addiction are:

This list typically describes an addiction to alcohol or a drug. But don’t these also describe how some people are with social media?

Why Social Media Is So Addictive

One of the unique things about social media, as well as smartphone use, is that typical use can easily look like an addiction when it isn’t necessarily. Yet the opposite is true as well in that what can be viewed as just typical social media use is actually a social media addiction.

So what are some of the things that make social media so addictive?

Research on the effects of social media use is increasingly showing it can also contribute to feeling depressed, anxious, and lonely, which can lead to self-harm and suicidal thoughts. It can also create or further feed pre-existing beliefs about your life or appearance being inadequate, as well as fears of missing out (FOMO).

This is very weird. We have been married for 2.5 years. I have never doubted my wife. However recently she went to her home town and while returning she met a person whom she talked all the way and she said she is flirting to pass time on a train. I was okay thinking that she was time passing. Then I saw some changes in her habit. Earlier she was not at all on any of the social media. Now suddenly she is addicted to Facebook and started chatting with that person on WhatsApp in front of me, mostly for 2-3 hours average. Some of the content she showed what they have been talking. Just normal friendly talk however whenever she gets time after work she is continuously chatting with him. I was wondering should I be worried? For now I am feeling bad as she is giving more time talking to him than me." -Fareed

What Addiction To Social Media Does To A Relationship

In couples counseling the use of phones and social media comes up all of the time as a complaint. Here are 4 negative effects an addiction to social media has on partners and relationships:

“You don’t listen to me”

“You never hear me”

“You don’t remember the things I say to you”

“The kids feel like your phone is more important to you than them.”

These quotes are all statements I’ve heard partners say to the other about social media.

My boyfriend is addicted to Facebook. He told me that he has talked to this girl every day for two years, but he said they were just friends. At one point during our relationship he was talking to her non-stop – we’d be snuggled on the sofa and he’d have his phone in his hand messaging away with her. We’d be at dinner and he’d be sending her pictures of dinner. I asked him to stop talking to her while he was with me – to BE with me when he’s with me. It still upsets me that they talk. I feel like he already crossed a line with her and I don’t know how you come back from that. Every time I see a message from her pop up on his phone or see him like one of her photos on Instagram, I get a knot in my stomach. It makes me physically ill. I tell him this, he knows it, but what’s he supposed to do? He thinks I’m unreasonable and maybe I am. But I don’t know how to be ok with this. I’m not ok with it. It’s been a year and I’m still not ok with it." -Marcy

What You Can Do About Social Media Addiction

Addictive behavior is hard to stop. It typically takes the help of an experienced counselor to learn how to change it. But here are the 3 main steps to ending an addiction. I will say these are much easier said than done.

Social media in and of itself isn’t bad. Just like alcohol isn’t bad. How we use each one, how much we use them, and the reasons we do so are the things that can make them bad for us. Since social media, just like alcohol, is so accepted in our society it can be hard to recognize when it’s become a problem. Nevertheless, social media addiction is a real problem a lot of people have and don’t realize it.

Know someone who acts like they’re addicted to social media? Please share with other readers what other signs you see.