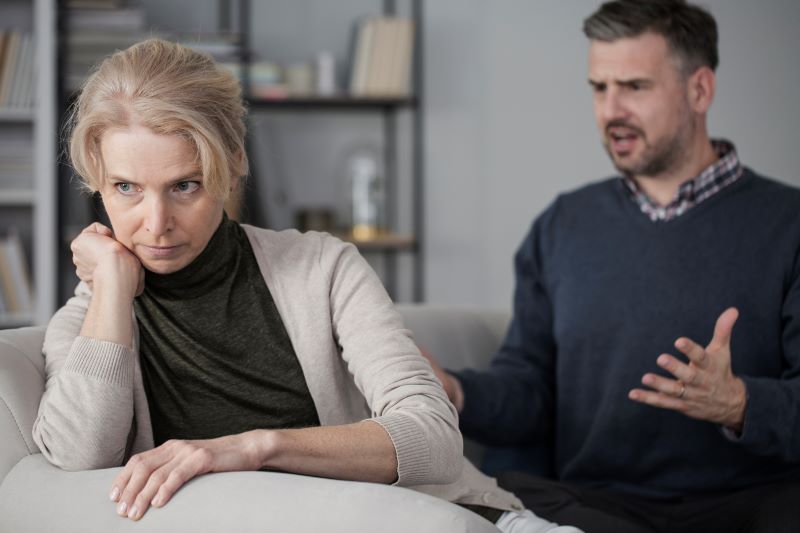 All statements made with an attempted neutral facial expression that does very little to hide the simmering emotions just below the surface. This is the hallmark of the individual dealing with their anger in a passive-aggressive manner.

We’ve all known that person, haven’t we? They have a hard time articulating their actual feelings of hurt or anger, so they express their discontent in ways that deflect from their true emotions. But not so well that you actually believe them, right?

Passive-aggressive anger is a bit like setting an emotional booby trap. If you take them at their word you leave yourself open to recriminations for not being sensitive and intuitive, and if you doubt them, you’re accused of not trusting them and implying they’re lying. It’s a lose-lose situation.

Expressions of passive-aggressive anger are immensely frustrating and can leave the object of that anger feeling exhausted and walking on eggshells. Not a healthy way to communicate or conduct a relationship. And not a healthy way to deal with emotions either. So, how do you handle the passive-aggressive communicator? And what if that person is you?

What Is Passive-Aggressive Communication?

Passive indicates lack of response or resistance to something. Reacting to something in a passive manner can be perceived as acceptance. Aggressive, on the other hand, implies confrontation and intent.

Therefore, when considering passive-aggressive demonstrations of anger, you look for both components. Think of it like a plant. The passive behavior (acceptance, lack of resistance) is the plant above ground, and the aggressive behavior (intent and confrontation) is what you don’t see underground and what’s driving the part you do see.

In a nutshell, passive-aggressive communication is a method of dealing with anger. It’s a coping mechanism that some people employ to shield themselves from facing and discussing their true feelings, or in some cases, to weaponize their anger and use it as a way to sabotage the target of their upset.

People who use passive-aggressive language or behaviors are uncomfortable or unable to deal with anger in a healthy manner. So, they resort to indirect ways of delivering their message. This can take on several forms. In all cases passive-aggressive expressions of anger are born out of the inability to face difficult feelings and their source head on, resolve those feelings, and move forward.

How To Recognize Passive-Aggressive Anger

Most of us have seen passive-aggressive behavior in action more than once. We may even have been guilty of it at times. There are, however, more ways for it to manifest than you may realize.

This becomes especially apparent in close or romantic relationships. Often communication problems in a relationship go hand-in-hand with anger issues expressed in a passive-aggressive way. Dr. Kurt has seen this many times. When asked about it he had this to say,

The connection between being passive-aggressive and angry is subtle but very powerful. It's confusing too. Leaving the receiver struggling to make sense of words and behavior that don't match what would be expected for the situation. Yet this is how a lot of angry feelings are expressed. Unfortunately, this is especially true in interpersonal relationships where passive-aggressive anger is extremely common. Most people are conflict avoidant, and thus are reluctant to directly communicate negative emotions, especially to those who are close to them. Emotions come out one way or another, so if you don't choose to do it actively then they'll come out passively, which is actually much more destructive than the emotion itself."

Below are some common examples of how passive-aggressive anger can be expressed.

Whether the person guilty of these behaviors realizes it or not, these are all forms of the passive-aggressive expression of anger. Many people are guilty of these actions do not even understanding that there’s anger fueling their behaviors.

There are several problems that arise when anger is expressed in passive-aggressive ways, both for the person experiencing the anger and for those toward whom it’s directed.

People who express their anger by behaving passive-aggressively never really resolve their feelings. The anger they feel only fuels their actions and then sits like a hot coal only to have other hot coals added as other triggers for their anger occur. Eventually all these hot coals will erupt into a fire as the repressed anger becomes psychologically detrimental or possibly dangerous. The negative feelings driving the behavior will cause mental stress that can result in depression, physical ailments, and the inability to maintain healthy relationships.

If you are the person dealing with someone else’s passive-aggressive behavior, especially if it’s in a romantic relationship, you are equally as vulnerable to psychological problems. Healthy and positive communication will feel nearly impossible and leave you confused and depressed. It can also lead to gaslighting and emotional abuse if left unchecked.

Ways To Talk To The Passive-Aggressive Person

Dealing with someone who has developed a passive-aggressive way of expressing their frustration can be tough. Chances are they don’t recognize what they are doing and certainly wouldn’t characterize it as being passive aggressive. Trying to get them to see what they are doing and change their approach will likely be met with offense, resistance, and further passive-aggressive expressions of anger.

So, what can you do to effectively communicate with the passive aggressive person and convince them that they need to modify their behavior? While there is no magic formula there are a few things that you can do that may get things moving in the right direction.

While these tips in and of themselves may not change the behavior entirely, they may help the person guilty of that behavior begin to rethink how they communicate their anger. If the person in question is suffering with anger issues that run deep and are particularly complex, they may need the help and support of an experienced counselor to really make changes.

Dealing with someone who handles anger in passive-aggressive ways can be confusing and infuriating. It can also make it difficult to have a happy and healthy relationship. If you recognize the behaviors above in someone you love, or in yourself, it’s time to make changes. If you want. I mean, whatever. I don’t care anyway. See how frustrating that can be?