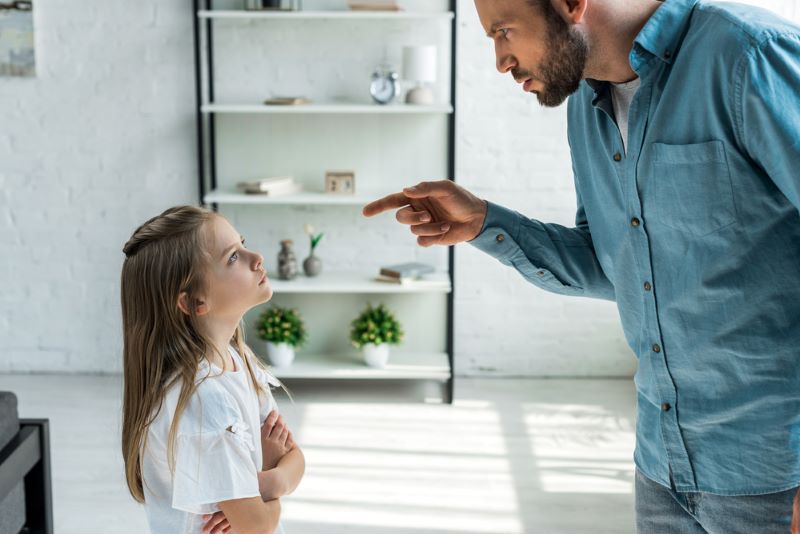 It’s pretty typical for me to hear in my anger management classes that some people only get angry in certain situations. While people can have anger that arises anytime and anywhere, this isn’t the case for everyone. And it’s not uncommon to hear this said, “I only lose my temper with my child.”

“Only with my daughter has this ever happened.”

“My kids are the only ones who can get me this angry.”

“It’s just with my son that I lose my temper.”

If you only lose your temper in certain situations or only with certain people, is it still a problem? Yes.

What makes getting angry and losing your temper a problem isn’t the circumstances, it isn’t even always the frequency, it’s the intensity of the emotion and the damage it causes. In other words, the destruction it leaves behind.

As we all understand, kids are still developing. Because of this they lack the ability to manage and protect themselves from emotional hurt the way adults are be able to do (or should be). Unfortunately, this means losing our temper with a child has a much bigger negative impact than we’d like to believe.

Do All Parents Get Angry?

Yes, ALL parents get angry with their kids. Do they all lose their temper? No, but most do at one time or another.

Parenting is hard and demanding. It’s also non-stop. You almost never get a break from it. Yet parenting is immensely rewarding as well.

Kids can also become really good at knowing our buttons and how to push them.

An important thing to understand about kids is that they have very little power in their lives. And power (or control) is something we all want. So, kids are always looking for ways to have power.

When you combine a child who wants power with a parent who has all the power you’ve got the perfect scenario for losing your temper with your child as they seek ways to undermine your parental power and control.

Why does my husband who does get stressed with work and has to look after our 4 teenage children explode with a bad temper at them out of the blue sometimes even when we have had a nice day?” -Amanda

I find it a little surprising that Amanda’s asking this question since most us know how it’s pretty easy to get frustrated and even angry at times with our kids, especially teenagers. Her question seems to be asking more about how he loses his temper at their children “out of the blue.” The unpredictability of anger is actually one of the core symptoms of an anger management problem.

Is My Temper Hurting My Child?

Over the years I’ve heard and seen some pretty horrific ways parents have lost their temper with their kids. I won’t share the worst of them with you, but here are some examples.

Many parents will apologize sometime afterward and believe this fixes it. While this is very important to do, damage has already been done that can’t be eliminated with a “sorry.”

I’m not suggesting that we should only show our kids positive emotions, That’s not real, honest or helpful for them. They need to see that all emotions are okay, even the negative ones, but they also must see them managed appropriately.

Despite what many people think, anger is not a bad emotion. It helps us, tells us something’s wrong, keeps us safe, motivates us, and benefits us in other ways, yet too much of it is also a problem.

Your temper can be harmful to your child for several reasons. It can:

I have been with my partner for 8 years and we have a 7 and 3 year old. He has always been quick to fire up with his temper but its steadily getting worse and worse. When he loses his temper now he has started smashing things around the house. When we argue we go round in circles same things all the time. I get frustrated as nothing I have said that is a problem changes. When I try and bring anything up he just starts shouting and name calling and then the aggressive behavior starts. He says he is aggressive as I have said I can’t do this any more and that I should leave him alone when he is like that - trouble is he will go upstairs or away and that is it for the night, won’t speak about it. If I try he starts again and says for me to leave and start smashing things again - but nothing is ever getting sorted. He blew up about disciplining our child. I didn't agree with the way he dealt with a situation. He started screaming, shouting, name calling again and went upstairs for the whole night. He was never like this at first - if he doesn’t get his own way he has a mood. It’s the worst with me, but he loses his temper with the kids several times a day. Our 7 year old can be pretty defiant and they get into it constantly. Yesterday he was screaming at our son because he spilled cereal on the floor. He’s 7!! I have previously been in a violent abusive relationship and can’t believe this happened again. He says he is scared of losing us but I don’t know what to do - even after the worst night when neighbors called the police he said he was sorry, but I should of left him when he got like that and I was baiting him standing there. All I did was stand there and just ask him calmly to calm down to avoid this situation. He kicked table over and smashed stuff against the wall - even then he was saying it was my fault for not leaving him. This was a result of an argument but I didn't think I was causing an argument, I was trying to have a discussion. I just don’t know what to do.” -Ridhi

What do you think the long-term effects could be for these kids of their dad losing his temper at them several times a day?

When Does Anger Cross the Line?

Again, anger is not a bad emotion. It’s okay to get angry, even at your child. In fact, it can help us communicate more effectively with them as it gives them a way to measure the seriousness of the message we’re communicating.

However, we must manage our anger, keep it appropriate for the situation and our child, and monitor the frequency of it. One of the biggest challenges of parenting is not being too negative, too often.

Some kids only hear from their parent when the parent is not happy with them, and this has a terrible effect on the development of their self-esteem.

The bottom line is that anger crosses the line when it causes lasting hurt to your child or you.

So, being honest with yourself, how well would you say you manage your temper with your child?

You very well could have a different answer depending upon the kid. Many us have a certain child that is just extra challenging. That doesn’t mean we don’t still love them. But there can be things about their personality, temperament, developmental challenges, etc. that can make keeping your temper in check with that child especially difficult.

Another way our temper crosses the line is in expressing negative feelings about the other parent in front of our child.

Where do I start... Me and my partner have been together for over 20 years. We have two teenagers. I lost my job in 2010. During that period my partner fell pregnant twice, unfortunately she miscarried, but a worse decision was made to abort second pregnancy due to the uncertainty of my employment. This last year has seen my new business get stronger and felt good that I could treat her to things such as a holiday, but the last few months she has been really off with me. She gets angry at me in front of the kids, the kids then say it to me. I feel a stranger in my own home, I have no social life, I am reminded of my failure and that I have a lot to make up to the family. I give them all I got, but it just seems that it will never be good enough...feel totally lost.” -Darryll

How To Control Your Temper With Your Child

There are a lot of anger management tools that I teach that can help anyone control their temper with their child. Unfortunately, the limited space of this article makes sharing them impractical.

However, to get you started on how to better control your temper, ask yourself these questions and spend a few minutes thinking about the honest answers.

My husband and I have been married for 4 years. This is my 2nd marriage. I have 3 girls from my previous marriage, all under the age of 14. From the beginning of our relationship I had noticed a temper problem. It has gotten worse over the years, there has been countless physical fights and yelling. (Including around and even at the children). He is a veteran and went to war 3 times. He has been diagnosed with PTSD and has tried medication and a bit of counseling. I've seen a bit of a change in his temper but has not completely gone away. I am honestly sick and tired of putting my children through this pain. He lost his temper at my oldest daughter again 2 nights ago because she didn’t do what he told her fast enough. I am considering divorce. I don't feel he will ever change. I am a Christian woman and want to do what's right by staying married but I feel torn. Help!” -Theresa

Parenting stepchildren is another complicating factor. Obviously, Theresa’s husband has an anger problem already, but being a stepparent can be really hard and easily trigger a temper.

Feeling like a bad parent because you lose your temper with your child is how most other parents feel too. It’s not true though – you’re not a bad parent, you’re a normal parent. However, learning to better manage our emotions should be a goal for all of us.

Have you ever lost your temper with your child? What did that look like? Please leave a comment and share a little about it with other readers.