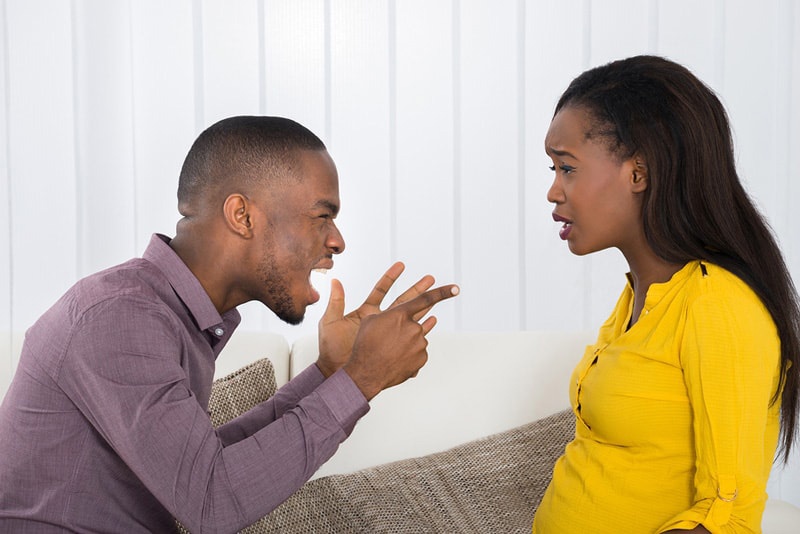 It's pretty common that the person looking for anger problems help isn't the person with the problem. Most people who need help with their anger don't realize it (been there), or deny it (done that too), or both.

It's common for people to deny there's a problem with their behavior, even when there is clear evidence of it. This can be especially true when it comes to managing anger. Emotions can be easily blamed on other people and things. We've all heard this before, "you made me feel..."

Help With What Anger Problems?

Often getting angry feels appropriate, justified, and someone else's fault. "You made me angry" is a frequent response and belief. It is also a sign that you may have anger problems needing help. The meme in this quick test for anger management is one of my favorites. The belief that other people are making us mad is one of the simplest signs that we've got a problem.

Here's the story of a guy who needs help with his anger problems, but won't admit it. So his wife is the one looking for help in dealing with the ramifications of his moody behavior.

I am struggling with the idea of divorce. I love my husband very much, he is sweet thoughtful and kind, but very controlling. He is a proud man and honorable, but his mood is killing me emotionally. My husband is an emotionally controlling individual. He will often do what I call shark behavior. If the kids goof up, he will lecture them, then he comes by and "chews again and again and again". He often has extremely high expectations and barks at the children. My husband does not "allow me" to do things, like carry in the groceries. It 's not that I am handicapped, but he will tell the children that if I carry in groceries, they are grounded. It is stupid things like this that cause resentment. He is being kind in his mind, but causing turmoil and frustration in other ways. He is often a things need to get done my way and only my way [kind of guy]. And barks if the children (teenagers) and I "learn" how to do things on our own - because he "has to fix our goof-ups because it is not done his way." He jokes about he has 3 emotions, anger, anger and more anger. When he talks, he sounds like he is complaining and nit picking. It has gotten to the point that he sounds like that all the time, and I cannot take it. I have gotten moody, miserable and hate coming home. He refuses to see he needs anger problems help and go to counseling. I am ready to crack under this presser and cannot get him to see that counseling would be a good idea. I am frustrated and defensive of his continuous barking at the children, most of the time it is unwarranted. I know he means well and he lives what he learned. He is loving and nurturing... but I can't take much more... HELP!" -Laci

I have to give this guy credit for at least acknowledging he gets angry - a lot of men won't even do that. But unfortunately he won't admit he has an anger problem requiring help and believes his feelings are justified. "If the kids would just...then I wouldn't get angry." A man in one of our anger management classes this week was saying the exact same thing about his girlfriend: "If she didn't...then I wouldn't be angry." The problem was her reaction to him, not his response toward her.

The person who loves the one who gets angry sees it. But the individual who's angry most often doesn't. Sometimes this is intentional and other times it's not. Recognizing and admitting you've got anger issues requires acknowledging something negative, bad, and often shameful about yourself. This can be hard to do for just about anyone.

Acknowledging we have a problem is tough, especially since it means beginning to accept the hurt we have inflicted on others. Not wanting to see the hurt we've caused in the eyes of those we love is a big obstacle to admitting it, yet it's also an important key to finding the motivation to change.

My partner is always accusing me of cheating. I do watch porn occasionally and have been verbally abusing her out of anger from her accusing me. It seems she loves the fighting and is ready at any hour and sometimes the finger pointing, past issues go on for days. She can't control her tongue, or timing. It's almost as if there's no respect at all and sometimes it seems as if her mouth is on autopilot. I'm so disgusted with being trapped on this wheel. I know she's been dishonest at times and I also have many faults. I'm a veteran and sober addict who finally sought treatment after much self inflicted agony. I see so much of the outrageous behavior I used to display before learning to own my dirt. I have trust and anger issues myself and combat relating PTSD. For the most part I cope until provoked. I'm on a hamster wheel at warp speed with her and it's killing me. The starting of and not letting go of things by her is horrible and always begins and ends exactly the same way almost step by step. Almost like some twisted game, nothing being her fault." -Terrance

It's not uncommon that both partners need anger problems help. While Terrance got himself to the place where he was willing to "own my dirt," he's still in a relationship where getting angry seems justified (for her too). Their relationship is a good example of how complicated relationship problems can be and anger is often just one piece of it. What Terrance and his partner need to do is step away from believing their emotion is justified by the behavior of the other and is the other's fault. Blaming and excuse making are huge barriers to changing behavior.

Unfortunately, many partners cannot take feedback from their partner. Instead of it being heard as helpful information, it's taken as an attack. This can partly be due to the way the message is delivered, as well as the circumstances in which it's said. However, most often it's just because of the position of the person delivering the message - it's their partner. It often takes an unbiased, authority figure, like a professional counselor, telling them that their anger is out of control and they need help for the message to be heard and taken to heart.

Hopefully you can relate to someone in this article. Regardless of which side you're on, the receiving or inflicting end (or both), anger problems help begins with recognizing and admitting you have a problem.

Editor's Note: This post was originally published August 25, 2016 and has been updated with new information for accuracy and comprehensiveness.