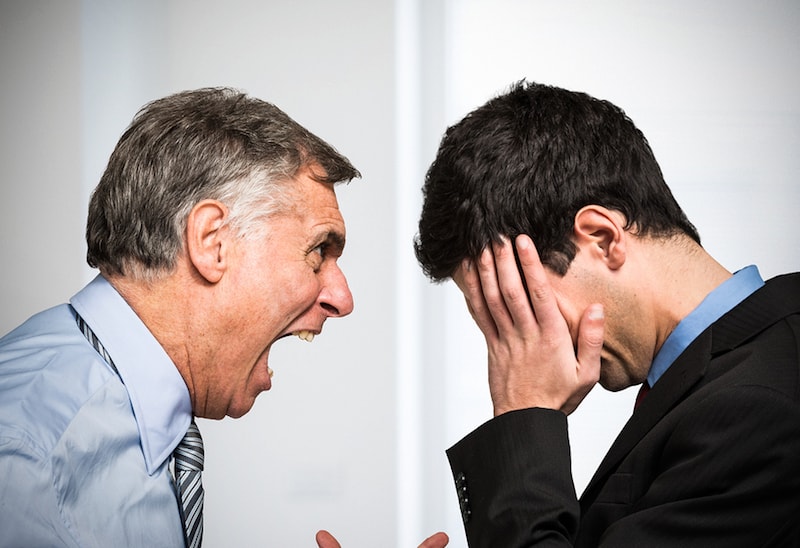 We’ve all experienced anger. Whether it’s triggered by another person, situation, or the various injustices in the world, anger is a common human feeling and response. But does feeling angry mean you have anger issues?

There’s a difference between occasionally getting angry and having anger issues.

However, knowing whether your anger is in the normal range or a whether you’re one of the many people who have issues with anger can be tricky.

The good news for those whose anger goes beyond the occasional is that there are some very clear signs of anger issues that can help you understand the difference.

Where To Start Looking For Signs Of Anger Issues

The best place to look for signs that you’ve got issues with anger is with the people closest to you.

Most people can do a pretty good job hiding anger from friends and coworkers, but it's our loved ones who see us when we're the most real.

They’re the ones we feel most relaxed and safest with, so, unfortunately, they’re the ones we’re also most likely take our anger out on. And for some of us it happens so often that it becomes a problem.,

Regular anger can cause difficulties with relationships, families, and jobs.

So, what are the signs that you have anger issues and what can you do about it?

Is it possible that because of your anger you could look like this shark to your wife, partner, or kids?

Those of us with anger issues never want to think so, but sadly, sometimes those around us see -- and fear -- us just like we all do a Great White Shark. 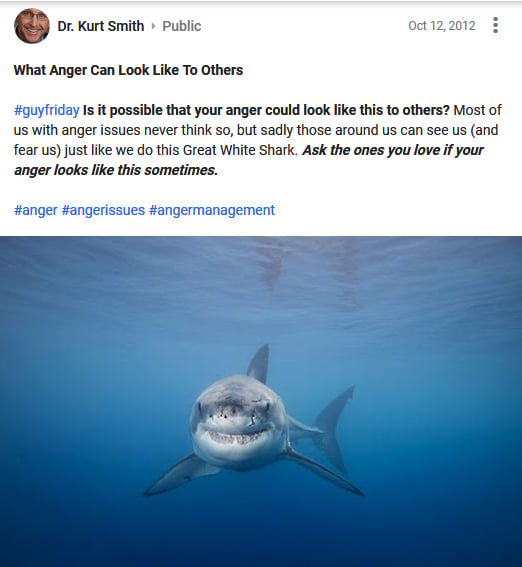 Who Deals With Anger Issues?

It's easy to assume that it's just men who have anger management problems. While it’s true that men’s anger issues can be more obvious, women are just as prone to having problems with anger as men.

Struggling with anger has less to do with gender and more to do with the psychological issues and life experiences that have shaped us.

Often there can be unresolved problems from the past, that have created an emotional struggle within a person. When left unaddressed these feelings eventually impact our ability to control our anger and respond appropriately to situations or other people.

How we think about and process events is another contributing factor.

People who are already vulnerable to getting angry can find it difficult to let go of anger or control their anger response when faced with even mild stress. This can happen equally to both men and women.

How Can You Tell If Someone Has Anger Issues?

If a person is struggling with anger issues there will be signs.

Below are some real-life examples from people who have a loved one or close friend who is struggling with anger. You'll see that these struggles can be found in men and women alike.

Could You Have Issues With Anger?

Do you recognize yourself (or someone else) in the quotes above?

If you do, it’s likely that anger has become an issue.

There are a variety of behaviors that can indicate an anger management problem – you just have to know what to look for.

So, just what are some signs that you could have anger issues?

Let’s consider the patterns illustrated in the quotes above. Here are 10 that I identified:

This isn't a complete list of signs that you have anger problems, but it's a pretty good start.

What You Can Do When You See Signs Of Anger Issues

If you recognize yourself, or someone you know, in these quotes or this list of anger symptoms, don't feel too bad.

Struggles with anger are common. The first step towards change is awareness and acceptance of the problem.

I used to see myself within this list too, but I’ve learned how to manage my anger and you can as well.

The biggest obstacle for those of us with anger issues is denying that it's true.

There’s no way to change if you can’t admit to yourself that change is needed.

It will be difficult, but also empowering, for you to be open with those you love about your desire to change. A support system can encourage and help hold you accountable with following through too.

You should know that learning to control your anger it isn't as easy as people would like to think.

However, learning the 3-fold approach we use to effectively treat anger management problems will help immensely.

If you feel anger has gotten difficult to control and you’re seeing signs of anger issues, don’t wait any longer to act.

Anger issues will lead to many serious problems. These can be prevented though if action is taken to change.

Was this article helpful in learning the signs that you (or someone you love) has anger issues? If so, sign-up at the bottom of this page to receive notice of future posts or follow me on Facebook or Twitter where I share other helpful relationship and self-improvement advice like this several times a week.

Editor's Note: This post was originally published August 27, 2015, updated on November 13, 2018 and again for accuracy and comprehensiveness.