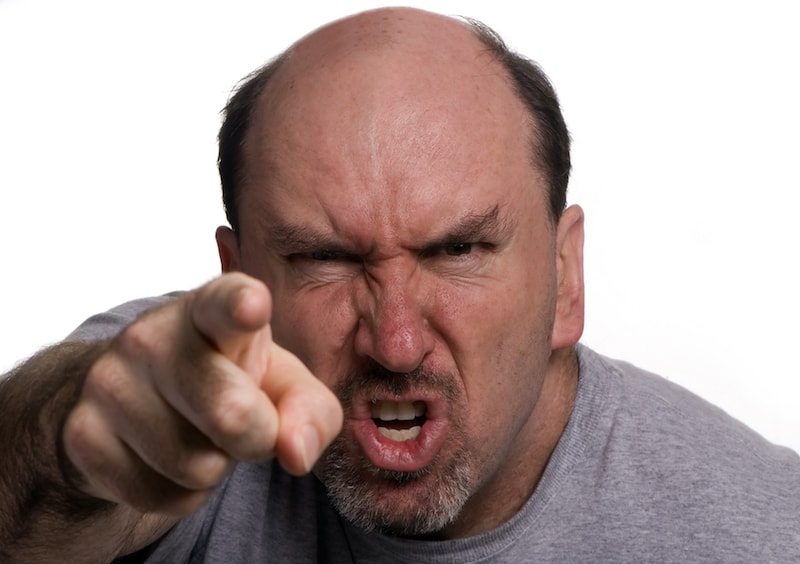 A wife who’s married to an angry man is acutely aware of it. Often, however, she’s reluctant to admit it.

This kind of angry, embarrassing behavior by a partner is usually kept secret because it feels shameful and generally occurs when others aren't around.

Being married to a man with anger issues can take a big toll on a wife, as well as to the angry man in question. Fortunately, there are options that can help each of them.

So, what is it like to be married to an angry man? Let's take a look.

What Being Married To An Angry Man Can Look Like

Here's a very accurate story of one wife's experience with her husband's anger. The following excerpts are from With This Rage, I Thee Wed, by Kim Barnes (The Oprah Magazine, October 2009).

Given that no person and no marriage is perfect, if you could pick your mate's flaw -- the one flaw you could live with -- what would it be? Nothing so slight as socks on the floor or a residual jones for Pac-Man. I mean the things we keep hidden from even our closest confidants, the things that can prove fatal to a marriage: lust, gluttony, greed, sloth, envy, wrath, and pride.

"I want a husband like yours," she told me... To Lacey, it seemed a storybook romance. What she didn't know was how close I had come to leaving the marriage she idealized. I'd never told her the flaw I'd chosen -- that Bob was a wrathful man.

And soon after we moved in together, I got my first glimpse of his rage... The lawn sprinkler that failed to oscillate? Bob beat it into the ground, gaskets flying. The chain saw that wouldn't run, he pitched against a tree until it snapped into pieces.

But one afternoon the summer we married, Bob and I were driving back from the store when we found ourselves behind an elderly woman at a traffic light. She hesitated, not sure if she wanted to turn left or right. Bob grimly rode her bumper. "Get off the road, you old bag!" As we roared by, he flipped her off;> on her face was a mix of befuddlement and fear... I sat stunned. Outraged. Speechless. Silently fuming.

Over the next year, Bob's outbursts became more frequent, until one morning, in the middle of an argument whose subject neither of us remembers, he picked up the wooden table at which we were eating breakfast and brought it down so hard it shattered. I backed to the wall. Mouth twisted, Bob grabbed my arms. "Why are you making me do this?" he said through clenched teeth. I shook my head, unable to make sense of the question, afraid to attempt an answer.

How To Handle Being Married To An Angry Man

If you're married to an angry man some of these words and sentiments likely do sound familiar.

I also often hear that these behaviors seem are focused on one person in particular – the wife of the angry man.

Sadly, anger and abusive behavior often go hand-in-hand. Anger can quickly rise to the level of abuse. Verbal abuse is most common, as well as emotional abuse, but mental and even physical abuse are a risk as well.

Probably one of the most damaging things about the man above, Bob, is the blame he places on his wife, Kim, for his bad behavior.

"Why are you making me do this?"

This is a common response in anger and other forms of abuse. Blaming others is part of the mental mind games people play to avoid responsibility and the accompanying uncomfortable feelings, such as guilt and shame.

Surely I had enough objectivity, enough perspective, to know that busting out a window with your bare knuckles -- or kicking a hole in a wall, or denting the car hood with your fist -- wasn't standard behavior. And I was beginning to fear that he might turn his rage on me.

Waiting in line at a McDonald's drive-through made Bob furious. His rage was like a sudden squall -- I spent my energy keeping his anger from swamping us all.

Torn between self-doubt and shame, I kept on keeping my secret, though I still longed for someone to tell me: How would I know when it had gone too far?

The answer came one day as Bob and I were driving down the highway to the hardware store. I was fretting, imagining the minor mishap that would turn our little jaunt into hell on wheels (a flat tire, someone's badly parked car, an inept clerk), and wondering aloud if I should have just stayed home. I had become that little old woman at the light, unsure of which way to turn.

Back home, I gave him an ultimatum: See a counselor, or our marriage was over... And maybe this is the difference between a flaw and a fatal flaw. Even though it meant exposing his failures, Bob chose to keep our marriage alive. We made appointments separately and together.

I've come to realize that you never know the secrets of someone else's marriage -- but that when it comes to your own, it's better to break the silence before the silence breaks you. I couldn't hear the truth until I gave it voice, and neither could Bob. By reaching out for help, we chose to leave the isolated island of shame and blame and hitch ourselves to something truer than a perfect marriage: a union defined by our desire to grow beyond our flaws... Today Bob's rages are a thing of the past.

When Lacey turned the tables on me, "What flaw would you choose?", I didn't give it a second thought... "Anything but wrath." And then I told her why. What I saw in her face was disappointment and relief: My marriage wasn't so perfect after all, yet somehow it had survived. Could she, should she allow her soon-to-be ex a chance to redeem himself?

As Kim's story shows, being married to an angry man is really, really hard.

Can An Angry Man Change?

Yes, angry men can change, and they need to as well. An angry man will damage or even destroy his relationships, may lose friendships, and harm his health if he doesn’t.

Unfortunately, it's very easy to pretend the anger is either not really a problem, isn't that bad, or to always be hopeful that it won't happen again. But it inevitably it does, again, and again.

Most angry men have become so accustomed to anger that they assume it’s just part of their personality. They may have also grown up in an environment where anger was just a normal part of communicating.

All of these factors can make them blind to seeing their angry responses aren’t normal or reasonable, so getting them to see it as a problem that needs to change can be really tough.

For almost every man who’s dealing with anger issues real change will require assistance. Such as –

I've worked with a number of wives who can vividly relate to these experiences. If you could be an angry man with an anger management problem, I hope you'll follow Bob's example and get some counseling help through anger management classes.

If you're a wife like Kim, married to an angry man, do what she did:

Can you relate to any parts of this story? Married to an Angry Man? Please share your experience with others in a comment below.

Editor's Note: This post was originally published December 19, 2009, updated on October 25, 2017, and has been updated again with new information for accuracy and comprehensiveness.