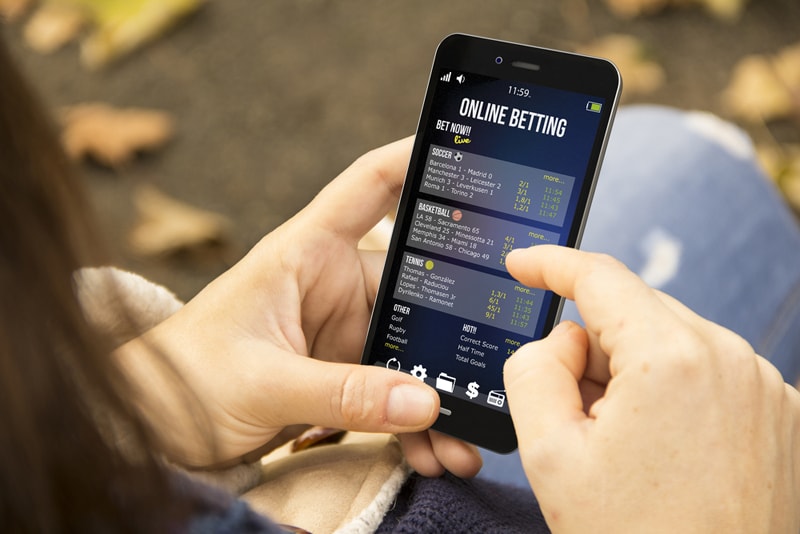 What do you think comes to mind when a person is asked to think of someone with signs of a gambling problem? Most people would probably imagine someone slumped over a casino slot machine at 3 in the morning, or a person who can't walk away from a blackjack table no matter how much they've already lost.

While those are both true and still happen thousands of times a day (or more), they really don't best describe modern-day gambling. Today the signs of problem gambling can look very different, and arguably not like a problem at all.

Nearly everyone is on their phones all of the time now. It's so normal to see people responding to texts, checking Facebook or Instagram or Snapchat, or playing a game. My wife and I were in a restaurant last week and she commented how odd it was that at a table of four people one person wasn't on their phone - usually everyone is. But some people are doing more on their phone than just being social.

The nearly universal availability of smart phones has changed gambling forever. I've been in countries where they don't even have electricity everywhere and yet nearly everyone has a smart phone connected to the Internet. It's actually a crazy sight to see how tech device use has grown faster than the modern technology necessary to support it.

I'm due to give birth to my son in 3 weeks time. My husband has just left me and told me he doesn't love me anymore but he will always be there for me and baby. We have only been married 10 months during which time he's neglected me and sat there gambling on his phone everyday. He's been a bad husband and thinking back if anything I should of left him! I love him and the closer I get to the birth of my baby the more devastated I become at the thought of us not being a family. He's not even willing to try with me." -Liz

Even though most of us think of gambling as risking money it doesn't have to involve money. Fantasy football is very popular and can be played just for fun without having money involved. Yet it is a form of gambling. But sports and gambling can include money as sports betting was legalized in the United States this year by the Supreme Court and is becoming more and more wide spread on sites like DraftKings and FanDuel.

Investing in the stock market can turn into a type of gambling. Day trading was a bigger problem a few years ago, but still exists. More recently the rage has been investing in (it's really betting on) the rise of Bitcoin and other cryptocurrency stocks. There's a forum on Reddit called r/wallstreetbets where readers challenge and chastise other over for their risk taking in the stock market.

Gambling offers the thrill of high risk and high reward, which has a strong appeal for a lot of men. The fact that you can now do it any where, any time with a couple of swipes on your phone has made phone use another potential gambling sign.

When Does Gambling Become A Problem?

Unfortunately, gambling can be like many other addictions in that you don't always know it's a problem until it's already become a big, big problem. The secrecy that accompanies addiction makes it a challenge to know what's really truly going on. Not only does secrecy, and the deception and lying that comes along with it, make it difficult to know if someone is a problem gambler, but secrecy in of itself is destructive to relationships too.

Obviously, the loss of money and accumulation of debt makes gambling a problem. How much is too much though? Everyone's situation is different. For some, losing $500 means not being able to pay the rent. For others, a couple of more zeros have to be added on to that number to make it really painful.

I have been married for 24 years and have two kids 20 and 14. My wife has gambling problem and lost all of her savings $50,000. She lied to me telling me that she was going to Bloomingdales instead she went to the casinos. Well that chapter is over but she still plays Scratch Offs and Daily Numbers, so I took over the finances and she was not happy about it, and complains about money all the time and we fight a lot. Just this weekend things were pretty cool no fights and I work all weekend and she went to see her sister in a different state for a few hours with her other sister and niece. That Sunday night I was watching TV and she said thank you for dinner and a said ur welcome, out of no where she complain about money and here we go, fight and argue." -Jerry

While the amount of money that's acceptable to gamble can vary from person to person based on their financial situation, the harm that it can cause to the individual and their relationships is the same for everyone. The signs of a gambling problem often first show up here with the damage done to the gambler and their partner. Depression and anxiety over bets and losses is common. Deterioration of communication, intimacy, and trust within the relationship are other usual signs.

Jerry and his wife are a perfect example of when gambling becomes a problem. It certainly can be argued that just about anybody losing $50,000 makes their gambling a big problem. But another problem sign of Jerry's wife's gambling addiction is their regular fights over money. This is how a relationship gets negatively affected and not just the bank account.

What Are The Signs Of A Gambling Problem?

We've discussed a number of not so obvious gambling problem signs already, like excessive phone use, secretive behavior, and depression. Here are some others:

Remember, gambling can be a problem even if there are no money losses. The wife of a man I counseled a couple of years ago played mahjong with friends just for fun 3 days a week. But it became a problem for their relationship because of how obsessive and intrusive it became in their relationship. They couldn't even talk about it without me present to be a referee for their fighting.

Why Won't My Husband Stop Gambling?

There are a number of reasons why someone won't stop gambling even though it's become a problem. While the complete answer is different for everyone, there are some common variables affecting all gambling addicts. I'll briefly describe a couple of the biggest ones.

Gambling causes a release of some very powerful chemicals in our bodies. A series of circuits in the brain form what is called the reward system that releases dopamine, the same pleasure chemical released when having sex, as well as endorphins that reduce pain. This combination of simultaneously feeling pleasure and less pain is part of what turns gambling into an addiction.

"Endorphin rush" is a term that describes this chemical event and is often associated with physical exercise, but it can occur with other activities too. Some people, often men, seek out this natural rush or "high" and want to experience it again and again. This is one of the reasons someone can start gambling just by joining a fantasy football league and almost overnight be betting online on college and professional games.

Not only do these brain chemicals provide relief for stress, anxiety, and even depression that can be arising from other places in a person's life, but problem gambling also creates more stress, anxiety, and depression. The vicious circle of temporary relief followed by more pain needing more relief drives the addictive cycle and is a big part of why a man won't stop gambling.

My boyfriend is a problem gambler. I am ready to kick him out. Very, very sad. My life (and his) is not being taken care of due to his non stop lies and not ever having money or making plans with me to live a normal life. He works all the time but never has money or time to live life. He is NEVER on time and always makes promise and never keeps them. I am on unemployment and trying to focus on my next step in life. It's hard because I am paying all the bills (its my apartment) and he doesn't help. He promises but 'something' always happens, even with food, soap, groceries. He doesn't buy anything. I am enabling him and I can't afford it myself financially or emotionally. I drink and smoke and do not take care of my health. He says he wants to get better but he also dreams of winning a big pile of money to 'fix everything' -- typical gambling addict." -Nora

We're all drawn to ways we can escape our lives, even if just momentarily. Just some of the forms of this include movies, novels, music, and vacations. Gambling, with it's accompanying chemical cocktail, provides just that - a way to escape. The need for a way to escape is another reason why a man cannot stop gambling. You can see it in Nora's husband's pursuit of a financial escape that will "fix everything."

The signs of a gambling problem aren't as easy to see as they used to be. When your husband is on his phone is he on ESPN or DraftKings? So much of online behavior is considered normal today even though it's damaging. There are a lot of subtle gambling clues described in this article. So if you suspect that someone you love may have a gambling problem, re-read this post again and make a list of the possible signs. If you list more than a couple, then you need to have a conversation with that person or talk to an experienced professional counselor who can help you sort through what is likely a lot of uncertainty.