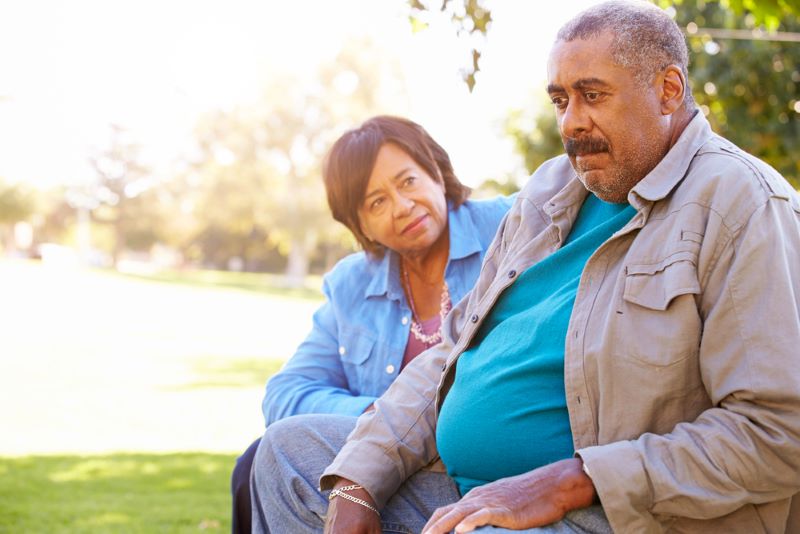 He seems down, but says he’s “fine.” You think he’s more irritable than usual, but he says it’s not him it’s everyone else with the problem. Yet you know he’s just not his usual self. These are all examples of why denial can be one of the biggest obstacles for you to help your depressed husband.

Part of it is that age old conundrum – men won’t admit they need help or ask for it. So how do you help them?

And since most men also won’t talk about how they feel, how will you ever get your husband to even admit he’s depressed and help him?

Those are really good questions. The answers aren’t simple. Let me explain.

A lot of depressed men are actually functionally depressed. They still do things. Often their routine doesn’t look much different. A guy I talked to this week who has depression is still getting up and going to his job every day, he’s just also up most of the night binge watching Netflix and gaming on his phone.

Another guy works too, but also goes to the casino a couple of times a week and smokes pot every night so he can fall asleep.

Here are a few common signs of a depressed man:

Check out this article for more symptoms and examples of men who are depressed.

My husband suddenly confided in me that he wasn't happy last week. He said he still loves me, but has considered leaving. He says he just wants to be alone, but still enjoys being at work & spending time with our three kids. He refuses to hug, kiss, or have sex with me, even though I've been through the most hellacious ordeal of putting my dad in a home while all this is happening. All his friends say they are sure he still loves me, just needs to ‘get his head on straight.’ He has made an appointment with a counselor because he says he feels like a failure, and feels unlovable. Is it just depression? If so, why is he only focusing his negative feelings on me? I love my husband, respect & admire him, & thought our marriage was fine! Should I cut my loses & just get on with my life in hopes that I can find someone who actually loves me? That isn't what I believe in or what the Bible says, but I'm desperately lonely.” -Abby

Abby’s husband is good example of the kinds of confusing behaviors that come from depressed men and make it hard to help them.

And the reason his words, behavior, thoughts, and feelings are so confusing and contradictory is because he’s confused too.

What If He Won’t Admit He’s Depressed?

You should pretty much expect that your husband won’t say to you that he’s depressed. Hoping for otherwise is going to leave you frustrated and disappointed.

I’ve treated men with depression for months and they still never say it, even to me, their doctor. Notice how Abby’s husband doesn’t admit it either? He talks about the symptoms, but won’t actually use the word.

Eventually I get most men to admit it after I help them better understand how the way they’re feeling is normal, happens to every man, and get them past the male stereotypes (don’t talk about feelings, admit you have a problem, etc.) getting in their way.

It’s helpful to know that he doesn’t need to admit to you, or even to me, that he’s depressed in order to deal with it. He can call what’s going on with him whatever he wants. He just needs to admit something’s not right and want to fix it.

Believe it or not, but you can actually help your husband with depression without ever using the word.

So, if you’re pressing him to acknowledge what everyone else can clearly see, he’s depressed, save your energy and avoid the emotional drain.

How To Help Your Husband With Depression

Watching someone you love struggle and hurt is really hard. Living with it and having it directly impact you makes it even harder.

Unfortunately, when the problem is an inner one like depression, how you can help and what you can do about it is limited.

For most of us our natural response when we see a problem is to want to fix it. While this is a common response by men, women do it too. And when the problem is hurting someone we love, we especially want to go into ‘fix it mode.’

There is a very important truth you need to remember – you can’t fix it. You’re probably going to have to repeatedly remind yourself of this going forward too because it’s easy to forget.

What you can do instead of fix is influence. This subtle shift in your approach as to how you help your depressed husband will be huge in the results you can get.

So, as you continue to read, please keep in mind that our goal is to influence your husband and his response to feeling depressed, not to fix it. Only he can fix it (with some help).

I am a wife who is feeling totally rejected. My husband told me after 34 years that he is no longer sexually attracted to me. He said no more sex or kissing. I am devastated. He said I am attractive and he loves me very much and wants to stay married to me forever. Just no intimacy. I am dying. He has for the past ten years suffered with ED. I also believe he has depression because he said he feels numb or dead inside. It scares me but he refuses to share anymore. He had major back surgery 8 years ago and it wasn’t completely successful. Lots of pain, lost his ability to make the money he was making then. He has gone into a funk ever since then. He left and we separated in 2015 for 14 months because he was so unhappy with his life. He came back and everything was good, I thought, having sex regularly. He was affectionate. Let me say that during part of the time we were separated he met a woman. We discussed it and he told me nothing physical happened, which I never believed but I told him I would work through it. I don't believe he's having an affair now. He's just not into me. He seems to be angry, short tempered and sad all at the same time. He refuses help. He told me he isn't interested in sex with anyone and he doesn’t find me sexually attractive even though he says I am physically attractive. Forever is a long time, I am hoping to reconnect on an emotional level by starting over. I will be supportive, appreciative, and complimentary. I know there is no quick fix. I need to work on myself. However, I am so rejected and feel awkward with him. At a loss about how to help him with his depression.” -Veronica

Veronica’s right, there’s usually no quick fix. And part of the way she can influence him is by working on herself. By doing so she will be modeling for him, not telling him, what he needs to do too.

When Your Husband Refuses Help

It’s really tough to watch a person you care about hurting. Especially when they’re stuck, not doing anything to change their situation, and often doing things that make it worse.

Unfortunately, this is most often the case with a depressed husband.

Hi, trying to figure out why my husband is so confused. Came across your website and found it very interesting. I told him I thought he is depressed and has been for years but refuses any help. He left last year for 9 months but told me a few days ago he came back because other people wanted him to but he made no effort to change. My counselor suggested that he was depressed but he does not want to take meds. He says his feelings for me have changed, he cares for me deeply but not in love. We have two adult children who are very angry because it is always about what dad wants no matter. So he is willing to give up his family and home to move into an apartment still stay friends if possible and still see his kids and granddaughter like before if we divorce. When I looked at your list of symptoms of man-o-pause, it pretty much hit the nail on the head with me. He had cheated on me once that I know of, flirted, porn, lost weight. I am not sure I am ready to give up on him after all of the hurt if there is something causing this that has been going on the last 10 years or so. It is easier for him to give up than to work on things. My kids want me to kick him to the curb. I am just having a problem having him be ok living a very lonely life if he goes through with this. Scared and thank you!” -Jenn

One of the things I hope you take away from this article is the importance of accepting your limitations. This is what Jenn needs to do.

I don’t say this because I don’t care about your husband, or want things to change for both of you, but because I want you to be successful in getting him to change while at the same time minimizing the damage to yourself.

No one can change what’s happening psychologically inside someone else. So, the question is not how do we change them, but rather how can we best influence them to change themselves.

Like a lot of wives with depressed husbands, Jenn has herself mentally stuck. She still loves him so she’s struggling to accept his choices – “I am just having a problem having him be ok living a very lonely life.” Unfortunately, she has to accept them if she’s going to keep herself mentally healthy.

If you’re asking – “How can I help my depressed husband?” – the answer is to focus on influencing not fixing, along with accepting your limitations. Neither is easy for sure. However, with this approach you’ll have the most impact and a realistic goal you can accomplish.

Think your husband is depressed? In what ways have you tried to help him with his depression? What’s been his response? Please share your experience with other readers below.