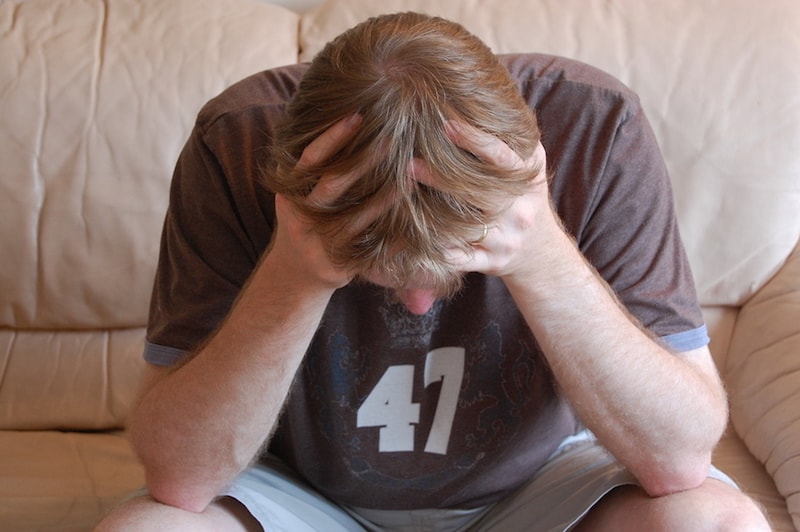 It’s no secret that depression is a difficult and sometimes dangerous condition. It takes a toll on the individual suffering and their relationships. If you’re married and think your husband is depressed it can even put your marriage in jeopardy.

In the first article, How to Save My Marriage - When My Husband Doesn't Love Me Anymore, we introduced you to a couple, Carrie and Al, who are dealing with several issues threatening their relationship.

Let's continue looking at Carrie's description of her marriage. With the problems they’re facing she's now wondering, "Is my husband is depressed?"

Indications Of Depression In Your Husband

Carrie's husband is unpredictable. His,

all seem odd and hard to gauge.

Carrie says she walks around on eggshells because of it.

But could this really be a sign her husband is depressed?

The list of symptoms for depression can vary, but for men

So, the idea that Carrie’s husband could be depressed isn’t a reach.

As we talked she said that to try to keep the peace, she often has to tell their 6- and 10-year-old kids to,

Let Daddy have a pleasant evening."

Despite her peace keeping efforts, she says his anger is becoming more regular.

At Christmas dinner, in front of the whole family, he screamed across the room at her,

If you want to stay married to me you'll never do that again."

She cried in her hands as she recited to me in counseling the numerous ways he degrades her and hurts her with his words.

At other times, Al tells her he doesn't deserve her and says he knows his anger will lead to the end of their marriage. She often wonders if he's given up, if he's having an affair, or what his Facebook page may contain.

She tried to kiss him last week and he turned away saying,

After telling me this, she said to me,

I think my husband is depressed. What do you think?"

Additional Signs Of Depression In Your Husband

Carrie’s right to be concerned about depression in Al. She’s also taken a positive step by seeking help. The depression in her husband isn’t something she can effectively deal with on her own, and he’s not in a position to recognize what’s going on and deal with it himself.

Carrie and I talked more about what depression can look like in men. I told her in men it often looks just like stress.

Some of the most common depression symptoms in men are,

These can look like grumpy, or an emotional roller coaster, much like the eggshells Carrie walks around on.

For some men depression may also manifest in a lack of ambition or energy.

He may be indifferent to everything, and simply allow his wife to make all the decisions. Or he might withdraw completely from all social or family interaction.

Based on everything Carrie’s told me, it wouldn't be surprising if her husband Al truly is depressed.

A lot of men are depressed and don’t realize it. With men in particular it can be hard to tell since the symptoms can vary quite a bit and be somewhat vague.

In fact, most men, when they get depressed, still function quite well in many areas of their lives, particularly professionally. This means the external symptoms can be misleading.

The signs are most often evident in their interpersonal interactions, particularly with loved ones.

One of the challenges with this is that the symptoms can come on gradually. By the time they’re evident to those around him they may just seem like a regular part of his normal behavior. It can be weeks or months before the people he’s closest to stop and realize there is something wrong.

Another problem with depression in men is that they (men) are very good at explaining away their behavior.

They often don’t even recognize themselves that their behavior has changed. It isn’t uncommon to hear a man suffering with to put his actions off on things like,

And there likely is some connection between his behavior and these things.

But with depression the response is often disproportionate to the problem and sometimes extreme in nature (remember Al’s “I hate my life and myself” comment?).

How Your Husband’s Depression Could Be Affecting Your Marriage

Carrie is clearly unhappy and struggling. Her marriage has become a source of significant of stress and difficulty.

As Carrie and I talked she kept crying. She just couldn't forget the feeling that "He doesn't love me" and kept questioning how that could be connected to his mood.

"How can I save my marriage?" she asked.

I suggested to her that he may still love her despite what his actions show. However, that love has been covered over and she just can't see it right now.

can all mask his love for her and make it difficult for him to show or even recognize it.

The good news is that with help those things can change and it's possible she could see him begin to love her again.

Everything Carrie’s described above are signs that Al very well could be depressed. But it's also likely that's not the only thing going on with him.

Clearly he has an anger management problem, possibly brought on by depression, and his behavior towards Carrie has become abusive.

But I wonder if those are only occurring because he's depressed or if they're signs of other problems?

For example, for many men depression goes hand-in-hand with a midlife crisis.

Carrie is far from the only wife asking, "Is my husband depressed?" Depression in men is more common than people realize and often goes undiscussed.

For some wives, however, all they have to deal with is a husband who's depressed.

For others like Carrie, she likely has a depressed husband, but she's also got an abusive husband and a man with a serious anger management problem.

If you can relate to Carrie or feel like your husband is suffering from depression, keep the following in mind:

Carrie and Al are actively seeking help and support. If you think your husband is depressed too and you’re trying to save your marriage, follow Carrie’s example and get help.

In what ways can you relate to Carrie? Does your husband look something like hers?

This is the second post of three examining a marriage in which a wife feels her husband doesn't love her anymore and she seeks the expertise of a marriage counselor for help in finding out what she can do. You can read the first post, How to Save My Marriage - When My Husband Doesn't Love Me Anymore here. In the third and final post, I Can't Get My Husband To Change, we take a look at some things Carrie can do to change her husband and save her marriage.

Editor's Note: This post was originally published February 23, 2010, updated on August 30, 2014 and October 9, 2018, and has been updated again for accuracy and comprehensiveness.