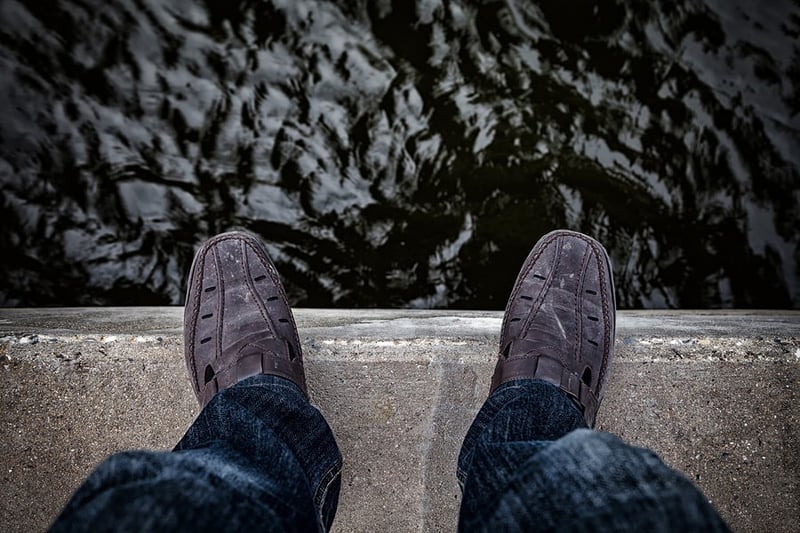 When Robin Williams died the world was shocked. How could someone who seemed to have it all want to take his own life? It was one more sad example of what suicide in men looks like.

What the world didn’t know at the time is that Robin Williams was suffering from long-standing and severe depression. One of the unfortunate things about his death, and that of other men and the depression that can lead to suicide, is that both are far more common than people realize.

Let's talk about what suicide in men often really looks like.

I had a patient recently take some sleeping medication and then follow that up by drinking a bottle of gin (the large handle kind). He claims he wasn't trying to kill himself. Nevertheless, this is what suicide in men often looks like -- an emotionally driven poor decision.

He ended up in the emergency room with his blood alcohol content over 5x the legal limit (+.40), and his liver and kidneys shutting down. The doctors said he was lucky to have survived.

Most people when asked would probably say that suicide in men is likely to be done through extreme means like by gun, car, hanging, or even jumping off a building or bridge.

While this is true, not all suicide in men is violent. I've had a number of men I've worked with over the years, intentionally or unintentionally, consumer alcohol or medications, or both, and nearly kill themselves.

Because these men are hiding their depression with these things anyway, loved ones can view their consumption as part of normal behavior. Yes, maybe they drink a bit too much or seem too reliant on pain meds, but those can be easily overlooked also as signs of suicidal behavior.

The guy above survived. He still insists it wasn't his intent to kill himself. Nonetheless, his wife and kids could have been attending a funeral last week rather than sitting in my office talking about his poor choice of how to cope with how he was feeling.

Tough Guys Can Be Suicidal Too

Nearly everyone who has followed the NFL knows Junior Seau -- one of the toughest guys to play professional football. Sadly, in 2012 he became another example of suicide in men when he put a gun to his chest and killed himself.

Here’s what a couple of ex-NFL players had to say about Seau, suicide and men:

"One of the baddest dudes may have just killed himself ... Yeah, y'all real tough. Life after football is REAL ... grown ass men struggle emotionally ... young boys don't see the end ... it's coming. Life lesson today. RIP Seau," - former Saints and Browns offensive lineman LeCharles Bentley on Twitter after Seau's body was found (Violent Sport Has Its Day of Reckoning).

This notion of why he didn't seek help was real simple. He was too proud. He didn't have the mindset to seek help because all you're taught when you're playing football is to not show weakness. You have to feel like you're an invincible human being to play the game." Gary Plummer, former teammate of Seau (Tragedies of the 1994 Chargers).

One of the new risk factors for suicide in men is now middle age. While younger men used to be at the greatest risk, this has changed in the last few decades.

(Robin) Williams was also in a demographic that is particularly vulnerable to suicide . . . White, middle-aged men with medical problems are at the highest risk for suicide, he said. It's not entirely clear why that is, but Dost Ongur, an associate professor of psychiatry at Harvard Medical School and chief of the psychotic disorders division at McLean Hospital outside of Boston, said

This idea of control and virility and being able to deal with the world in a certain way – as that starts to slip away, there's often a sense of loss of control and threat to one's manhood, and that seems to be associated with higher rates of suicide."

Guys, listen to what LeCharles said above, "grown ass men struggle emotionally." It’s normal -- and many of us need counseling to learn how to handle these emotions. I've had to do it. And so have many other guys who are better off for being strong and brave enough to ask for help.

How To Get Help If You’re Having Thoughts About Suicide

Suicide is a permanent answer to a temporary problem. Know that whatever is going on won’t last forever and there are people who can help you. Not only are they there to help, but they’re also there 24-hours a day, everyday, no matter where you are.

If you’re wrestling with suicidal thoughts, help is available 24 hours a day, 7 days a week at the National Suicide Prevention Hotline (800-273-8255). If you want to talk to someone face-to-face, there are counselors like me available locally and nationally who can help too.

Even if you’re not actively considering suicide, but struggling with difficult feelings and emotions, there’s help available. And if you recognize behaviors in someone that look like they could become dangerous there are ways you can get help too.

The key is you have to ask for help.

Suicide in men doesn't end the pain -- it just passes it on to other people. Just ask the friends and family of Williams or Seau about the pain they now feel. There are much better ways to make the pain go away.

Editor's Note: This post was originally published on May 19, 2012, updated on August 24, 2014, and has been updated again with new information.