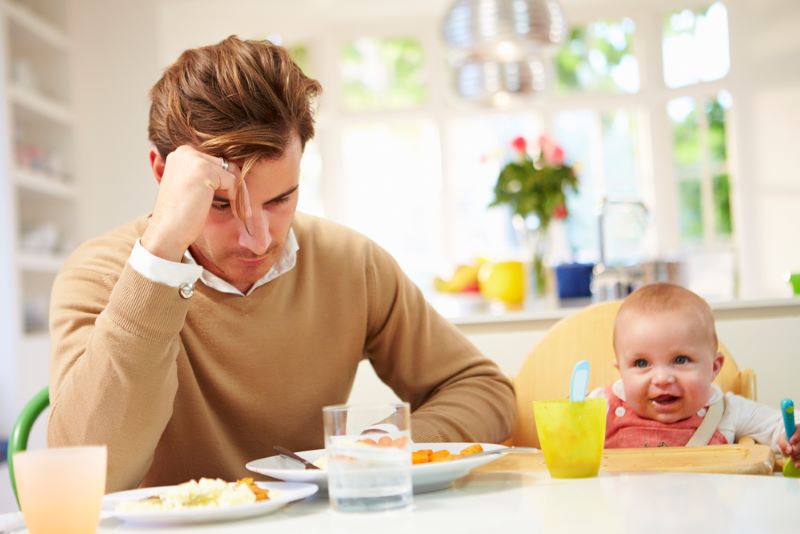 Do you know a depressed dad? Chances are you do but don’t realize it. Depression in fathers is more common than even fathers themselves may realize.

What people say: “Parenthood is a wonderful thing that brings joy and fills your heart.”

The truth: Parenthood is hard, and it’s not all joy and warm feelings. It can challenge every part of you and leave you questioning everything you thought you knew.

What people say: “Moms have it the hardest and bear most of the emotional burden and hard work.”

The truth: Being a father is complicated and often difficult for men in ways that never get noticed. As a consequence, there are a lot of depressed dads out there suffering silently, never getting the help they need, and the repercussions on their lives and the people they love can be significant.

It’s easy for depression in men to go unnoticed. Men process and express emotions differently than women and typically with much less transparency.

And when it comes to parental depression, it doesn’t occur to many – including the dads themselves – that depression could become a factor in their role as a father.

Is A Dad’s Depression Different Than A Mom’s?

Generally, men are less likely to recognize when something’s wrong with the way they’re feeling than women. This lack of awareness can be exacerbated by fatherhood.

Becoming a father can come with anxiety and worry as well as joy. This new level of responsibility creates pressure and sometimes deep feelings of insecurity.

A man’s experiences with his own father, both positive and negative, as well as the expectation to protect and provide are often to blame.

It’s hard to protect and provide if you’re feeling weak and vulnerable, so even if a man suspects he’s depressed, he’ll most likely ignore it.

Women – moms – on the other hand, are not only expected to be emotional and vulnerable, but they’re also more accustomed to recognizing the nuances of their own feelings. So, if they’re feeling something that seems wrong or out of place a mom’s internal alarms often go off.

There’s a lot of focus put on a mom’s well-being, even well beyond their child’s infancy.

Yes – these things are all true. But the same is rarely ever said for dads, and they should be.

All through the parenting journey, women maintain a soft spotlight with friends, family, and even physicians keeping an eye on their mental health.

Because of this many (most) depressed dads quietly deal with difficult or confusing feelings that never really get discussed.

Can Fatherhood Cause Depression?

Fatherhood and depression are not a 1:1 correlation. In other words, just being a father doesn’t cause depression.

However, being a father does create new stressors and exacerbate existing ones in such a way that a man predisposed to depression may find himself in its clutches.

Well, answer this: How would you describe the quintessential dad?

A dad’s supposed to be made of steel and be able to fix everything. Except they’re not, and they can’t.

It’s a tall order for anyone. Most men would be happy if they felt like even half those adjectives were true.

Intellectually we all know – men too – that dads are fallible humans just like we all are. That doesn’t stop us, or dads themselves, from assuming that they all should always be in Super Dad mode.

It’s no wonder that many dads end up suffering from depression.

These are all things men live with. Throw all of that in a pot and add,

And you have a recipe for a depressed dad.

Dr. Kurt works with men routinely that are battling depression and doing their best to be a good dad at the same time. He knows how the challenges of fatherhood can feed depression.

According to Dr. Kurt,

Any guy can father a child, but not every guy can be a dad. There's a difference - a big one. And that difference is one of the factors that leads to depression in dads. What's our relationship with our child supposed to look like? Many of us don't have much of a role model to look back on for guidance, so we're winging it as best we can. Many dads tell me they don't think they're doing a very good job at it either. And to say men get confusing messages from our culture today is a huge understatement. Making it even worse is that unlike for a lot of moms, being a dad doesn't come very naturally for some guys. Add it all up and being a dad is hard, which can make any dad depressed at times."

Depression related to being a father can occur anytime, but often it’s related to phases of life. There are times in life when anxiety and difficult feelings come into focus in ways that are hard to deal with, thus leading to depression.

Some of the most common are:

Seeing depression in a father, just as in men in general, can be hard.

Men won’t typically say, “I’m depressed” because they either,

So, it falls to those who love them to recognize what’s going on and help in whatever way they can.

Helping, however, means knowing what depression in a dad can look like.

Some of the key signs of depression in a father are:

Truly, any major change in behavior or behaving in extreme manners should be investigated. This is also true for everyone.

What Are The Effects Of A Father’s Depression on His Children?

Depression in a parent is experienced by the entire family. It can create a level of dysfunction leading to each family member feeling isolated and growing apart from one another. This can be especially detrimental to young children.

There’ve been many studies on how parental depression affects a child’s development. To put it in the simplest of terms, depression in a father will harm his children, no matter what their age.

No matter how you slice it, a depressed dad will leave a mark on their children’s emotional state and affect their behavior.

How To Help A Depressed Dad

Dad or not, a person suffering from depression needs help and support.

Untreated depression, especially in men, can lead to,

And in the worst cases,

If you suspect a man you care about is suffering from depression it’s time to intervene. These steps can help you get started:

You’ll also want to be prepared for pushback.

If the man in question is just realizing that he’s dealing with depression, it may take a while for him to realize he needs help.

And if counseling is in order, it may take even longer for him to agree to that.

Depression is tough for anyone. But being a depressed dad has the additional complication of trying to parent while navigating depressive thoughts and feelings.

If you or a dad you love could be suffering from depression, keep the following in mind:

Being a parent can truly be an amazing and fulfilling experience. Almost all parents will tell you that having kids is the best thing they’ve ever done.

That doesn’t make it easy though, and it’s not a daily series of proud moments and adoration. Depression in dads can and does happen.

Dads need as much support as moms, so if you suspect you know a depressed dad, don’t be afraid to reach out.

If you suspect that someone could harm themselves, or you’re struggling with suicidal thoughts yourself, the National Suicide Hotline is available 24/7 at 800-273-TALK (8255).