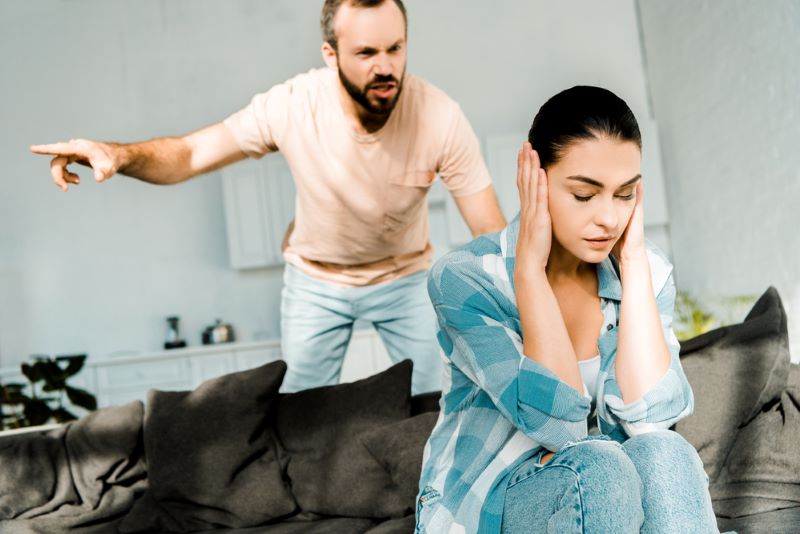 I watched my friend Mariah cringe as her husband leaned out of the bedroom door and yelled at her,

“Damnit! You left the faucet in the bathroom dripping again!! How many times does it take to get it through your head that water costs money?!!”

After he slammed the door she looked at me, clearly embarrassed, and said, “Sorry, my husband yells at me sometimes.”

Mariah and I are newish friends, so I don’t know her husband well. But yelling at anyone like that seemed over-the-top and I said as much.

“I know, I hate it when my husband yells at me. I don’t know how to make him stop though. And really, it’s only when I do something dumb. I think it’s pretty normal for a husband to yell on occasion anyway.”

No, Mariah - and any other wife out there who needs to hear it – it’s not normal or okay for a husband to yell at his wife (or family).

If you’re one of the many wives out there who has ever said, “My husband yells at me,” you need to understand a few things.

Why Does My Husband Yell At Me?

Yelling is a verbally aggressive way of expressing yourself. It occurs most often during times of emotional stress or agitation.

And while yelling isn’t the right way to communicate, it definitely sends a message. Unfortunately, the message it sends has very little to do with the words that are being yelled.

Generally, the message being delivered when someone yells, regardless of the words being used is,

Most of us can relate to yelling in certain situations.

If a child runs into a busy street for instance, yelling makes sense.

But a husband who habitually yells at his wife or family for any minor infraction is a different story and not acceptable.

One of the ways to get the yelling to stop is understanding why it starts in the first place.

For many men who yell there are underlying factors that create the feelings described above. But rather than finding a way to communicate what they feel, these emotions come out through angry behavior like yelling.

Some of the things that lead to this include:

These aren’t the only reasons that can drive a husband to yell at his wife, but they are the most common.

Is It Abuse If He Yells At Me?

Understanding the ‘why’ behind your husband routinely yelling at you can be helpful – but it doesn’t make it okay.

No one wants to be yelled at. It’s hurtful, demeaning, and embarrassing. And contrary to the good communication needed to maintain a healthy relationship.

But is it abusive?

If once or twice a year your husband raises his voice in frustration and then finds a way to calm down, his yelling is probably not abusive.

But if like my friend Mariah, your husband yells often and with very little provocation, he’s crossed the line into abusive behavior.

That line can be blurry. Dr. Kurt routinely helps couples see it more clearly. When asked about it he had these thoughts to share:

A husband yelling about the sloppy job the plumber did is very different from him yelling and calling his wife 'stupid' for overpaying the plumber. Yelling definitely becomes abuse when it's a personal attack, and includes name calling, cursing, or put downs. Some of us are much more comfortable with yelling than others. If you grew up in a house where raised voices were common, but your spouse did not, then yelling can be something you each feel very differently about. It's also very different on the sending end of yelling than on the receiving. Does he lack a filter, or is she too sensitive? Could be either, or maybe a little bit of both."

If you’re unsure of what your husband’s yelling may mean, consider the following questions:

Answering yes to any of these questions, and especially more than one, is a strong indication that your husband’s yelling has become verbal abuse.

How Can I Get Him To Stop Yelling At Me?

Getting your husband to change his behavior and the difficulty in doing so will depend on two things:

So, as you endeavor to stop your husband from yelling at you consider taking the following steps:

As Mariah and I talked more about her situation, her sadness became apparent. No wife should have to say, “My husband yells at me” and accept it as just the way of things.

By the end of our conversation, I felt confident that she knew she deserved to be treated with more respect and was going to begin the work needed to get her husband to change his behavior.

If you can relate to Mariah and have found yourself frustrated by your husband's yelling, keep the following things in mind:

Finding yourself saying, “My husband yells at me” doesn’t mean you have to accept it as a normal and acceptable state of your marriage. Are you in a situation similar to Mariah’s? If so, you need to know you’re not alone, and that there’s hope for change.