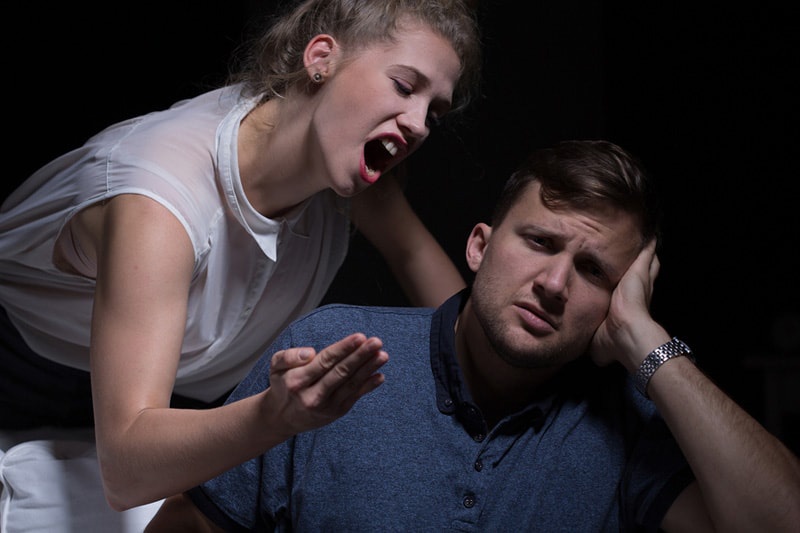 When it comes to abuse in a relationship most people assume that men are the abusers and women the victims. This isn’t always the case, however. Yes, when it comes to physical abuse it’s more often men who are at fault, but emotional abuse can just as easily be perpetrated by a woman as it can a man. In fact, at Guy Stuff we have worked with many men who have confessed that their wife is emotionally abusive.

Read below to see a question from a man who is dealing with an emotionally abusive wife and my response to him.

Recognizing When Your Wife Is Being Abusive

I'm male. Right now I don't know what to do. I think my wife is emotionally abusive. Some days I try to keep my mouth shut. Today I was mentally hurt by her. I was feeling sad. I should have not told her I was sad because all the sudden she screamed at me and told me she wasn't staying at home. Saying how sick of it she is, slamming stuff around. I'm afraid of this behavior. I don't want to be separated from my kids. But I realize my wife emotionally abuses me. I feel like she might be rubbing off on the kids and maybe someday they will be abusive. That is my biggest fear, for my kids." -Ryan V.

Ryan is right to be concerned about how his wife’s behavior is affecting his kids.

Not only is she hurting him, but she’s also teaching their children that screaming and abusive words are “normal” in a relationship. A child’s understanding of what appropriate behavior looks like comes from what they see in the adults around them, especially their parents.

Ryan, you've come to an important realization -- there's a problem in your relationship that needs to be fixed. Too many people in emotionally abusive relationships either never get to that recognition or don't get there fast enough. Congratulations, you've taken the first step towards getting things to change.

What you describe about your wife does sound like emotionally abusive behavior. Some of the signs of emotional abuse are the volatility, anger issues, threats, aggression, blame, and personal attacks by the abuser; then fear and self-blame for the victim. Although there may be things you don't know about that are contributing to why she responded this way, the behavior is still emotionally abusive and wrong.

You're right in being fearful about how your relationship is negatively affecting your kids, because it is regardless of whether you can see it or not. Too often people convince themselves that the kids aren't being impacted because they can't see it. This is a mistake. Children may not understand what is going on, but they can feel the tension, anger, and fear. And then they feel the same.

You need to be concerned for your own well being as well. In addition to worrying about how "she might be rubbing off on the kids," you need to think and be concerned about how she is affecting you too. A characteristic for victims of emotional abuse is not valuing themselves enough.

Common Effects Of An Abusive Wife

Fear is a common feeling in an emotionally abusive relationship also, and unfortunately people can allow it to make them feel trapped and stuck.

You're not alone in feeling uncomfortable and even fearful of the aggression and volatility that comes from someone who's emotionally abusive. Most people probably would be too. There's something odd about the person who's supposed to love you actually hating you that only compounds all of these conflicting feelings.

Not knowing what to do is also very common.

Obviously, deciding to leave is such a big, big decision that it should leave you uncertain about whether or not to do it. But another effect of having a wife who's emotionally abusive is doubting and questioning yourself. Abuse eats away at everyone's self-confidence and ability think clearly.

Please recognize that emotionally abusive behavior, especially by your wife, is a really hard issue to deal with on your own, so get some support from a professional counselor. If your wife is willing, going to couples counseling together would be a great way for you to get the help you need so that you both can feel heard and understood. If she's not, go get help without her.

One of the biggest problems with emotional abuse is that it can be a difficult truth to accept, even for the person being abused. This is particularly true for men who feel that their wife may be emotionally abusing them. Too often it becomes what’s normal in the relationship.

If you’re struggling to determine if your wife is truly emotionally abusive then talk to a professional counselor. Do what Ryan did. Getting the opinion of an objective, trained and experienced counselor can remove the confusion and uncertainty.

Editor's Note: This post was originally published September 25, 2010, it was updated on February 18, 2018, and has been updated again with new information for accuracy and comprehensiveness.