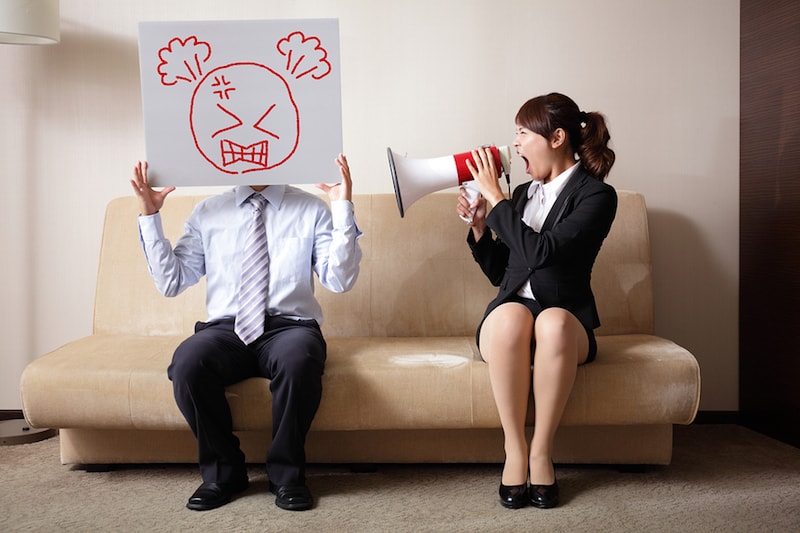 Any guy can periodically have the thought, "My wife hates me." After all, we all do things now and then that upsets our partners.

Our mistakes, or our partner's negative reaction to them, are not unusual or abnormal. However, in most cases the hate is only temporary and often not even really hate as much as just angry, upset, or disappointed.

There is another much smaller group of guys though who almost daily think, "My wife hates me," and have strong reasons to believe this is really true. When she tells you she hates you over and over it's hard not to start to believe it.

If it seems that nearly anything can provoke this response, or if it simply comes out of nowhere and for no apparent reason, it's not hard to believe that her “hate” is real.

This is the case for several guys I am currently counseling. In fact, at any given time there are a handful of guys with marriage problems I'm treating whose wives really do seem to hate them.

I want to know why every time me & my wife argue she tells me how much she hates me cuz I got her pregnant she always bring up my past relationship I had." -Eduardo

It's not surprising that one situation where this feeling often arises is when a man has cheated, and his wife hates him for what he's done to her and their marriage.

Another not so unusual circumstance is when sex or any kind of physical touch is rejected.

Ethan recently told me, "She hates me touching her." For many men this is especially challenging to deal with because sex is a really important part of a relationship for most men.

Sometimes it doesn't even have anything to do with the man.

Terrence was recently told by his wife that "our marriage is over" if he went to a barbecue that his sister was going to be at. His wife hates his sister because of some things in the past and her anger gets directed at him. She hates him though too.

"She says she finds me revolting," he has said to me, and she has told him, "I go to bed to avoid being with you."

Here's another husband who believes his wife hates him:

My wife wants to move out. She says I never let her breathe over the years 16 together. I have been too controlling and never let her be her own person, which I admit fully. I never have been the one for change. I've always thought and been scared of it and have to be pushed. We have a lovely house that was left to me that she says that doesn't feel like her home. It's not hers she says, it's yours, but no matter what I say she thinks the same. She says she doesn't love me anymore. I've chipped away at that. She resents me so much and probably hates me. We haven't been intimate for 6 months." -Grant

If you can relate to Grant you're probably asking yourself...

What Causes Her To Hate Me SO Much?

Okay, so you think, "My wife hates me," but why? Is the problem you or is it her? That's a tough question - it's probably a little bit of both.

Obviously, a guy who's cheated has a lot of responsibility to bear. But in most situations it's a lot most complicated than that.

Most husbands who believe their wives hate them have been told often enough many of the reasons that they've got a pretty good idea as to why. What's often so confusing for them is why hate? Angry, dislike, or not feeling it for you, those are feelings they can much better understand.

An important element is how long this feeling has existed.

It's understandable to have an immediate reaction of very strong dislike toward your partner, and even for it to last for some time, like in the instance of cheating. However, when it goes on and on and on with no end in sight, it becomes a much bigger problem.

My wife says she hates me because she's given up everything she ever had that made her happy to be with me." -Leo

For many men who think their wife hates them the problem is much more complicated than just what they've done wrong to trigger this feeling.

I don't know how to put everything into words. I know that I feel like my wife hates me and refuses to forgive me for anything I have ever done. I stayed with her throughout the pregnancy, delivery, and 8 months after. The hardest thing I ever did was to give up that little girl. A little girl is all I have ever wanted. I really feel terrible that this woman thought so little of me that she felt it was better for the child for me not to be in her life. This decision haunts me to this day. I would honestly love to know that she is doing well and is happy. However my wife has given an ultimatum on the subject. This is one of the reasons she hates everything about me." -Dean

Wrapping your head around the fact that your wife hates you is really hard, even if you can understand some of the reasons. The intensity and consistency of it being vented at you can be so demoralizing.

Often there's no one to talk to who can really understand or even believe it, so still loving your wife but also feeling all alone in your marriage is another outcome that adds to the challenge of all of it.

What Hate Really Means When Your Wife Says It

Let’s start with the fact that “hate” is a really powerful word and rarely used correctly. The strongest likelihood is that your wife doesn’t actually “hate” you at all – at least not totally. What she probably means when she says it is that she’s unhappy, feels undervalued, and resents you.

This may or may not be due to your behavior. Certainly, if you’ve been neglectful, cheated on her, or verbally abusive, you’re likely to be the reason she’s feeling this way.

But it’s also possible that she’s really dissatisfied with her life, the choices she’s made, and is blaming you for them. It’s easier to blame you than to take responsibility for her own misadventures.

It can be hard to really understand the source of your own unhappiness – man or woman – so we look outward rather than inward for the reason.

The result? Lashing out at the person closest to you and saying mean things like, “I hate you.”

So, if you feel like your wife hates you, take a moment to consider these questions:


Understanding more about where her feelings of “hate” are coming from will help you figure out the next step for the both of you.

Hopefully, reading the stories of these other men will be reassuring that you're not the only one thinking, "My wife hates me." It’s possible to change it too. Terrence, for instance, is learning in our counseling how to respond differently to his wife and has seen changes in how she treats him as a result.

Editor's Note: This post was originally published August 3, 2017 and has been updated with new information for accuracy and comprehensiveness.