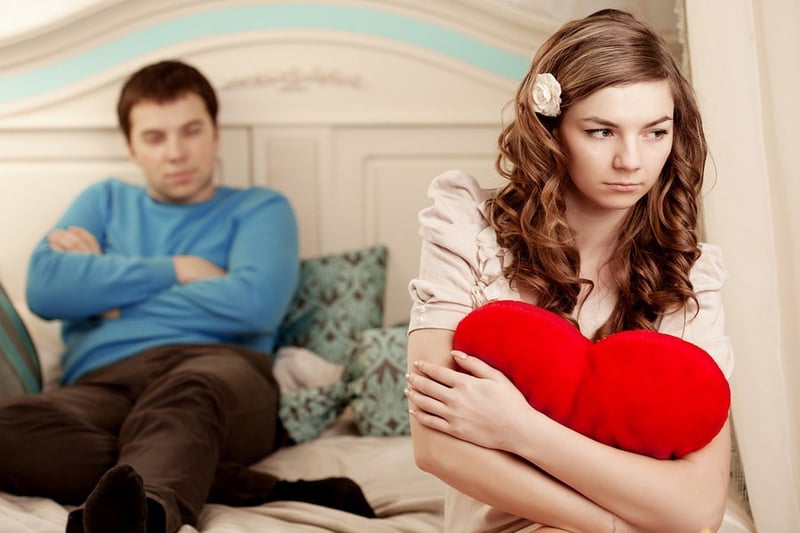 One of the most common complaints I hear from unhappy female partners is some version of, "I love him, but he doesn't love me." While it's not just women who say this, it does seem that more women feel this way than men.

Don't get me wrong, there certainly are plenty of unhappy men. Just read through the comments left on the articles on our Counseling Men Blog to find out. But in my experience more women are going to say, "I love him, but he doesn't love me," than men. A lot of guys are just more willing to distract themselves and put up with feeling this way than are women.

One of the things that trips people up the most in relationships is what their expectations are for love. What love means is different for all of us. While we all use the word love and can pretty universally agree on what we generally mean when we do, the experience of love can be different for each of us.

For example, some men find it loving for their partner to give them space, while others want physical touch (this doesn't have to mean sex) in order to feel loved.

Our expectations for love, a relationship, and our partner play a big, big part in our relationship happiness and success. Here's an example of how expectations affect relationships. This is a submission we received from a confused and devastated wife:

I love my husband, but found out he doesn't love me. My husband recently told me that he wants to end our marriage because he doesn't feel passion. He said that he has never felt passion with me and that he wants to feel it some time in his life. He has mentioned that he doesn't want to be on his deathbed looking back feeling like he never took a chance. I believe him when he says this because I know he is honest, but this has been devastating for me. We have been together for almost 8 years, married for two.

Prior to him dropping this bomb that he doesn't love me, the issue of divorce had come up when I noticed he seemed really down, and I wanted to talk to him because I worried that dealing with my health issues was just too difficult. I think the health issues have intensified his guilt for feeling the way he does. I am 31 and he is 34. We have a loving (though maybe not "passionate") relationship, and have always been honest, faithful, strong communicators, are on the same page financially, are close to each other's families, and we have always wanted the same things (no children, love for travel). The only issue, which is a huge one, is this passion issue.

I feel devastated by the thought of losing him because I love him and our life together so much, and terrified for the prospect of my financial and health future. He doesn't want to try because he feels certain in his feelings, but I feel that, aside from the passion issue, we are so strong and have everything else, and we should work on this. I don't want to repeat to him that passion may be some mythical thing that doesn't last, or will not be easy to find, along with everything else we have. At the same time, I don't want to trap or guilt him into staying, while feeling that I don't deserve someone who isn't passionate about me either. Should I let him go because he doesn't love me, even though I still love him?"-Kristen

What an unfortunate, but good, example of what expectations can do to us. Kristen's husband feels something is missing in their relationship and he's calling it "passion." There's no question that for him it's a real thing that he's longing for, even though she's obviously having a tough time understanding it.

Realistic Or Unrealistic Expectations For Love

Would you say her husband's complaint that their marriage lacks "passion" is a realistic or unrealistic expectation? To be fair, none of us knows what their relationship is truly like, and maybe he could explain what is missing in such a way that we would all agree he's right about "passion" missing and there should be more of it in their relationship.

Every week I counsel men like Kristen's husband who are questioning their relationships. And just like Kristen and her husband, their partner still loves him, but he doesn't love her.

Sometimes they've fallen out of love, other times they never ever really felt fully in love in the first place. A number of people are unhappy because their relationship is dysfunctional, and sometimes people question themselves about the partner they chose - "Did I pick right person for me?"

Regardless of the reasons, a common problem today for both men and women is looking elsewhere for love. Too often they want to leave their current relationship to pursue a relationship 'ideal' they have in their mind that doesn't really exist.

That doesn't mean they won't find someone who will make them feel more in love, happier, or passionate - initially anyway. Those feelings are to be expected in all new relationships, but over time, even with that new person, the passion will change, lessen or fade. It has to because nothing in life stays constant.

What Influences Our Feelings About Love

What we all have to be honest with ourselves about is how much we're influenced today by our perception of the lives others are living. We are so connected to each other through our technology and in ways that allow us to see into the day-to-day lives of others like never before.

The exposure we have into so many other people's lives feeds our temptation to compare our lives. Remember the saying, "The grass is always greener on the other side of the fence"?

Regularly I hear people comment about the love they see others have through connections on Facebook or Instagram, and this can greatly influence situations like Kristen's where her husband feels like he doesn't love her. It used to be that we were influenced by the Hollywood myths of love, but now we're even more influenced by our perceptions of the happiness we believe others have and feel we don't.

We’re also heavily influenced by what we saw growing up. What our parent’s relationship looked like, or the relationships of other important adults in our lives, can play a big role in influencing what we want or don’t want in our own relationship.

I worked with one couple in which the wife had grown up in a household with parents who were very affectionate with one another. She said she always saw them literally kiss and make-up at the end of every argument. This formed her expectation of what a loving relationship looks like.

Her husband, on the other hand, grew up in a home where his parents slept in separate rooms and rarely ever hugged. While he doesn’t want that in his own marriage, he’s also struggling with his wife’s expectation of constant affection and her hurt feelings when it’s not given.

As a result, they both have become unhappy and are seeking marriage counseling for help. She feels rejected and he feels pressured, and neither one knows how to find a middle ground.

Can You Change The Way You Love?

Changing the way you love can be difficult, but changing your understanding of what love means and looks like is definitely possible and necessary for many relationships to survive.

It’s difficult to imagine this ever being needed at the beginning of a relationship, however. As I mentioned above, we all expect excitement and passion when we first get together. Understanding that as your relationship grows what you see as loving and what your partner sees as loving could become very different is the hard part.

I've worked with many guys who've done what Kristen's husband is about to do - blown-up their lives to search for better love - and most end up back in the same place (unhappy). And the reason their efforts fail is because they're looking for an external solution (new partner) to an internal problem (their perceptions and feelings about love).

If you're feeling like this guy, before you make some big, drastic changes, ask some other people if your expectations are appropriate and realistic. Be sure to ask people who aren't biased towards you or against your partner, and who have some experience and wisdom (a relationship counselor would be your best source).

Most importantly, don't make life-changing decisions like this alone. If you're a woman like Kristen saying "I love him, but he doesn't love me," try showing him this article to get a conversation started.

Editor's Note: This post was originally published November 19, 2015 and has been updated with new information for accuracy and comprehensiveness.