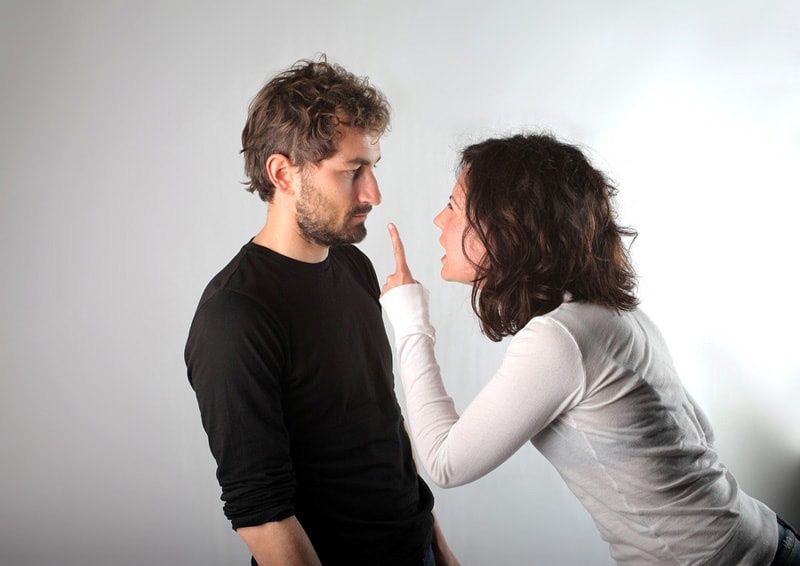 Read the following submission I received from a man named Scott and see what signs of an abusive relationship you can spot in his situation:

Hi my name is Scott. I recently moved in with my fiancée. But I think she can be my common law wife? She has two older kids of her first marriage. 15 year old son and a 19 year old daughter. She has a strong temper. It's very hard to adjust since I never had kids of my own. I am planning to have my first child with her though. Anyway, we both have hurt each other emotionally and sometimes physically. When we fight it's all about insults. I am the one who always apologizes, but she keeps fighting, insults, orders me around. She gets anxiety attacks when she fights. My problem was that I tried to stop her leaving the house. That's when she gets violent and throws things at the floor, uses anything to hit me, injures me. When we don't fight it's great. I want this relationship to work. We just got a new house, I got her a vehicle, some furniture. I have her very spoiled. I can't say no to anything she wants." - Scott

So how many signs of abuse did you find in their relationship?

What The Signs Of An Abusive Relationship Can Look Like

Reading Scott’s submission, I think there are at least 13 signs he’s in an abusive relationship, and potentially even more depending on how hard you look. That may seem like a lot, but actually having that many isn’t that unusual.

Abuse in relationships is typically very subtle and yet complex in the ways it occurs.

Scott is like a lot of people in relationships with abuse, he knows something's not right, but he’s not quite sure what. Many either have no idea they're in an abusive relationship or how bad the abuse really is. It's also important to note that men can be just as likely to be the victim of abuse, like Scott, as they can be to be the abuser.

How Many Signs Does It Take For A Relationship To Be Considered Abusive?

A question I often ask partners in counseling is whether the problem behaviors in their relationship should be considered abuse. Most are surprised that I would ask since they’ve never considered that possibility themselves.

If your husband yells at you once does that make it relationship abuse? No, but yelling at someone is still an abusive behavior – regardless of the provocation, intent, or how infrequently it occurs.

And if your wife called you an idiot and gave you the silent treatment for a few days a year ago, does that mean you’re in an abusive relationship? Not necessarily, but again these behaviors are still forms of abuse.

The problem is that in some relationships once these behaviors emerge, they can multiply and escalate over time. It’s the accumulation of abusive behaviors, their frequency, severity, and effect on the partner that needs to be considered.

One bad day doesn’t need to brand your relationship as an abusive one, BUT one bad day when the behaviors are out-of-bounds and go unaddressed will very often lead to other days with similar behaviors, and it only gets worse as time goes on.

Editor's Note: This post was originally published October 12, 2013 and has been updated with new information for accuracy and comprehensiveness.