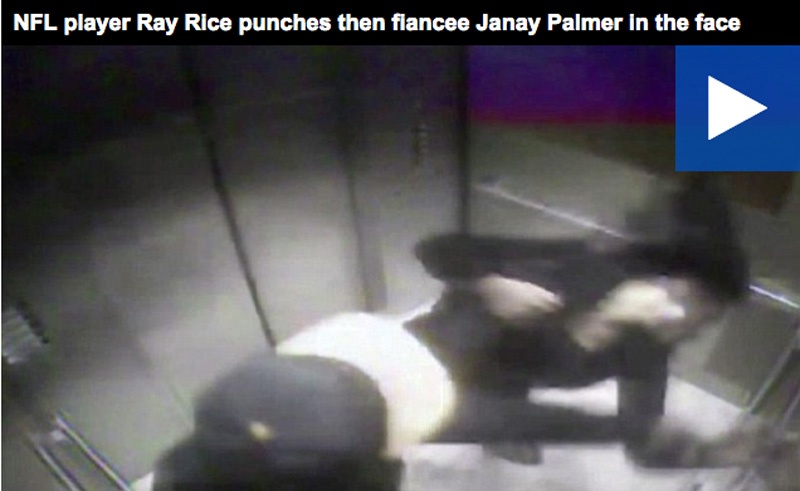 Most people by now have seen the shocking video of NFL player Ray Rice punching and knocking out his then-fiancee (now wife), Janay Palmer, in a casino elevator. For many it was an eye-opening example of what relationship abuse looks like. This truly was a peak behind closed doors, because in most cases of domestic abuse there is no video, no witnesses, and in half the cases, no police report. So are there signs of abusive relationships when there is no tape? Yes.

Much has already been written condemning Ray and Janay rather than understanding them. This article is not meant to further embarrass or judge either one of them, but rather to look at their behavior, just like I would if counseling them, to learn more about where they both have made mistakes, learn why, and what they both can do to become healthier, happier and more loving. In so doing, we can all learn to see the signs of abusive relationships.

We're going to examine the common characteristics that occur in abusive relationships. As we explore them, it's very important to keep in mind that many of these will not make sense to someone thinking clearly and logically. The psychology at work in relationships where abuse occurs is very deep and complex. For those living with abuse, it results in a twisted way of thinking.

The video of this criminal assault has obviously been very embarrassing for both Janay and Ray, but it's also done something very positive. It's broken the secrecy of abuse for many abuse victims, including Janay.

The National Domestic Violence Hotline has seen an 84 percent increase in phone calls in the two days since a video leaked of former NFL player Ray Rice knocking his then-fiancee unconscious in an elevator:

We had an outpouring of women saying, 'Oh my god, I didn't realize this happened to other people.' They thought they were living a life that was very unique to them,"- Katie Ray-Jones, the CEO of the hotline.

And the secrecy surrounding abusive relationships needs to be broken because, according to the CDC, shockingly one in four women will be abused by their partner in their lifetime, says Tania Tetlow, a law professor and director of the Domestic Violence Clinic at Tulane University.

If you're in an abusive relationship (victim or offender), breaking the silence is the most important thing you need to do to stop the cycle of abuse. Please push past the shame and tell someone.

Another sign that you're in an abusive relationship is that you protect the one who hurts you. Rather than hold the abuser accountable for their wrong actions, victims typically put the responsibility on themselves. That was on public display with the Rice's:

The couple's denial was on vivid display last spring, when they appeared at a disastrous news conference organized by the Ravens. Ray Rice apologized to everyone but his wife. Janay Rice said she deeply regretted the "role that I played in the incident that night." Unwittingly, she did a terrible disservice to battered women everywhere. But her greatest disservice was to herself.

Regardless of what led up to the elevator assault, no one deserves to be punched out cold. Janay most likely did contribute to the conflict between the couple that night, but that does not change the fact that Ray had no right to hit her. If you've been hit or are being abused, nothing you've done justifies that behavior either. Wrong is wrong. Period.

I was counseling a couple this week that had just had a domestic violence event themselves, and the wife did the exact same thing, stating, "I panicked and called 911. He's really a teddy bear and I know he'd never hurt me." Her "teddy bear" ripped a chair out from under her while she was sitting on it with their toddler on her lap.

Janay showed another common abuse victim response in her defense of Ray. This can be seen in many of her responses, but most notably in her social media posts following the release of the elevator tape.

"Just know we will continue to grow & show the world what real love is," she posted on her Instagram account. "To take something away from the man I love that he has worked" for all his life is "horrific," she said.

Victims frequently defend and stay with their abusers. They do this because they are human and it's very difficult to accept that someone you love has this capacity for cruelty. An abuser often isolates his victim from friends and family, making her emotionally dependent on him. By the time a man is beating a woman, he has gained some assurance that she will not leave him for it.

The characteristics of abusive relationships are very complex. But memoirist Leslie Morgan Steiner, a survivor of domestic violence and now an activist, simplified it very well when she wrote at CNN last year that domestic violence victims "want the abuse to end" but they "don't want the relationship to end."

In addition to how the abuse warps the victims thinking, another powerful influence in why victims don't leave is dependence. It's easy to think of solely financial dependence, and that's most often the case. In fact, domestic violence experts say economic reliance is a leading predictor of whether a woman will leave her abuser. But dependence can also take the form of mental and emotional. For example, being overly dependent upon getting the abusers love -- "I know he really loves me."

"It's incredibly difficult to extricate yourself when you're financially dependent," Jacquelyn Campbell, a professor of nursing at Johns Hopkins, said in an interview.

Testifying against Mr. Rice would have meant ending his football career, embarrassing the team and possibly sending her daughter's father to jail. Instead, Janay Palmer married him the day after the indictment.

"Many times a victim becomes so dependent on her partner for everything that she can't even entertain a reality without him in it," Ramani Durvasula, a psychology professor at California State University, Los Angeles, said in an interview.

"No one really likes to think of themselves as a victim, in the same way that nobody likes to think of themselves as an abuser," Parker said. "It almost becomes empowering for the victim to say, 'It's not that bad, this is my life, this is how I've chosen to handle the situation.' The couple is a united front against the world, and it makes them both feel more cocooned."

If you're in an abusive relationship one of the best things you can do to make the abuse stop is to take steps to lessen your dependence. For some people this means getting a job, for others it's going back to school to learn a new skill to become more employable, and for others it means going to counseling to learn how to change your dependent way of thinking, such as "I can't live without him."

Believe It Will Change

As we can see from the above examples of the victim protecting and defending the abuser, there's a denial of reality required to do these. Another form of denial can be seen in the way abusive relationship victims tell themselves things will change. Below are examples of how beliefs in the power of love, that they can change their partner, or that it won't happen again contributes to why abuse victims don't leave.

That's why hundreds of survivors flooded Twitter this week with the #WhyIStayed hashtag, explaining how easy it is to fall into the trap of defending the relationship instead of getting out.

Beverly Gooden, a human resources manager in North Carolina, logged on to Twitter to explain. "I tried to leave the house once after an abusive episode, and he blocked me," she wrote about her ex-partner, adding the hashtag #whyistayed. "I thought that love would conquer all," she added in a subsequent message.

"I believed I was the only one that could love him and heal him," read one post from Chicago.

"You tell yourself, maybe the last time was *the* last time," said another from South Africa.

It's possible to be hopeful for change, and to be looking for it, while also facing the reality that it's not happening and that's the reality you live in and is what you have to deal with.

He Takes No Responsibility

As was noted earlier, Ray Rice apologized to everyone in that spring new conference -- but Janay. This is very typical behavior of an abusive partner or husband. Until abusers really begin to change they will appear to show remorse and take responsibility, but they actually don't really do it.

And Mike Freeman of Bleacher Report reported that Rice was blaming his wife to his fellow players, quoting an anonymous Ravens player as saying that "Rice told teammates that he had no choice but to defend himself that day in the elevator."

It's also important to note that although we typically associate abusive relationships with men abusing women, it can just as easily be women abusing men. While men do the majority of physical abuse, women use mental, emotional and verbal abuse methods. I work with a lot of men who demonstrate the same signs of abusive relationships as Janay Rice -- they protect, defend, are dependent upon (most often emotionally), and believe it will change, too.

Relationship abuse occurs to both women and men, rich and poor, highly educated and those with little schooling -- abuse knows no boundaries. And sadly, of all the signs of abusive relationships, the most common one of all is 'stand by your man' (or woman).