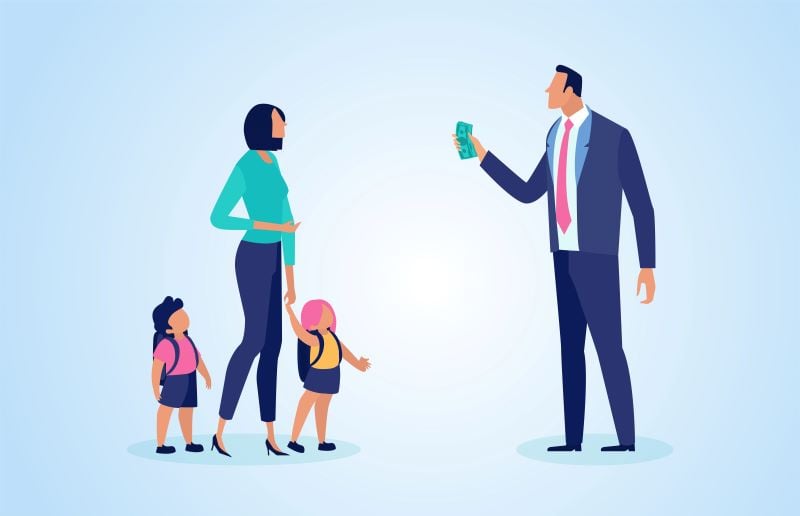 When we think about abuse our minds usually go right to physical or emotional. Most of us don’t ever really think about financial abuse in a relationship and what it can look like.

It even sounds strange, right? Financial abuse – how can you be abused financially in your relationship? The truth is that financial abuse is not only very real, it’s also very common.

"I’d leave if I could, but I don’t have any money”

Do any of these statements sound familiar? If they do, you are likely dealing with financial abuse in your relationship.

What Is Financial Abuse?

In many ways financial abuse is the most insidious and powerful forms of abuse. It traps a person and keeps them dependent on the someone else without being overt or physically damaging. Because financial abuse can keep you trapped, however, it also can make you an easy target for other forms of abuse as well. Studies show that not only is financial abuse common, but it’s almost always a factor in emotional and physical abuse cases as well.

Like all other forms of abuse, financial abuse is about control. In this case, however, the control is exercised through access to money or resources. A person may be prevented from working and having their own money or kept out important financial decisions and not allowed to have anything in their own name. Thus, the abuser is able to control virtually all aspects of the victim’s daily life since very little happens – think transportation, schools, food, clothing - without a dollar value attached to it.

Although financial abuse can be perpetrated by both men and women, its overwhelmingly women who are the victims of this particular form of abuse.

By controlling access to resources an abuser places the victim – often a mother and her children – in the position of having to choose between the livelihood of herself and family or breaking free from her abuser. In some cases, a particularly manipulative abuser may actually leverage access to children if the victim threatens to leave. After all, the person who controls the money typically has the ability to provide, whereas someone being held back often has nothing and no ready ability to financially care for the children. It’s not surprising that many women in these circumstances often choose to live with the abuse instead of making changes.

Financial abuse can take other forms as well, however. Dr. Kurt works with many couples for whom finances create problems. According to him,

Controlling the finances is the most obvious form of financial abuse. I'd argue, however, that deception around finances, such as not disclosing spending, having secret credit cards, or making bigger purchase decisions without discussing first, as well as the willful refusal to establish and follow a budget, are other forms of abuse as well. And women just as much as men can be guilty of these actions. Sadly, finances is a common area where partners don't practice loving and respecting each as well as they could."

Signs You Are Being Abused Financially

So, how do you know if you’re being financially abused? Does it mean that any partner who handles the finances in the relationship or is the money earner is abusive? No, of course not.

It’s actually very common in a relationship to divide duties, one of which is often managing the money. How this is structured depends on each partner’s comfort level, skillsets, and requires respectful agreement. In a healthy relationship, which should be every couple’s goal, finances are transparent and shared, with each partner being aware of and involved in the major decisions.

In a relationship where there is financial abuse things are quite different. Take a look and see if any of these circumstances are similar to yours.

These are not all the ways that financial abuse can manifest in a relationship, but they are some of the most common. Determining if any (or several) of these describe you can help you know if you may be suffering financial abuse in your relationship.

Because it can be so much less obvious than emotional or verbal abuse, it’s crucial to be aware of the signs.

The Effects Of Financial Abuse

Financial abuse in a relationship isn’t often talked about, particularly in terms of it being wrong. In fact, in many relationships these behaviors are mistaken for normal. It’s not unusual for a victim to become so accustomed to any kind of abuse that they can no longer see that there’s something wrong, but in the case of financial abuse there is a lot that goes overlooked by all, even loved ones, and the results can be devastating.

Many of us have heard of being a “kept woman” or “kept man,” implying that because one partner pays for everything and controls the finances, they “keep” or “own” the other. The imbalance of financial control can create an environment in the relationship where one person feels they have the freedom to do whatever, whenever, and with whomever they choose, potentially having affairs or acting in other inappropriate ways.

The partner with no financial say doesn’t have this privilege and is reduced to being “okay” with everything because leaving isn’t seen as an option, meaning their partner’s take it or leave it approach really means just take it.

Being a victim of financial abuse can cause severe psychological and emotional stress and leave long-lasting scars even once the abuse has stopped or they’ve left the relationship. Although, because financial abuse in a relationship can be so crippling to independence or seeing any options at all, many partners find it immensely difficult to even consider leaving.

Dr. Kurt has counseled couples and individuals dealing with financial abuse in their relationship. Most don’t even recognize what’s happening and attribute their problems to something else. In his experience,

Rarely do couples come to counseling because of money problems. And it's not because they don't have them, it's because they don't see them as problems. Even in relationships where financial abuse is clearly happening, partners typically see it more as a communication or love problem rather than abuse. Unfortunately, there's a general belief that conflict between partners around money is to be expected and okay. However, I find how couples handle their finances to be one of the best indicators of the health of their relationship. And one of the biggest consequences of not doing this well is the damage it causes to the level of trust and closeness partners experience."

Those dealing with financial abuse can struggle greatly when trying to regain their lives, independence, and create financial stability. Not only may they have what’s effectively PTSD from the emotional abuse that generally goes hand-in-hand with financial abuse, but they will also suffer with self-esteem, self-confidence, and have a steep learning curve as they become self-sufficient.

Finding a way to support yourself and potentially your children can mean relearning – or possibly learning for the first time – how to manage money and create financial stability. Not to mention practical necessities like getting a bank account and establishing credit.

Can You Recover From Financial Abuse?

The short answer to that question is, yes. You can indeed recover from being in a financially abusive relationship. It will take time, however, and almost certainly assistance.

The best-case scenario is that as a couple you seek counseling to learn how to effectively work together in recovering from this unhealthy situation. The worst-case scenario may mean that you break free from the relationship and seek counseling independently and support from those who care about you as you re-establish yourself. There are also resources available in most communities to help victims regain their independence.

If there is financial abuse in your relationship it will take an active effort for change to occur. Financially abusive relationships don’t just get better as time goes on, in fact they’re much more likely to get worse. That alone is good reason to start making changes now if you suspect that’s what you’re dealing with. The more quickly you act the more quickly you are to get to a healthy place in your relationship, or perhaps on your own if that’s where things take you.