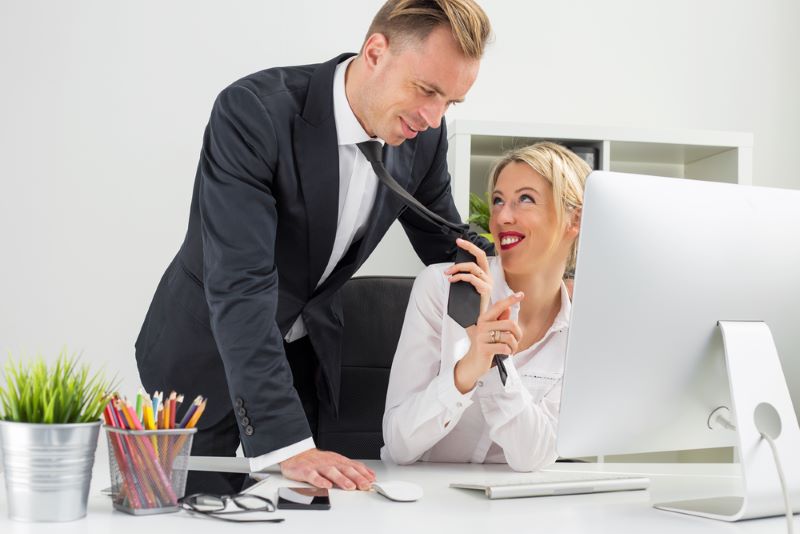 Do you think you’ve seen signs your husband is cheating with a coworker? If you do, you’re not alone.

For many, the majority of our adult lives are spent at work. That means most of our time during those years is spent with co-workers. So, it’s not a huge surprise that when affairs happen it’s often between people who work together.

Feeling like your husband is cheating with a coworker is a common problem. In fact, the term work-wife or work-husband is often used when referring to certain people that play a big role in a partner’s daily life.

But spending a lot of time together at work doesn’t automatically mean cheating will occur. Before you start hurtling accusations, you need to be sure that what you’re seeing are truly signs your husband is cheating with a coworker.

Why Affairs At Work Happen

It might seem simple – they work long hours together, get close, and have a lot in common. Before too long a small kernel of attraction + opportunity = cheating.

Thinking of an affair with a coworker in these terms can make it more palatable for some. It doesn’t feel as personal. In short,

It just happened and it doesn’t mean anything.”

Occasionally it might be that simple, but most often affairs have more to do with the relationship at home than with the “other woman,” or even the ease and opportunity.

With very little exception, cheating is a symptom of problems in the marriage rather than the problem itself.

No, this doesn’t mean you drove him to it, or that it’s your fault. In a marriage responsibility for problems falls on the shoulders of both partners, not just one. And cheating is a choice, not an inescapable outcome.

So, if your husband is cheating with a coworker it’s likely there are problems making your relationship vulnerable.

Some of the most common culprits that can lead to instability in a marriage are,

So, before you start assuming your husband is cheating with a coworker, consider the state of your marriage and ask yourself,

The answers to these questions can help you put things into perspective. Remember, unfounded accusations do their own damage.

Signs Your Husband Might Be Cheating With A Coworker

If after reflecting you’re still questioning whether your husband’s been faithful, take a deep breath and consider whether there are any clear signs that he’s cheating with a coworker.

Some of the most common and clearest signs of cheating, especially with a coworker, include:

Keep in mind that seeing one or two of these signs does not mean he’s cheating with a coworker. Nearly all of these can occur organically for reasons that have nothing to do with cheating.

However, if you’re seeing a few of these behaviors creep in and you know your relationship isn’t as solid as it should be, it’s conceivable that your husband may be having an affair with someone at work.

What Kind Of Affair Is He Having With His Coworker?

The next consideration is what kind of affair might he be having – emotional or physical.

Often affairs with coworkers start emotional and never become physical. This doesn’t really make it better, although some men (and women) will justify things by saying,

I never slept with her/him, so it wasn’t really cheating.”

Dr. Kurt works weekly with couples affected by cheating. Many of these are dealing with affairs that began at work. When asked about it, he had this to say:

Affairs are always complicated and tricky. And when your husband cheats with a coworker this is especially true. The clear lines of right and wrong can be fuzzy when it hasn't gotten physical. The 'if you ever cheat on me I'm done' declaration is much harder to act on when it's happening to you. The expectation that he 'just end it' isn't always so easy either. I've worked with couples where he still had to interact with her every day as part of his job. And most people also can't just quit their jobs. So, dealing with your husband cheating with a coworker is tough, but it can be done. It's best to get some experienced help though, as the recovery path is a really hard one to navigate successfully on your own."

An emotional affair is as damaging – maybe more damaging – than a physical affair.

And emotional affairs can sneak up on people who feel like they’re just developing a friendship and cultivating their work relationship.

with someone who’s not your spouse is how an emotional affair starts and it’s still cheating – even of there’s no physical contact.

Dos And Don’ts If You Think Your Husband Is Cheating With A Coworker?

Once you've done these things you're in a better position to do the most important thing:

Even if he’s not cheating, the fact that you’re concerned about the possibility means this conversation is long overdue.

If He’s Cheating With A Coworker Should You Ask Him To Quit His Job?

If the signs your husband is cheating on you with a coworker are correct and he is, you’ll likely feel the impulse to demand he quit his job.

This is a normal feeling.

Wanting him as far away from the person who’s interfered with your marriage is understandable. But leaving a job is complicated.

Not only might his job be a primary portion of your financial livelihoods, but it can also be a very large part of his identity.

If your husband has studied for years, or worked diligently to get to his current position, asking him to give it up because he had an affair with a coworker could be too much.

Instead of demanding he quit, you’re better off (as is he given the complicated HR landscape today) ensuring he and the person with whom he cheated no longer work around each other, and are keeping clear and firm boundaries. What that looks like though depends entirely upon the industry he’s in and job he holds.

If you believe you’ve seen signs your husband is cheating with a coworker it can be easy to jump to conclusions. Instead, keep these things in mind:

If he’s cheating on you with a coworker, make plans to begin marriage counseling immediately – with or without him.

Remember as well that signs your husband is cheating with a coworker can also have reasonable explanations.