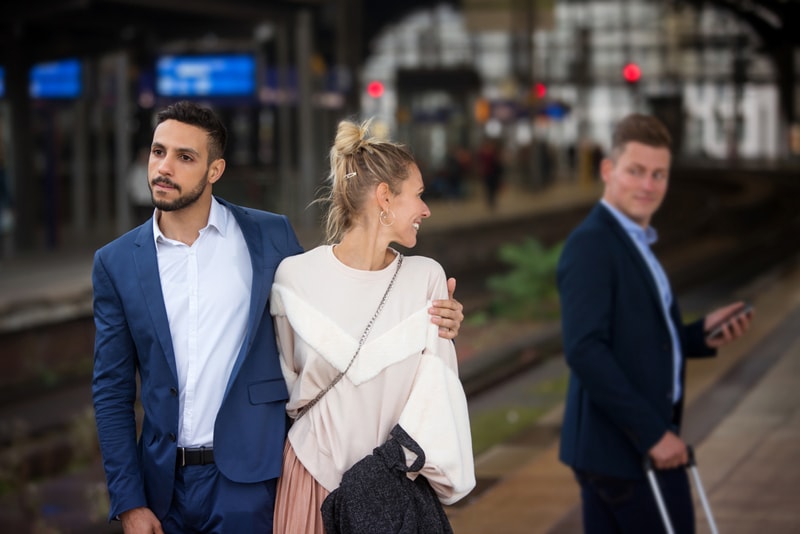 When it comes to cheating on your partner we don’t typically think of there being any grey area. You either did, or you didn’t. But is it possible to cheat just a little bit? As it turns out, yes. Micro-cheating is defined by those little behaviors that may make many of us raise an eyebrow, or feel uncomfortable in a way we can’t really pin down. So how do you recognize the signs of micro-cheating?

Unfortunately, that is one of the biggest problems. These subtle actions undermine a relationship and create problems that are hard to define often until it’s too late. Seeing the signs of micro-cheating can be hard to do unless you know what to look for. Read on to see if any of these seem familiar.

Before we talk about what micro-cheating looks like, let’s first make sure we understand what it is. While many don’t think there is a grey area when it comes to cheating, there actually can be. That’s where micro-cheating comes in.

Infidelity is often comprised of a series of small (micro) behaviors that by themselves don’t seem like much. These behaviors, however, like being overly complimentary toward someone else or misrepresenting your current relationship status, create instability in a relationship. Over the long-term these things can lead to larger, more overt behaviors like starting an emotional or physical affair.

These seemingly insignificant actions can easily be overlooked and explained away. In fact, although they may make one partner uncomfortable, that same partner may say, “No, I don’t like it but he/she isn’t cheating on me.” So micro-cheating defined is all those small things that might make you angry, but by themselves aren’t quite enough to make you end the relationship.

Dr. Kurt frequently counsels couples dealing with these issues. They may be dealing with trust issues and often micro-cheating has played a role. When asked about it Dr. Kurt had this to say,

Isn't cheating just cheating? Not anymore. The lines between right and wrong have gotten so blurred and self-defined that there's now a sub-form of cheating called micro-cheating to identify behavior that can easily be overlooked today. Depending on where you fall in assessing your own behavior you're likely to have a different response to the following list of examples of micro-cheating. If you do any of the things listed you likely will say you're 'just being friendly' or 'having fun' and have no intention to cheat. If you're that persons partner you very well may feel hurt, angry, betrayed and less trusting because of these behaviors. Bridging this difference in perspectives and feelings can be really difficult, but it must be done for the relationship to be healthy and last."

Micro-cheating can range from simple comments, to subtle innuendo, to secretive behavior. It may even occur when the other partner is present or nearby. And rather than the sledge-hammer effect of having an affair, micro-cheating will slowly chip away at the relationship by creating distance and distrust. Below are some of the most common ways that people micro-cheat.

Any of the behaviors above can be signs of micro-cheating. Some may even seem like they don’t really cross the line - I mean what’s really wrong with helping someone who has problems, or having a best friend of the opposite sex? The problem with these things is how they affect your relationship and why they are happening in the first place.

What Should You Do About Micro-Cheating

The answer to that depends upon a couple of things. Micro-cheating, as mentioned, is an odd grey area of relationship infidelity. While some of the behaviors are clearly out of bounds (taking off your wedding ring and pretending you’re not married – not okay), others might seem more like an uncomfortable eye-brow raiser.

If you recognize any of these actions in yourself or your partner you might want to consider the why behind the cheating behavior. Micro-cheating by seeking attention and validation outside your relationship could be a sign of narcissism, or it could be a sign of relationship neglect. Regardless as to the reason, there is one basic question that needs to be answered if you think you might be seeing signs of micro-cheating. How could it be affecting your relationship?

If you or your partner is being secretive about your activities, or doing things that make the other uncomfortable, you are undermining your relationship. These behaviors are signs of micro-cheating and need to be stopped in order to keep your relationship healthy. Because they can seem like minor indiscretions as they are happening, effective communication is crucial to make sure your feelings about the behavior are clear. Timing is important as well so that you are communicating while the behavior is happening rather than after a pattern has been established. While micro-cheating doesn’t initially feel on the same level as sleeping with someone, over time it can have the same outcome – the end of the relationship.