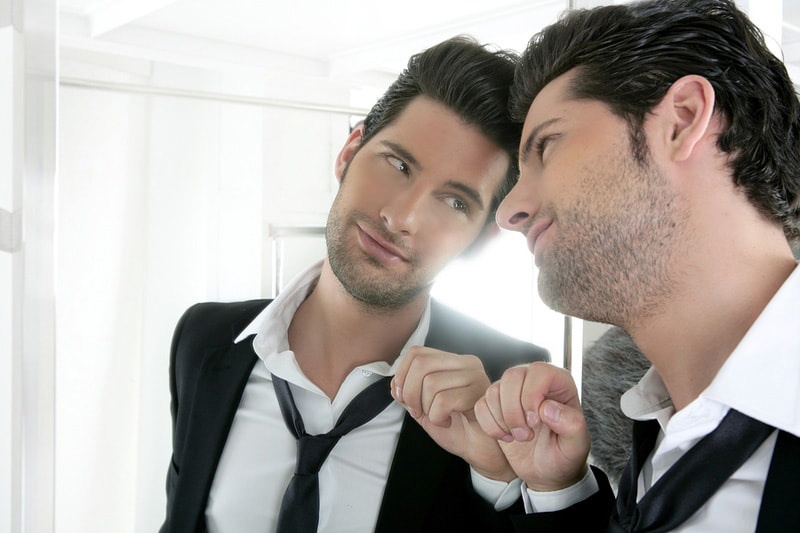 It is becoming pretty common to hear people use the negative label of narcissist to describe an ever-increasing number of people - from Millennials, to presidential candidates, or an annoying boss. And more and more people are thinking that they're in a relationship with a narcissist too.

At Guy Stuff we hear from thousands of people every day who are trying to understand what's wrong with their partner. Why do they do what they do? Why do they treat me (the person they say they love) the way they do? One explanation that we regularly hear is, "He is a narcissist."

Could the explanation to your relationship problems truly be that you're in a relationship with a narcissist? Possibly.

Married To A Narcissist?

Here's an example of a wife who blames her husband's behavior on his being a narcissist:

My husband has been texting a woman who was a girlfriend from long ago. I found this out by snooping but he insists that she is just a friend. I have seen messages that say "I Love You" so I know he is lying about her being just a friend. He also sends money to women on line but denies this too. I have seen the Western Union receipts. He lies about many things and I believe he is a narcissist and pathological liar. He is totally disrespectful and will never admit that he is doing anything wrong, according to him everything is always my fault. I know he will never change because I have tried to talk to him but he just denies everything and tells me I am crazy. I am unhappy and depressed because we have been together for 25 years and I am afraid at the thought of starting over. Can you suggest something that would help me to not be afraid of leaving him. I really don't want to keep letting him disrespect me." -Rhonda

Despite Rhonda's belief that she is in a relationship with a narcissist, she likely is not. Are her husband's behaviors selfish? For sure. Is his cheating and lying wrong? Yes. Is not admitting doing anything wrong and blaming her signs of narcissism? Maybe. However, it's not just narcissists who seek attention, lie about their behavior, and don't take any responsibility.

True narcissism that meets the criteria for a mental disorder diagnosis is rare. A large national study found 6.2% of the subjects they surveyed qualified for Narcissistic Personality Disorder at some point in their lifetime, with the occurrence in men almost double that of women (Stinson et al., 2008). Some of the key features of this disorder are grandiosity, need for admiration and attention-seeking, entitlement, arrogance, and lack of empathy. However, having some of these characteristics, as Rhonda's husband appears to have, doesn't necessarily make someone a narcissist.

"A personality disorder is a pervasive disturbance in a person's ability to manage his or her emotions, hold onto a stable sense of self and identity, and maintain healthy relationships in work, friendship, and love," says psychologist Craig Malkin. "It's a matter of rigidity." A couple of key words to note are "pervasive," "sense of self," and "rigidity." Despite their portrayal, narcissists have a self-identity that is poor, fragile, and externally based, which makes their happiness and confidence highly dependent upon external validation from the relationships in their life. "They have this constant need to have their greatness verified by the world around them," says Seth Rosenthal about real narcissists.

Being in a relationship with a narcissist is complicated. Despite the frequent casual use of the term to describe people, identifying a true narcissist is difficult and often can only be accurately determined by a psychological professional. Human behavior is hard to understand, and driven by a number of interrelated factors. In most situations, the factors influencing behavior, such as Rhonda's husband above, are much more than just narcissism.

I recently started to see a counselor regarding relationship issues with my boyfriend. I've struggled with co-dependency for a long time, and since I have been reading a lot about co-dependency lately, I've come across a lot of articles about relationships with narcissists. I really feel like everything I read fits my boyfriend. And everything I read says run. I'm just wondering if narcissists are ever really able to love.... someone other than themselves even though they don't really like themselves. I know my bf cares about me, but he has never told me he loves me. We have been together about 4 years. I recently found the courage to ask to meet his family since he never has taken me home to meet them (they live out of state), but he doesn't want to introduce me. I feel horrible about this situation - that the reason he doesn't want me to meet them is he doesn't see a future with me. And lately with all I have been reading, I feel like he'll never be able to love me or want me fully in his life. As we were talking last week about things, in response to a question I asked, he told me he isn't in love with me. I asked if he thought one day he might be when after 4 years and he's not, he said yes, he's seen it happen in movies. I'm so confused. I think I know the answer in my head, but my heart doesn't want to accept it. I love him, but I want to be with someone who loves me back." -Ava

Is Ava in a relationship with a narcissist? It doesn't sound like it based on the limited info she's shared. So why won't her boyfriend tell her he loves her or introduce her to his family? I'm not sure, but I've worked with plenty of men who've acted the same way and weren't narcissists. Some questioned whether they were really in love, others were shy about expressing love or making a commitment, and still others were very self-focused and not good at being loving towards a partner. Narcissism goes much, much deeper than these characteristics.

It's not just narcissists who struggle with being loving. Regular guys do too. Whether it's cheating and lying about it, not admitting mistakes and blaming others, or never saying 'I love you' or acting like it. Most people are not in a relationship with a narcissist, even though it may seem like it some of the time. Bad behavior is bad behavior, but most of the time it's not happening because you're with a narcissist.