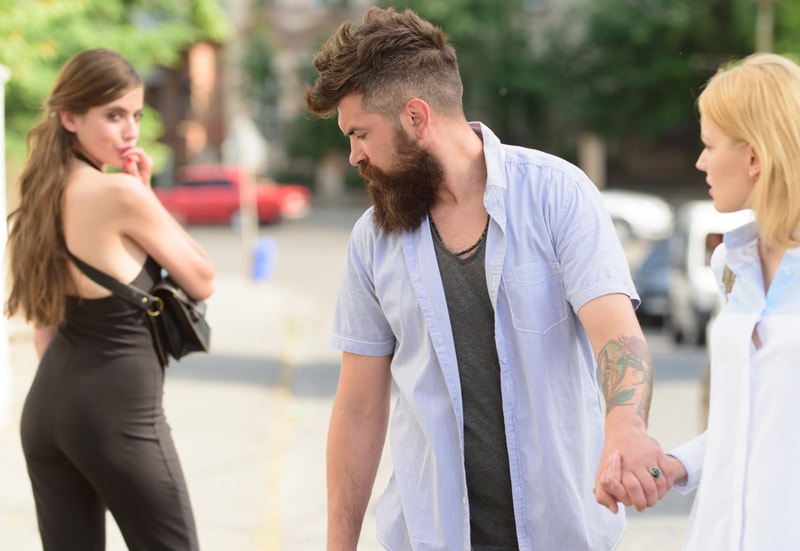 Most of us have heard the phrase dirty old man and likely have a mental image that comes to mind when we hear it. Something like an older, never married, lonely man who acts "creepy" around women, in particular by staring at or flirting with them, especially younger women.

Actually, a lot of guys can act like this. So do you really have to be an old guy to be called a dirty old man? Nope. Age really has nothing to do with it. This derogatory label has become a catchall phrase for any man's inappropriate sexual behavior (or what a woman may view as not okay).

With the rise of the #MeToo movement in 2017 this term has taken on new meaning and encompasses much more than it used to in referring to actions that are inappropriate and disrespectful. Criminal sexual assault by men such as Harvey Weinstein and Bill Cosby has now been associated with it. Along with what has been termed sexual misconduct by other high profile men like Matt Lauer, Al Franken, or Charlie Rose.

What Is A Dirty Old Man?

The label dirty old man is a stereotype and generally describes a man, not necessarily old, who stares, gawks, or ogles women. This behavior can occur in public places like a store, as well as in private in forms such as watching porn on the internet or adult films On Demand. It's sexual behavior that because of a man's age seems inappropriate. While societally we expect younger men, particularly those in their teens and 20s, to have such overt sexual behavior, we assume an older man will have either grown out of that or learned how to show more restraint.

We all know how this feels and believe me, we women, who are ladies do not like it when men act like dirty old men and do this to us, most especially when they are with their mate. I have given disapproving looks, went up to the lady and told her she deserves better and even told one man that he should have more respect for the lady he is with and if he loves her, he wouldn't hurt her with the stares at other women." -Angelina

All heterosexual men notice and can be drawn to attractive women. This is true whether they'll admit it or not. How they go about doing it ,or manage the temptations to do so, is often what keeps them out of the filthy old man dog house with women like Angelina.

While dirty old man used to be a societal description for older men who ogle younger women in public or had a collection of Playboy magazines, it can now be used to refer to anything from sexual assault on down. However, most typically the phrase is used by women to disparage a man, usually their partner, who's behavior they don't like. Another common negative label that can be similarly used is "pervert." Regularly I get asked by women if there man is a "sex addict" because he looks at pornography, and what's really being implied by the question is if he's some kind of deviant or is abnormal. Ultimately, it's the user of this label who puts the definition on it that they want.

A man who talks about sex frequently, makes sexually suggestive comments, or appears to always want to have sex can also be labeled a dirty old man. In the workplace this is considered sexual harassment. When it's done on personal time, or with a wife or girlfriend, it's easy to use one of these more derogatory terms.

There's nothing new here, but men are visually stimulated, particularly sexually. At puberty, and sometimes earlier, boys learn that looking at women is enjoyable. The pleasure chemicals released in their brains reward this behavior and it quickly becomes a habit. As adults most men (even older ones) still notice attractive women, but either manage their desire to look or are subtle about it. Yet there are other men who seem to have their head on a swivel and will make their looking obvious to everyone around them.

Any man is capable of acting like a dirty old man, yet most don't most of the time. The difference is in noticing versus checking out or staring. There are those men who will adjust their behavior in order to get more of a look, such as turning around and following a woman, or changing their routine so they can cross paths again. Some men are just not aware of the habit they've developed. Since it's something they've done almost their whole life it's become an unconscious response.

The love of my life, fairy tale style, is causing me some concern. What he does is uses a controlled substance of the stimulate variety, binge style, and the entire time he is high he has multiple pornographic movies going on one screen and masterbates for HOURS. I'm talking double digits in hours. The longest he was in front of porn it was at least 14 hours. So what is going on with him? I can't imagine why it is attractive to do a drug only to act like a dirty old man ALONE FOR HOURS AND HOURS. Other than that, our relationship has no complaints. So, what is going on? Our sex life has declined greatly, as well. This is the only complaint I have with our relationship, and it is pretty big. But he is not secretive at all about his filthy old man behavior." -Jasmin

Learning how to act around women in a respectful way, especially if you're attracted to someone is something that many men (myself included) were never taught by our fathers or other male role models. There are a few men who don't care how their behavior negatively affects their partner or other women, but most men do. They may laugh it off and deny it at first, but this is more of a defensive response to alleviate guilt so they can continue to do what they enjoy, more so than a genuine desire to hurt the ones they love.

How Do I Stop My Husband From Acting Like A Dirty Old Man?

If you want to someone to do something, like stop acting like a dirty old man, the first thing you have to do is approach them in a more positive way. Most of us don't want to be labeled, certainly not in a negative manner, and so using this phrase to describe him is a conversation and behavior change killer.

Regrettably, these derogatory labels get used in the heat of the moment many times and are usually an emotional reaction to feeling hurt, anger or disgust (likely all three). They also can come from a lack of a true understanding by women of why men do what they do. As we've already discussed, these terms can refer to a wide range of behavior, anything from sexually assaulting a woman to simply noticing how attractive she's dressed.

I have been with my husband for nearly 30 years. I started looking through his phone every chance I got! I found that he was into teen porn!!! This is a man that ALWAYS found this repulsive and said so to anyone that would listen!!!! He said this is normal behaviour. Everything he looks at is legal, he says and the girls like it!! Who in their right mind could believe that?!? He wakes up every morning and watches this before going to work and every spare minute he has during the day!! He looks up things like: "my daughter's friends" ... I am now a loner that doesn't want my daughters OR their friends to come over!! I think my husband is a dirty old pig of a man and he is an embarrassment to me! ...I loved this man with all my heart right up to this started 3 years ago!! Now, he scares me to the very core!!" -Katherine

Katherine and her husband are a good example of the conflict that can arise and derogatory descriptions that can be used around sexual behavior that partners disagree about. Her husband justifies what he's doing and she demeans him. The more he defends and justifies, the more angry and demeaning she gets, and vice versa. Not surprisingly, this approach doesn't lead to anything changing.

It's hard being a man today and having sexually stimulating images, descriptions and people come at you all day long. There's a bit of a catch-22 for men in that women want to be noticed and seen as attractive. After all, the U.S. has an 84 billion dollar beauty industry (2016 revenue) for a reason. And men like looking, but 'over' looking is wrong.

Sadly, the phrase dirty old man is most often used to embarrass and shame a man with the hope that this will change his behavior. It's a hurtful label that is used to hurt because the user is most often hurt. However, while it works to hurt, it rarely works to change.

What are your thoughts on dirty old men - both the behavior and the label? Please share a comment below.