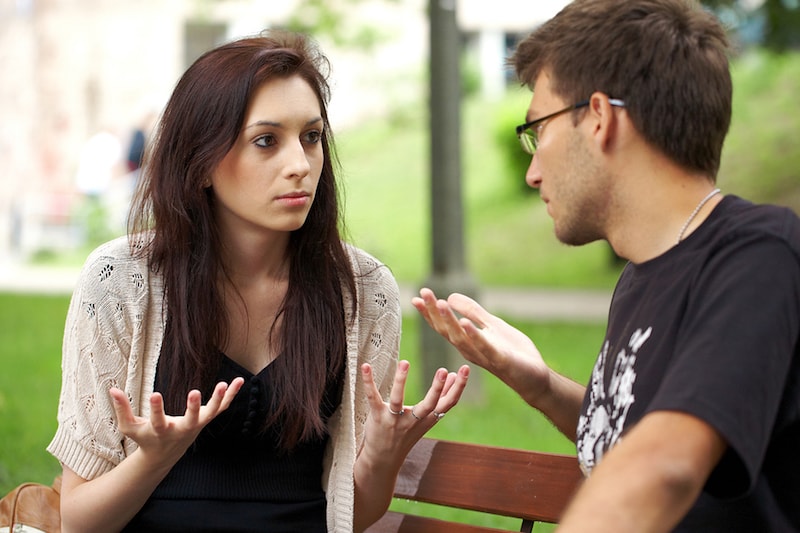 When you get married you want to believe that you are the only person your spouse has eyes for. Yes, there are many attractive people in the world and it’s natural for any of us to notice them. But what about talking about them – to your spouse? Is it okay for men to talk about other women to their wives?

We get a lot of questions, and see a lot of couples, who are having problems because the men in the relationship make a point of noticing other women. And many not only look, but they also talk to their wives about the attractiveness of the women they see. Below is an example of the kind of questions we often get, and my response.

Why Men Talk About Other Women

Why do men talk about other women to their wife? And is it insensitive for a guy to tell their wife that another woman is hot and sexy?" -Alyson P

Alyson isn’t alone in her question and opinion. There are a lot of men who believe it’s perfectly fine to look at and talk about other women to their wives. Unfortunately, those who do this don’t seem to realize how insulting this can be and the damage it can do to their marriages.

Here’s my response to Alyson.

Those are great questions.

First of all, not all men do this -- in fact, most don't. Men who do talk about other women with their wives are not being respectful or empathetic to their wives. So, yes, it is insensitive to tell your wife another woman is hot and sexy.

What underlies your questions is the nearly universal habit of men noticing other women. This issue comes up regularly in my counseling for men and their partners. Men being visually attracted to other women, even in just the form of noticing them, can take several forms:

I'm a guy, so I know what a challenge this can be for men, especially because we are wired to be visually stimulated and live in such a sexually orientated world. I would ask for some empathy from women about how hard this can be for us. Nevertheless, we men need to control our behavior because the above actions are:

When Women Look And Talk About The Opposite Sex Too

Although it’s most often men who are the culprits, it’s not always the men who are looking.

I’ve worked with men whose wives also openly look at, and talk about, the attractiveness of other men (and sometimes other women) as well. As humiliated and disrespected as women can feel when their husband looks and talks about other women, men can feel equally so when their wives do it.

It’s important to understand that looking for either men or women doesn’t mean cheating.

Yes, it can feel like that’s what it will lead to, but generally speaking, that’s not the case. And, although I wouldn’t advise it or say it’s appropriate behavior in any way, openly appreciating the attractiveness of other people may speak to a level of comfort and security in a relationship, especially in women. The mindset being that those other people don’t pose any threat to your relationship because your relationship is strong.

Of course, we know that’s not always true.

Is It Okay For Men To Look At Other Women – And Talk About Them?

We all have insecurities about how we look and how attractive we are. And it's easy for these to be triggered by more attractive people, especially people our partner notices. When our partner then talks about them and their attractiveness it just emphasizes our perceived deficiencies even more.

For most men it's not their intent to make their wife feel insecure, unattractive or inferior. But it's often what results by their talking to them about other women, especially how attractive they find them. It's just not necessary or considerate to talk to your wife the way you might talk to a buddy about a woman. Our love for our wives should produce a level of respect in which we restrain ourselves from making unnecessary comments.

The bottom line is that if it makes you uncomfortable you need to speak up and your husband (or wife) should be willing to respect and respond to your feelings. And you should ask and expect them to as well.

Unfortunately, a lot of women especially struggle with having a healthy self-identity regarding their appearance and don't value themselves enough to expect this from their partners. They may have also been conditioned to find it normal that a man they’re with looks at other women and hide their discomfort. This doesn’t have to be the case – if you feel like it’s disrespectful, it probably is.

Don't be the kind of wife who allows bad behavior to continue, you deserve to be treated better. If your husband doesn't know how to change his behaviors, that's okay, he can learn how by going to marriage counseling designed for men where better behavior is taught.

Editor's Note: This post was originally published May 15, 2010 and has been updated with new information for accuracy and comprehensiveness.