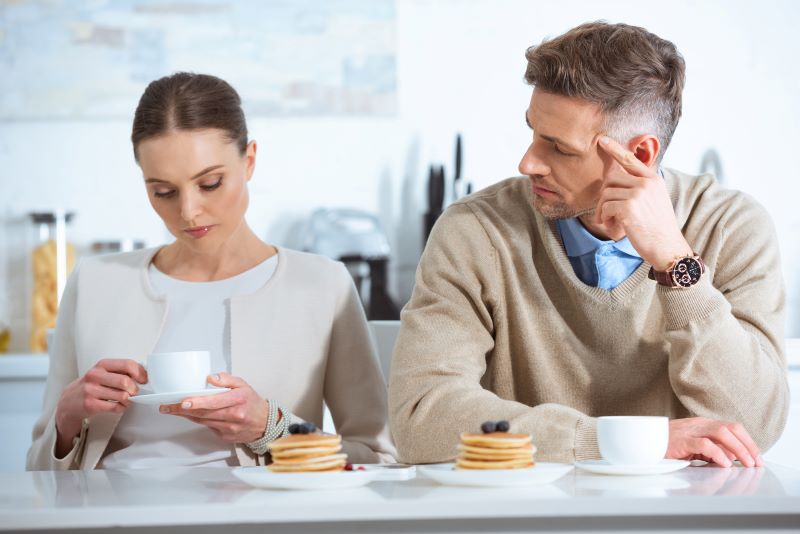 Guys, you’ve all been there before, right? You think everything is fine, but your wife operates as though you aren’t even in the room. She walks by you barely acknowledging your physical presence, and every question or attempt at engagement is met with one-word, monosyllabic answers, a “hmmff” or some other sound, or flat-out silence. And there you are, left saying to yourself, "Why is my wife ignoring me?" and, "What does it mean when she ignores me?"

Well, the good news is that you’re not alone. There are many guys out there who’s wives are ignoring them too and wondering the same thing. The bad news is that there’s not an easy answer or an immediate solution. In fact, if your wife is ignoring you, there are a few things you need to consider and likely do to get your relationship back to a healthy place.

What Do You Mean She Ignores You?

When you say your wife ignores you, it sounds rather straightforward – but it’s not. Before determining what her behavior means and what you should do about it, you need to first be able to define (even if it’s just to yourself) what being ignored looks and feels like from your perspective.

Dr. Kurt works with men daily that feel they're being ignored by their wives. According to him,

'My wife ignores me' is a complaint I hear often from the men I counsel. Most of the guys have assumptions they've made about why, but truly don't really know because they haven't asked. Apprehension or fear about what they're wife will say if they do ask is the primary reason they don't. Why poke the bear, right? Not wanting to be told of their accountability in hurting her, or being wrongly blamed or attacked are other reasons. Unfortunately, no response just leads to more of wives ignoring their husbands and husbands ignoring their wives right back. Avoidance is one of the biggest causes of relationship problems and your wife ignoring you is often a prime example of both partners practicing it."

Many men feel as though they are being ignored when what they are really noticing is a change in behavior. If your wife who normally brings you a cup of coffee each morning suddenly stops and rushes off to work with barely a "good-bye", you may feel ignored. But is she ignoring you, or has she got something going on at work that’s caused her to change her routine and it’s affected you? There’s a difference.

Or, conversely, have you been busy and preoccupied recently and are finally able to relax and reengage? It’s not uncommon for men who have busy schedules, especially those who travel a great deal, to feel like they are being ignored when they try to jump back into the family routine. But in this case, you aren’t actually being ignored either. Daily life just has a regular rhythm and routine that you haven’t rejoined or acclimated to yet.

If neither of these scenarios sounds familiar, it’s time to look at things from a different angle and consider in what way you are feeling ignored. So, consider the following questions to help clarify things.

Knowing the answers to these questions will allow you to better determine what the root cause of feeling ignored is and then you can figure out how to fix it.

What Does It Mean If My Wife Ignores Me?

The answers to the above questions can be a good first step in understanding what your wife’s behavior may mean. But no matter how you break things down, the act of ignoring someone in any manner is a sign of a communication problem.

If your wife is ignoring you or your needs, there is a reason. It may be something personal to her that she needs to work through, or it could be something that you’ve done or said that hurt her. And yes guys, it’s possible that you’ve done something and not realized it. Although, there are many gross generalizations made about both men and women, it’s very often true that women are more sensitive and will keep their hurt and insecurities to themselves, hoping you will "just get it." When you don’t, they may react poorly, possibly ignoring you.

If, on the other hand, she’s wrestling with something, she may not think to (or want to) discuss it with you. In fact, she may be just fine handling it on her own, but as she is working through it an unintended repercussion might be that she’s less attentive.

It never feels good to be ignored. It feels particularly bad when it’s your spouse ignoring you – it doesn’t matter in which manner. And finding the right way to respond to someone who’s ignoring you, especially someone you love, can be really tricky. Men in particular can find choosing the right response extremely challenging – sorry guys, but it’s true. With that in mind, let’s take a look at some of the DON’Ts for husband’s whose wives are ignoring them.

If your wife is ignoring you DON’T:

Now that we’re clear on what not to do, let’s look at what you should consider doing if you’re wife is ignoring you.

If your wife is ignoring you DO:

The bottom-line guys is that if your wife is ignoring you, there might be a problem. But you won’t know what if you don’t talk to her. It’s also possible that she has no idea that she’s ignoring you and never intended to do so. Either way, don’t wait, don’t retaliate – talk.