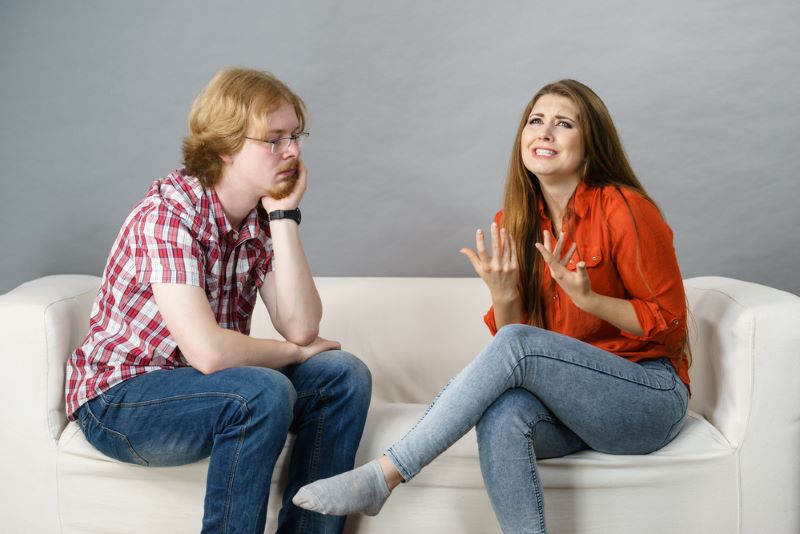 Does it seem like your wife or girlfriend wants to talk about every single feeling that she experiences? Maybe she wants to discuss your relationship all the time, or maybe she pushes you to share and discuss your feelings, and it’s driving you crazy.

Why is it that women seem to want to discuss their feelings so much? Or perhaps the better question is, why don’t men ever want to talk about their feelings?

As it turns out there are some very good reasons for both, and each respective gender would do well to make an effort to understand them.

It’s important to note, however, that over generalizing anything based on gender is a big mistake. People are individuals and each person will vary – sometimes greatly – from generalized standards. That being said, there are some things that are more typical for women or men and helpful to understand when it comes to communication and healthy relationships.

Why Talking About Feelings Is Important To Women

Women tend to be more intuitive and expressive when it comes to feelings. Not only can they decode feelings in a person’s expressions and vocal intonations more effectively, they also seem to express their own feelings more fully than men.

For women, feelings are a key component of intimacy. The discussion of feelings and emotions brings closeness and creates a bond. This is true in female friendships and in romantic relationships. The articulation of details of both positive and negative emotions creates an empathetic or sympathetic response that strengthens the partnership between you. It also reinforces her understanding of her importance to you.

By the same token, your ability to listen to her and express an empathetic or sympathetic response to her feelings will have a similar effect. It demonstrates respect, interest, and investment in your relationship. These are part of the way a woman perceives love and intimacy.

Without this level of communication, a woman can end up feeling disconnected from you and lonely within your relationship. This can lead to a number of problems if left unchecked. Emotional estrangement, affairs, and even divorce can result as you drift apart.

So, what does talking about feelings do for and mean to the woman you love? A lot actually.

Women and men define and experience love differently. This is both a great and frustrating thing. The emotional differences between men and women can be as alluring as the physical differences, but they are also a far greater source of disconnect.

To that end, let’s look at some of the things talking about feelings does for a woman and why women want to talk about their feelings so much.

So guys, before you complain about the fact that women seem to want to talk about their feelings all the time, first consider why they’re doing it and what it means. It’s very likely to your benefit to listen when she talks.

It’s no secret that men are less apt to talk about feelings. Society for generations has cast emotional men as weak and effeminate. Men are supposed to physically commanding and emotionally silent. For this reason, men for years haven’t been taught or encouraged to discuss their feelings or the importance of doing so.

This lack of education on emotional openness for boys doesn’t just fall on the shoulders of fathers to sons, mothers bear responsibility as well. We all seem to have played a role in propagating the strong and silent stereotype.

That’s not the only issue, however. Men are just generally less emotionally intelligent. This isn’t an insult, and it’s not true for all men. Most women are simply able to discern micro expressions of feelings more easily and then extrapolate how these feelings are impacting a person’s behaviors. This has often been referred to as “women’s intuition.”

Men also tend to feel things in the moment and take things one at a time. This is different from women who seem to collect and hold onto feelings. A woman has a long emotional memory whereas men will often feel it and forget it, if they felt it at all.

This puts most men at a distinct disadvantage when it comes to discussing feelings. A woman may be able to reference multiple occasions when certain feelings occurred, both good and bad, and then want to dissect the behaviors that caused said feelings. The ability of a woman to do this can cause a man to feel overwhelmed and shutdown as a result.

So, what’s a guy to do when his wife or girlfriend wants to talk about feelings, his or hers?

Tips For Men On How To Talk A Woman About Feelings

Because people communicate differently patience is key. But when it comes to talking to your wife or girlfriend about feelings there are a few tips that can go a long way.

Why Talking About Feelings Is Important For Both Of You

The importance of talking about feelings doesn’t break toward one gender or the other. It’s really something that’s crucial for the mental health of both. Stifling feelings and not talking about your emotions can lead to bigger problems down the road.

Dr. Kurt has not only counseled men in this area, but also found benefit in his own life by learning to talk more comfortably about his own feelings. When discussing this topic he had this to share,

Most men want to stay as far away from feelings as they can. This creates a huge communication problem for a lot of couples. One of the biggest differences between most men and women is in the familiarity of feelings. Ask a woman how she's feeling and you're pretty sure to get an answer. Ask a guy and you'll likely get, 'I don't know' or 'Nothing.' Do women feel and men don't? No, not at all. Women just have a lot more experience identifying and expressing how they feel than most men. We all feel - and feelings drive much of our behavior. Men just aren't tuned in to their feelings. Teaching men how to do this by building their emotional intelligence is something I do in my counseling. It's a skill that I've had to learn and one that has paid big dividends in a lot of areas of my life, not just my marriage. And it's done the same for the men I've counseled."

Feelings and emotions don’t just go away because you’ve chosen to ignore them, quite the contrary. Those feelings will find a way out, even if they have to take other forms in order to be expressed. Anger issues, depression, and emotional detachment are common side effects of repressing your feelings. Not only is this bad for you (male or female) and your relationship, it’s also bad for your family, friends, and even co-workers.

On the other hand, finding a way to express your feelings can have distinct benefits.

Guys, the woman in your life wants to be close to you, that’s why she wants to talk about her feelings so much. Understanding this and working to find common ground for maintaining closeness should be a common objective. And incidentally, is the best way to avoid the need for couples counseling.