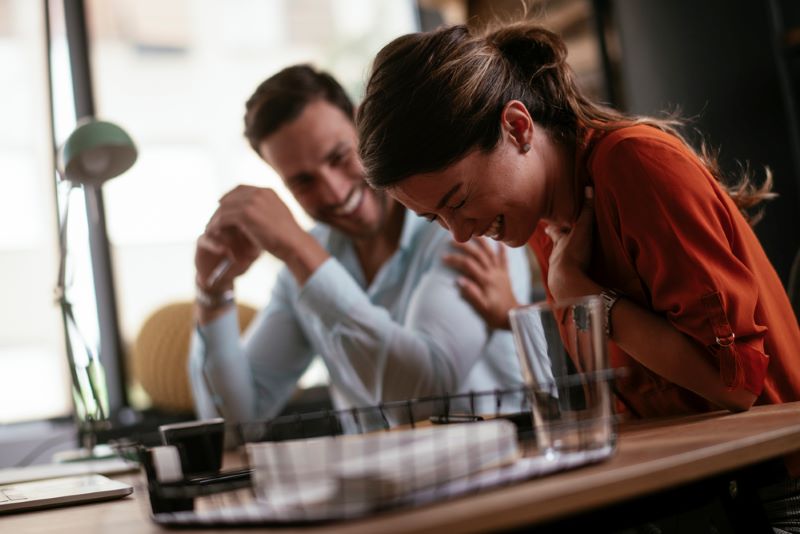 You tell your husband you think he’s too friendly with a coworker.

He says he’s just a ‘friendly guy.’ You say he’s being too friendly.

He says this is just his personality and you’re not letting him be himself. You say he’s crossing lines.

He says you’re insecure and trying to control him. You say he has no boundaries and doesn’t respect you.

Probably both of them. While this description is from a couple I’m currently counseling, I’ve heard similar argument thousands of times.

Pretty regularly a wife tells me she thinks her husband is too friendly with a coworker. And I can get the same complaint from husbands about their wives as well.

Is Being Friendly Cheating?

No, being friendly is not usually cheating.

But friendly behavior can entail a lot of things and I’ve heard actual cheating behavior described as “just being friendly” many times.

Most often people have a problem with their partners being friendly only under certain conditions. So, the argument that “I can’t ever be myself” is just not true.

What are some of the most common triggers?

There’s nothing wrong with being friendly, such as saying “hi” to someone, holding a door open, or showing some interest in them. However, when this occurs with any or all of the points above it moves past being friendly.

From the beginning of our marriage my husband has found the need to formulate secret friendships with women and to a point where his behavior is obsessive. The women have sent him revealing photos of themselves and he has made excuses as to why it happens. The latest case he connected with a female coworker and they exchanged personal cell numbers and texted excessively. At first he claimed the exchanges were friendly and work related. Most recently he admits that he did ask her where was the most risky place she had sex and she admitted with a coworker at work. I am absolutely crushed. I have no faith that things will change. When I confronted him while he was out of town he deleted all the texts.” -Sydney

So, why does Sydney think her husband is too friendly with a coworker?

Is Sydney’s husband “just being friendly” with his female coworker, or has he crossed the line and is cheating? I would say, yes, he’s now cheating.

Why? Because he has formed a mental and emotional connection with a woman outside of his marriage. Cheating takes place in a number of ways – not just physical.

Is My Husband Being Too Friendly Dangerous For Our Marriage?

Potentially. Being overly friendly certainly has the possibility to be dangerous for your marriage and that’s where the problem really lies.

Because most people dismiss this possibility and believe they would never cross the line (Sydney’s husband might even think this). What complicates this faulty thinking is that most of them don’t really know where the line really lies (This could be Sydney’s husband too).

Almost always before it gets physical it gets emotional. An emotional connection can develop very easily, especially in a work environment, and can be disguised and misinterpreted as being “friendly,”> not forming an intimate connection, which is what it often really becomes.

Additionally, the impact this kind of connection can have on your partner is vitally important as well. Sydney says she’s “absolutely crushed.”

I can’t think of anyone I’ve worked with in my 20 years of counseling who set out with the intention of having an emotional affair, but being too friendly with a coworker is how many of them started.

So, yes, a husband being too friendly with a coworker is a risk and problem for your marriage.

What Does My Husband’s Coworker Relationship Mean About Ours?

This is actually the most important question to be asking and focusing on.

The easiest and most common place to put your attention is on the other woman. Such as seeking to learn more about her, obsessing about her intentions, or in doing anything you can to get her away from your husband.

This is a mistake, however. Because your focus needs to be on your husband and relationship with him.

Here are a few things to recognize and consider when your husband is being too friendly with a coworker:

I have been married for more than 21 years. We have two sons. I love my husband very much and my kids love him. 15 years ago he met a 7 year older than him woman (and not pretty woman) at his job and was telling her everything that happened between us. 5 years ago she divorced and he started an affair with her but I was not sure because he was telling me that she is only his friend and he is only emotionally friendly dependent on her. 3 years ago he moved to Canada (me and my kids came one year ago, he sponsored me to get my Permanent resident visa), and she still lives in our home country. But my husband talks to her on Skype every night for more than one hour in the basement. I have told him I love him very much. Many times I went to hear what he was talking to her. He is promising her that he will bring her in Canada, marry her. He also tells me that he will leave me and our kids. But she does not have visa to move to Canada, she is 56 years old he is 49, so I think he is misusing her to abuse me emotionally. Three days ago I moved to sleep in another room. But he continues to talk to her every night on Skype, and I really do not know how to change him. His father and brother have the same behaviour. I miss him very much but as a good husband. I do not want to divorce him. Is there any way to change him? Please advice me how to change his abusive behaviour? I cannot convince him to see a therapist. I know that with adequate help he will change. He is not a bad person.” - Lillianna

Lillianna’s situation gives an example of how far a friendly coworker relationship can go. We don’t know the rest of her story. But I’ve seen similar ones to hers that do end with the husband leaving and divorcing.

Who Has The Problem? Him or Me?

He does for sure. However, don’t ignore the truth that this is also a ‘we’ problem, which means his wife plays a part as well. I’m not saying his behavior is her fault – that’s fully on him. But something’s also wrong in the relationship as I’ve described above.

I’m currently counseling Bryan and Lynn. They’ve been married for 23 years. Bryan has gotten too friendly and close to a woman in his office. While it’s taken some time for me to get him drop the denials, minimizations, and finally admit the friendliness has crossed lines and is wrong, he finally has now.

One of the factors we’ve discovered in our counseling is that Lynn can be very critical of him, and as a result he doesn’t like talking with her.

So, guess who he found himself talking to more and more?

To fix the problem and keep it from happening again (which it often does), both Bryan and Lynn need to make some changes. And to make the right and necessary changes they need to acknowledge that the problem is bigger than just his being too friendly with his female coworker.

So, if you believe your husband is being too friendly with a female coworker, your response will be much better received by him if you’re willing to see it as a ‘we’ problem and not just a ‘he’ problem.

This has made a big difference for Bryan. He’s opened up and been much more honest and transparent since Lynn owned how her behavior affects him.

While this article is focused on husbands becoming too friendly with coworkers, men and women can also be too close to parents, siblings, best friends, gaming buddies, etc.> I’m counseling two couples right now where the wives are too close to their mother and best friend, so this problem arises with both men and women and takes many forms.

Even though a lot of conflict can arise when you ask your husband if he’s being too friendly with a coworker, you need to do it and not ignore it. The risks are just too big.

Do you think your husband is too friendly with a coworker? Please tell other readers what that has looked like.