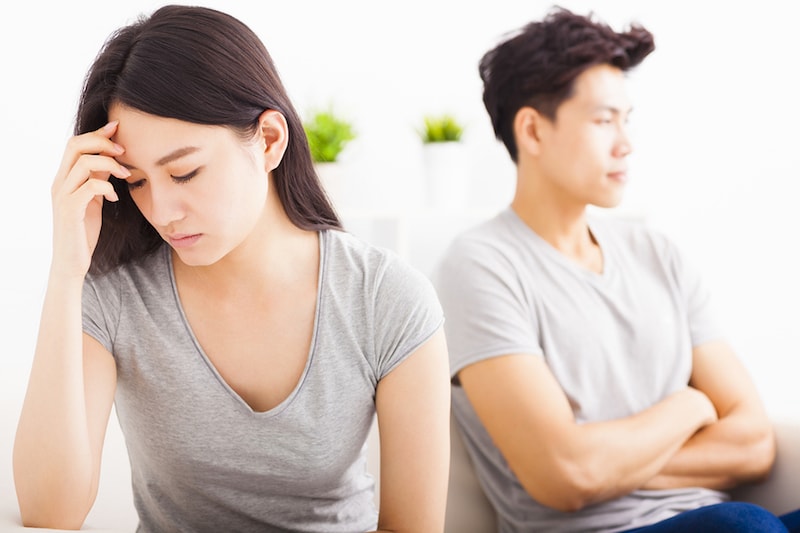 A common scenario in troubled marriages is that one spouse wants to end it while the other wants to stay together. I met with a couple yesterday where the husband wants divorce, and the wife doesn’t.

This is frequently the case in the marriage counseling I do with spouses. In fact, 2 other couples yesterday had a partner who felt the same way.

It's important to note that it's not always the husband who wants a divorce. Just as often it can be the wife who wants to leave.

What Makes One Spouse Want Divorce?

There are many things that send a couple down the path to divorce. Fortunately, being on that path doesn’t mean you have to reach that final destination.

A frequent pattern in these struggling relationships is partners having allowed their relationship to drift apart until one or both believes it cannot be fixed and therefore the relationship must end.

Both men and women are equally guilty of doing this. When the growing feelings of discontent are ignored for a long time and aren't dealt with, damage continues to be done and just compounds.

We have become disconnected emotionally and physically. Now my husband wants a divorce. He feels that there are fundamental and irreconcilable differences that make us incompatible." -Rachel

Once at this broken stage an easy explanation is that we have "irreconcilable differences." This is a convenient rationale, although very vague, to use to justify what is frequently a decision that has already been made - "I'm done."

This phrase is pretty conclusive - the differences cannot be made compatible. In other words, this relationship cannot be fixed.

Compounding this situation is the typical poor communication between partners, which only makes discussing their differences more even more difficult.

Lack of communication can easily begin as couples get busy. Unfortunately, the longer it goes on the more it seems “normal" and becomes just another irreconcilable difference.

Many wives are dealing with a husband who wants a divorce (husbands face this prospect with wives too). There can be a lot of factors influencing a partner to come to this decision.

Here's one couples' predicament that reveals a few of them:

I have been married for 6 years, and known my husband for over 12 years. Things haven't been that great for a while, and currently, I am living away (not divorced or officially separated yet) from my husband (for about 10 months), and he does not want us to get back together. My husband wants divorce, but I do not. He says he has not seen any personal growth all these years together, does not 'feel' it anymore, and finds us to be two right people absolutely wrong for each other with all the arguments (he absolutely hates them!). Currently, he is getting a lot of spiritual guidance from his younger sister, he meditates (although he still gets enraged and frustrated whenever I try to reason something or want something from him for my comfort or benefit) and also guidance from his divorced friends. He says he is at peace now, and does not want to move in together (as said above - doesn't 'feel' it anymore) even though he does acknowledge that we are creatures of habits, and can work on our differences. My husband also has an alcoholic father, but does not wish to explore if there is any remote chance he needs help with his anger problems because of some growing up issues. Given all this, I am really not sure what must I do. I try to keep my emotions in check, but I am not gonna deny that they do slip out once in a while, and he does show one off odd sign sometime that he cares." -Lillian

Their having been separated for a period of time has already had a multitude of effects, ranging from making it easier to stay apart to making them realize what they're going to lose. These effects can create a confusing state of thoughts and emotions making it hard to see what the next best step should be.

Nick says he "does not 'feel' it anymore," has come to believe they're "wrong for each other," and justifies that with their struggles to get along. This makes it easy for him to conclude that they're incompatible and shouldn't be married.

Something else influencing his desire for divorce is likely the guidance he's getting from well-meaning family and friends. Unfortunately, these people are also biased and jaded by their own experience and are not able to give the best divorce advice for him.

How To Respond To Talk Of Divorce

Every person who is contemplating divorce struggles with the question of whether or not that's the right decision. Most likely, Nick is very confused and uncertain about what he wants to do, despite telling Lillian he wants to divorce.

So, if you're like Lillian and your husband wants divorce, what do you do?

Here are a couple of points to keep in mind regardless of the particulars of your situation:

When your husband wants divorce it doesn't have to mean it's the end of your marriage. Sure, it could be, but I hear men say this every week and many of them never follow through with it. And most of those who do take a long time to complete the process of finalizing the divorce.

Better yet, if you see your husband wanting divorce as an opportunity you could actually save your marriage and possibly make it better than it's ever been.

Editor's Note: This post was originally published May 11, 2017 and has been updated with new information for accuracy and comprehensiveness.