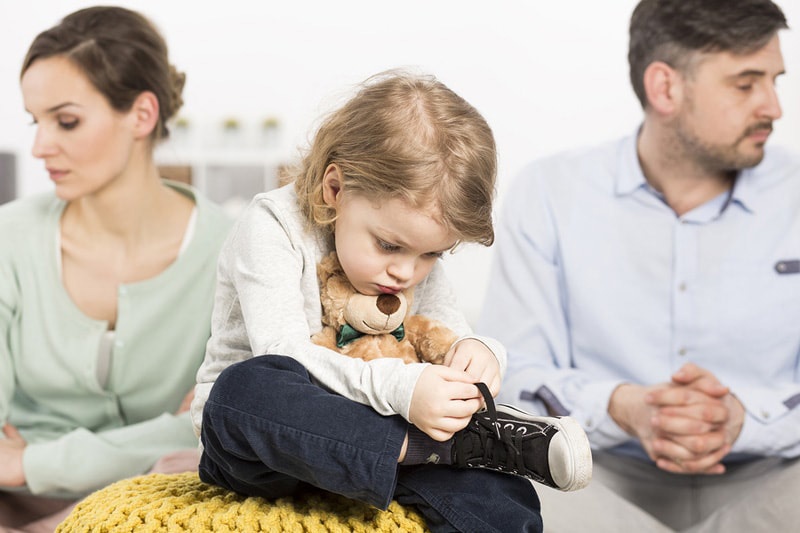 “Should we stay together for the kids?” is probably the first thing most couples that are struggling in their relationship contemplate. No one wants to break up their family or have their kids suffer by shuffling weekly between houses. Looking at it from that point of view, it seems like an obvious answer– of course staying together for the kids is right. Right?

Maybe not. There are several important things to consider when figuring out if a relationship is worth saving. Certainly when there are kids, they have to play a part in the decision. But staying together for the kids can’t be the only (or even the main) reason to stay together.

It’s also worth noting right now that this is in no way referring to verbally or physically abusive relationships. If you find that you’re in this situation and need help, find a local shelter or call the National Abuse Hotline at 800-799-7233 for assistance 24/7.

Here’s an example from the comments on the blog:

My father was abusive towards myself and my mother. Like you, my mother did not want to leave my father because somehow staying in this volitile relationship was better "for the kids" who would grow up knowing their father and then make their own decisions. This is not true. Your kids feel it, your kids know they are not in a happy home, no matter how much you try to shelter them... They know. Trust me!.. My relationship with my mom in my teens was strained because i resented her for sticking around… [I wanted] answers "why do you stay with him?" And that was the begining of the end... Our lives became better without him in it… Don't stay with him because of your children... That is the wrong reason." -Suzi

Is It Selfish Staying Together For The Kids?

I remember one Christmas morning, my husband and I were on our way to my parent’s house and we had stopped at a fast food place that had a drive-thru open for something to eat. While we waited at the window, two cars pulled in at the very far end of the parking lot, and were as far apart as they could be and still be in the same lot. Two little kids, maybe 5 or 6, jumped from one car and ran to the other and hopped in. That happened 13 years ago, and it made such an impression on me at the time (my daughter was only 2 and I was pregnant), that it still chokes me up. I remember telling my husband that we’d live on separate floors of the house before I’d ever do that to our kids.

That’s a pretty selfish attitude, when I think about it now - living separately in the same house because I couldn’t stand having to be apart from my kids on holidays. Looking back, those kids were so young. How bad must it have been that their parents couldn’t even say some sort of greeting to each other or even be parked close enough together that their kids didn’t have to look both ways for other cars before going to the other parent?

Would I stay for my kids and have them live in our house wondering why we either fought or never spoke, why we were always in a bad mood? That holidays would not be happy occasions because we were forcing ourselves to be there because we were staying together for the kids? That seems pretty selfish to me. It’s such a tricky situation, because on the surface it seems like the best thing to do, but without realizing it, our kids can become pawns in our adult issues.

Kids too easily get misused during separation and divorce. And a lot of times this is done by well-meaning parents who don't realize they're actually using their kids selfishly. Separation is about the adults, not the kids. It happens because the adults won't change. Justifying either staying or leaving 'for the sake of the kids' is ignoring the problem and wrong. There's a third choice to consider too - change."

I’m not saying anyone should split up or not work on saving their relationship – quite the contrary. It’s entirely possible to fall in love again. By working on ourselves and actively working on having a healthy relationship, even in less-than-ideal times, we can show our kids how conflicts are resolved, how to compromise, and can demonstrate what real commitment looks like. Here's an example:

I have been married for 12 years, have two kids…We've been going to couples counseling for over a year now to try to work things out. We're still working on it… He said that he loves me so much and that he wants our marriage to work, and that he feels stupid that a little thing like physical attraction could get in the way of a marriage that is otherwise "good". It's been rough and continues to be miserable some days, but we have two awesome kids that are worth doing everything we can to try and figure this out so that we can stay together as a family. Don't get me wrong, we won't stay together for the kids, but they certainly make it worth trying as hard as we can…" -Tami

I like to think that those kids in the parking lot had a really nice Christmas because hopefully they were with a parent who loved them and was happy, rather than an oddly quiet Christmas with no love in the house. This is a bit of a paradox though, since they probably didn't enjoy switching between parents in a fast food parking lot on Christmas morning. I just can't put a happy face on this topic, because in the end staying together for the kids is not really better than not staying together for them.