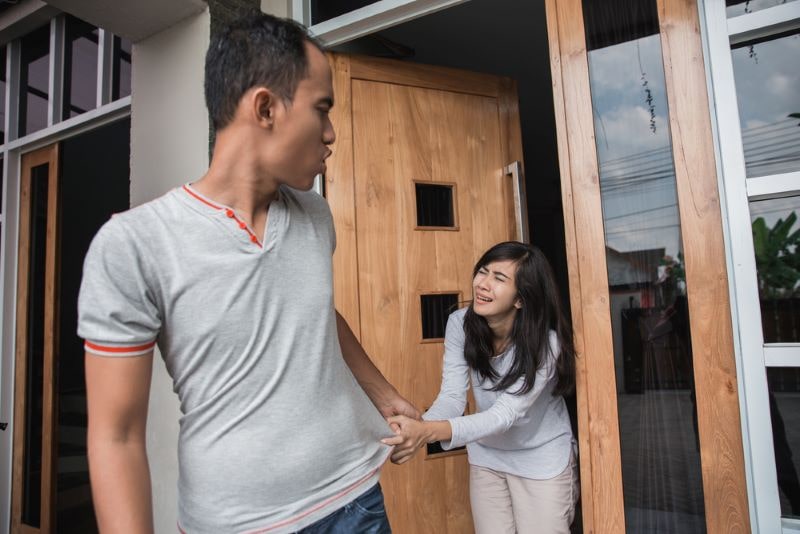 It often happens at a time when everything seems fine. You’re just doing every day life. Then out of nowhere your husband says he wants to separate.

Although most people don’t ever think about it, if they had to make a list of the most feared things spouses can say to each other, at the top would definitely be – “I want to separate.”

Some partners don’t even get told that until after it’s happened.

If your husband wants to separate don’t expect that you’ll always be told about it beforehand. I’ve counseled women who’ve found out by coming home to a note on the counter and all of his stuff is gone.

Typically, people have thought a lot about leaving before ever doing it – often for months and months (sometime for years). Dreaming about divorce and fantasizing how much better your life would be without your partner in it is a common escape when you’re in an unhappy marriage.

Signs Your Husband Wants To Separate

If they don’t always tell you, then are there signs to look for that he could be thinking about it?

Yes, but of course nothing is a certainty that that’s what’s really going on inside his head.

Any kind of change by a partner should be asked about.

Sadly, most people avoid rather than inquire. That’s a big mistake – one that just fuels being less and less connected.

If your husband’s thinking about separating then he’s thinking about the pros and cons of doing it. Avoiding exploring any changes you’ve seen can backfire in just being another reason he sees for him to leave.

She can see I’m struggling. And she doesn’t even care enough about me to ask!”

I want to know what’s going on with him, but when I’ve asked in the past he either says ‘nothing’ or I get the angry bear.”

Actually, one of the biggest signs your husbands wants to separate is that he’s not saying anything.

Any couple who’s become distant and disconnected is likely to have partners who are looking elsewhere to fill what’s missing.

Over the past month to two months my husband has told me he wants to ‘separate’ and that he is considering divorce. His main complaints are about the lack of sex in our marriage, that he feels I do not truly care or appreciate him, and that I lack motivation and ‘common sense.’ I know he has anger issues, and there are definitely things I need to improve for myself and our marriage if it is to work out. My husband has been distant, does not want to talk to me, and does need seem very supportive of the situation at all. I love him and want to make things work, but he no longer seems interested or willing to try. He has given up and says he has been dealing with me for 5 years and I haven't changed. I feel so hurt and confused because while I know we have had our arguments and disagreements in the past, I never thought that he was this unhappy with me. When I tell him this it angers him and he says that part of the problem is me not realizing that. I do not understand how all last year we were talking about having another baby, and just a few months ago everything was okay, but now everything is falling apart and I don't know what to do.” -Kassandra

My Husband Wants To Separate – How Do I Respond?

But don’t accuse him of wanting to separate either.

It’s hard not to be afraid that it could be true and want to ignore it, and equally as hard not to get angry and accuse.

If you want to save your marriage then your goal should to get him to work with you.

And the best way to get this from him is don’t fight his desire to separate.

So, try telling him about the changes you’ve seen – both in him and in your relationship. And then ask him what they mean.

You should expect to get a lot of denial.

But if his behavior says otherwise, you can’t trust that he’s being honest with you with his words.

It’s important to remember that if your husband wants to separate you can’t stop him – and you shouldn’t.

However, you shouldn’t help him leave either.

What you do want to do is get an agreement from him on a plan for the separation.

The biggest mistake partners make is separating without a plan. They just move forward with the mistaken belief that time will fix things, but it won’t.

Time doesn’t fix anything unless it’s accompanied by effort. And in the case of separation that effort needs to be specific and intentional.

Does A Separation Mean It’s Over?

Thinking that separating means your marriage is over is one of the most common misbeliefs.

Yes, separating could move you one step closer to divorce – but it doesn’t have to.

Staying in the same house together when you’re miserable and suffocating can do that exact same thing too.

The motivations for separating are what set the direction and influence the outcome.

My husband and I have been through a lot of tough times in our relationship that lead to me being unhappy and blaming him for some of the issues we had. Because of these negative things we started fighting more frequently. About a week ago, my husband and I got into a rather big fight that ended up with him saying he loves me but isn't in love with me. This kind of devastated me. I was in shock and I couldn't stop asking why. Then my husband said he wants to live separate from each other for a while without leaving the relationship. He said he wants to see where things go and see if he could fall in love with me again. He used to be head over heals for me and now that is gone. I don't understand why but I guess neither does he.” -Val

What appears to be missing for Val and her husband is a plan for their separation.

Identifying and agreeing on the goals for separating and having a plan on how they’ll be accomplished is what makes the difference as to whether your husband wanting to separate is most likely to have a good or bad outcome.

You should be smart about how you separate (as much as you can control it), but you don’t have to fear it.

I’m counseling a married couple right now and the husband has been pushing to separate. Pushing hard.

This became a daily fight.

He pushed to leave. She desperately hung on to keep him.

He ended up leaving and is now staying with his parents.

She struggled for a while, but then got enough strength to go out with some friends.

Then she decided she was going to get a gym membership.

Then she began to look on some dating sites to see if meeting someone else is even possible (she knows it’s too early, but was curious anyway).

His attitude has flipped and now he wants to come back to counseling. And she’s now the one questioning if she should stay married to him.

We’ve got a lot to sort out to fix their marriage, so the rest of their story isn’t written yet.

But her worst fear – her husband wanting to separate – has turned out (so far) to be a good thing.

If you think your husband wants to separate then here’s what to keep in mind:

Separating is actually an opportunity in disguise.

A separation can look like it’s over from the outside, but what can come out of it with the right plan and effort is an opportunity to fix your marriage and make it better for both of you.

Yes, it’s a gamble. But fighting a husband who wants to separate is a mistake. So, turn it into an opportunity to build a better marriage.

Are you thinking your husband wants to separate? Has he already told you so? Please share with other readers what that’s been like so you can get their feedback and support.