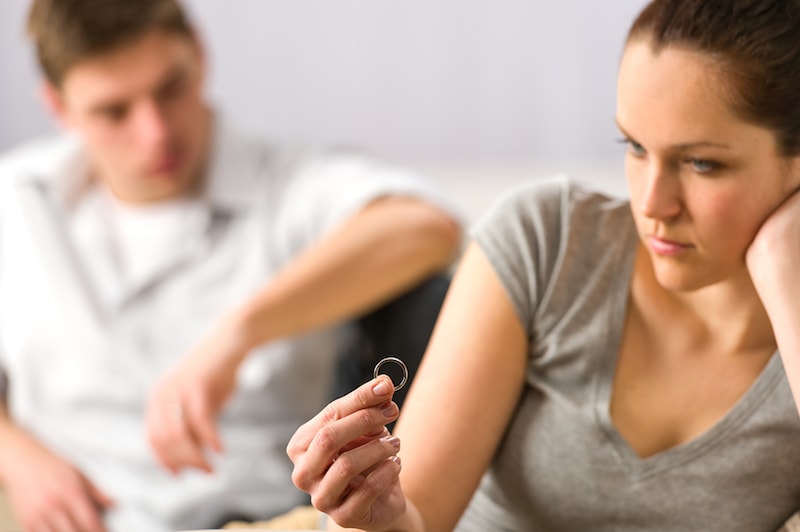 Are there dangers to dating while separated? You bet - and for both of you.

Relationships can get really complicated these days. With people marrying less and divorcing more, it's no wonder that dating while separated has become a commonplace and problematic issue for people.

It may seem like no big deal, I mean separated is nearly divorced, right?

Dating while separated actually poses a number of potential problems.

Why People Date While Separating

I most often run into people dating while separated when they're separated themselves and involved with someone else who's separated too.

A more accurate term for 'separated' in most of these cases would really be 'separating,' since few of these people are actually through their divorces or have completely ended their previous relationships.

In some cases couples, because of children and other intricacies related to married life, are still deeply involved with their soon to be ex-spouses. Or, they’re in a trial separation and uncertain of where the relationship is truly headed.

One of the most common temptations people fall for when a relationship is ending is the desire to find a new love - and to do so right now!

Often these people have been unhappy and missing love, companionship, and sex for a long time, and so there's a real pent-up, unmet need for love.

The desire for these things is completely normal. And feeling urgency to find them when they’ve been denied to you for a long time is also normal. Those desires have to be tempered, however.

Moving too quickly into a new relationship is almost always a bad idea, and these relationships rarely last.

Since I counsel men and women before, during, and after a relationship or marriage, including through a divorce, I frequently see people dating when separated.

And with the prevalence of cheating, much of the time one partner has already begun a new relationship and the other partner is now seeking to get 'mine.’

This is not a good way to start a relationship. Relationships that begin out of desperation and without both people being emotionally healthy are going to bring a lot of additional problems into your life.

Being separated and not dating is one of the hardest temptations to resist.

After all, you're free, right? Well, not really.

Reasons To Say ‘No’ To Dating While Separating

So what's the problem with dating while separated?

Here are 5 reasons why it's a bad idea and will only cause you (and your new love) a lot of heartache:

1.You're Not Really Available. If you're ending a marriage, obviously you're not legally available to remarry until the divorce is final, which can take quite a bit of time (more info about dating someone separated).

But when all relationships end, there's also a period of time that has to go by for the relationship to truly come to an end in other ways. You’ll have work to do mentally, emotionally, financially, and practically (living situations, legal issues, and friends) before you can honestly and fully put yourself out there.

2. You're Not Ready for a New Partner. Now note that I didn't say you don't 'want' a new partner. Almost everyone going through a separation does. But regardless of what you 'want,' you're not ready. No one is.

You probably don't realize it, but you're not going to be ready emotionally or mentally for quite some time. That can be hard to hear, but dating while separated interrupts the process of healing, growing, and becoming emotionally strong enough again to dedicate yourself to someone else.

Even if you feel emotionally disconnected from your ex, leaving a long-term relationship brings up a lot of complicated feelings. Sorting through them and getting yourself into a stable place where you're able to be fully available for another partner takes time.

3.You Haven't Learned Your Lessons Yet. Regardless of what you want to believe, you bear responsibility for your relationship failing. There are important lessons for all of us to learn from our failed relationships - about our partners and ourselves. Learning these and taking them to heart helps us to have more successful relationships in the future.

Sadly, most people rob themselves of the opportunity to learn and they most often do this is by dating when separated. If you don't take the time to learn from your failed relationship before jumping into a new one, you're very likely to repeat the same mistakes with the next person.

And a lot of the time it's driven more by wanting to escape the old relationship, rather than really wanting to be in the new one. This is not good or fair for you and especially not for the person you begin dating.

5. The Odds Are Really High It Won't Last. Nearly all relationships that begin during a separation won't last. It doesn't have to do with you or your new partner, but just the timing.

You're starting on the wrong footing. I often counsel people with big relationship problems around trust and insecurity that originate from their relationship having begun before the previous one ended.

There are additional practical reasons that dating while separated is a generally a losing proposition because of how it can complicate:

Are all big considerations that complicate a new relationship even in the best of circumstances. If you’re in the process of separating, then these issues become a greater concern creating even bigger hurtles to overcome.

What To Do When You’re Tempted To Date During Separation

It can seem impossible to control your emotions and desires during a separation.

These all comprise a tangled mess of feelings common during the separation phase. Of course, these emotions often don’t stop the interest in creating a new love connection, but usually drive it even more.

If you really care about your new love interest, however, you'll force yourself to apply more reason than emotion to your decision about dating while separated.

You'll also make your decision about more than just what you want.

If the new person that you’re interested in dating is really the person you’re meant to be with, then waiting until you’re really ready won’t hurt things.

Truthfully, if they’re smart they’ll recognize that you need more time as well.

So, as you’re contemplating your new freedom and desire for a new partner remember to make decisions wisely because a lot of heartache is at stake when you date while separated.

Editor's Note: This post was originally published November 9, 2013, updated on May 8, 2018, and has been updated again with new information for accuracy and comprehensiveness.