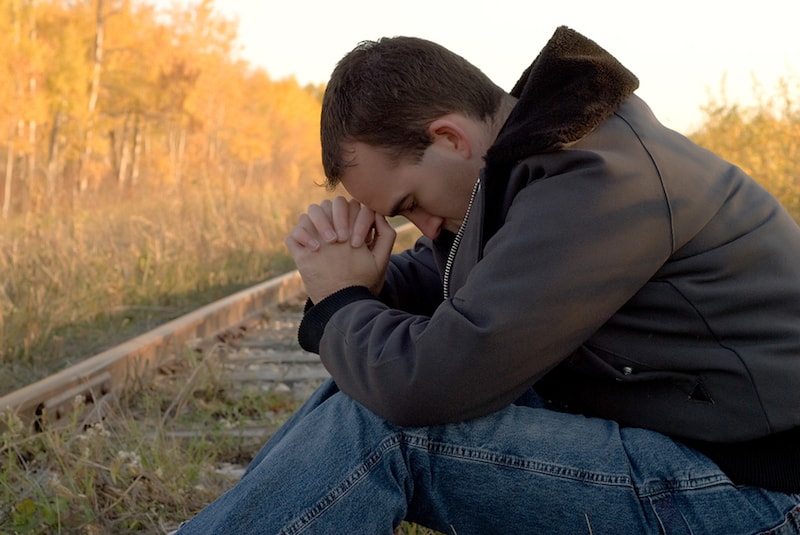 When you're struggling it's easy to feel like you're the only one who feels that way. Regardless of the problem, I can assure you you're not alone. Here's a midlife crisis story from a lonely, confused woman desperately trying to understand what's happening with her man.

Hi Kurt, I am really confused about this whole midlife crisis story with my husband: I don't know where he is at in the stages of his midlife crisis/transition. He has been staying with his mother but he has also had more than one issue going on.

My husband (age 45) he had a total ankle replacement over a year ago. Was taking the narcotics and I have been noticing the change in him being distance and him not wanting sex, not wanting to communicate, etc. If it was not me every-time initiated it, he would like fold up in a ball like a baby and place blankets between us. I started reading into the signs and symptoms of the narcotics addiction and oh my gosh to my surprise, he was having all the signs and symptoms....unusual thoughts or behavior, fear, anxiety, confusion, sexual desires etc. I learned narcotics are sex drive killers.

Then in August I was sitting at work and decided to text him and I said 'Hello, how's your day? I have noticed you are not you is there something wrong?' And to my surprise he text me back, 'I don't want to be married anymore, I don't want to answer to anyone. I love you and the kids, I am lost, confused, angry and I try and control it, it's me, not you.' WOW! I started crying at my desk and thought, 'Oh my god this can not be happening.'

He started letting his hair grow and everyone has told him but me it looks like crap... :). He would not open up to me as I begged him to, 'What is wrong?" What did I do?' Our oldest daughter and grandchildren moved in with us in July 2014 and he was very upset that I let this happen, he yelled and screamed at me. Then he asked for a divorce, he loved me but he was not in love with me.

Then something clicked for me, he's having a 'Midlife Crisis/Transition' and being addicted to the pills. He was already living at his mom's, I asked him to come home several times that we could work on this and even asked if he would seek marriage counselling, and he said what good is that going to do. He will not even look me in the eyes when he talks to me, he will not communicate with me unless it has to do with him and him only. I will text him and say, 'Hello how are you?' Days he will not text me back. I have asked if there is someone else...He says No or Nope.

He is so secretive about what he does and how he does it. I am not chasing him. My sons and him had a hunt this weekend and he came to the house and got all the stuff ready. And just as they were leaving he would not look at me when he said it, but he said 'YOU LOOK NICE.' I have not heard those words in years.

I have done a lot of reading and I have also printed up papers for him to read stories about Midlife Crisis. He don't answer me if I ask questions. I am just crushed. 'Yikes' My husband acts as if he is a kid in a grown mans body.

I don't text him everyday. I give him space but am I doing the right things? I don't ask about our relationship or where it is going. He has not asked about divorcing. I don't know if he is having an affair that has not been made light of. I am so confused by the mixed signals he gives. He tells everyone to mind their own business.

And I have lost some weight since July when I had planned on losing some weight (I didn't do it for him, I did it for me) total of 40 pounds. As much as I have read on your website and all the useful information, I have educated myself as this is time for me as well: keep myself busy and also work on my love and compassion for others as well.

Please if you can shed some light, is there hope in my life? I will wait out the storm. Does he come to his senses? Wow!! By the way he has not given me back the key to the house, nor has he taken all his stuff." -Brenda J.

Your midlife crisis story is far from unique. Below are some thoughts on some common aspects of your experience that hopefully will help you better understand what's going on with your husband.

Having multiple issues happening at the same time is not uncommon. Often a midlife crisis is triggered by, or happens simultaneously with, something else. Such as a health issues, like your husband's surgery, or a mental health issue, like his drug addiction. This can make it confusing as to what is actually causing what. For instance, is your husband's lack of interest in sex due to his narcotics abuse or is it the midlife crisis? The answer is probably both.

He's confused too. His erratic, impulsive, emotionally driven behavior are common symptoms of midlife crisis. His out of nowhere telling you he wants a divorce is typical as well. I'm sure he meant it at the time, but it's very possible that he'll change his mind multiple times on this due to his uncertainty over what will truly make him happy. Confusion by both partners is a common theme in stories of midlife crisis'.

There's a contradiction in your story of his midlife crisis that you need to recognize. He told you, "It's me, not you." And you're asking him, "What did I do?" I know you're trying to make sense of what's going on with him, but the truth is you won't be able to make total sense of it. Even he doesn't know what's going on. But he's right that this is more him than it is you. This doesn't mean you don't have things you could improve to make your relationship better; rather it means that the core problem lies with him. So a better question to ask is, "What can I do to help?" rather than "What did I do?"

"'YOU LOOK NICE.' I have not heard those words in years." For many women these are magical words. And they probably are to you, too. Be very careful not to read into these words more meaning than they really do -- like he's interested in getting back together. He was probably just trying to say something nice to you and nothing more. I could be wrong, and if I am, you'll get other messages from him that show he's interested again. But until then you need to not add extra meaning to this statement.

You say you're not chasing him, and that's really good because that's exactly what you shouldn't do. However, even though you may not intend to, by giving him your research on male midlife crisis and asking him questions about it, you are trying to fix him. Trying to fix it can be just as bad as chasing him.

It's totally understandable to be confused by the mixed signals he's giving. But his not following through on things is very common. Saying he wants a divorce, but not doing anything to make it happen is not unusual at all. It's possible that he's having some type of an affair, or is doing something else that has got his focus, but most often these distractions don't last.

The best thing you can do is to focus on taking care of and improving yourself, which it sounds like you're already doing. If there are things he's told you in the past that he doesn't like, such as the extra weight or that you nag him, it would be a good idea to work on changing those things about yourself.

Will he come to his senses? I can't tell you without talking to him. The best thing you can do to influence that answer is to get the expert help you're seeking on this blog. Talking to a professional counselor with or without him is the next step and one I'd strongly recommend so you can learn more about what to do in your specific midlife crisis journey.

All midlife crisis stories share many of the attributes that you've described. Even though you feel alone and very confused, you're really far from alone. Check back on this post in a while and you'll see comments from others who are going through the same thing.

Note: If you have a story about a midlife crisis, from a woman's or man's perspective, please share it in a comment below. The more we all share the less alone we'll all feel.