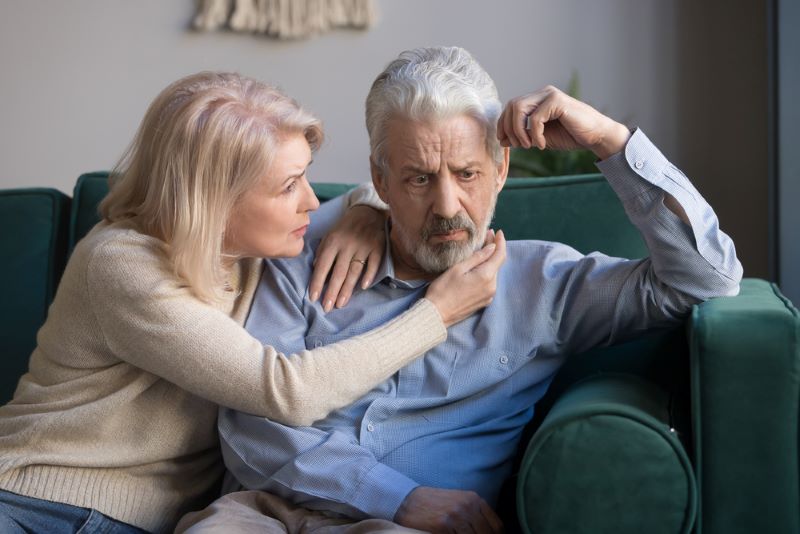 Being in the middle of a midlife crisis can seem pretty hopeless – whether you’re the person having one or their partner. So, it’s understandable (and normal) to be asking the question, can a marriage survive a midlife crisis?

However, it’s almost always the partner of the person in midlife crisis who’s doing the research to find the answer. The person in the middle of a midlife crisis isn’t usually seeking to understand what’s going on with them, they’re typically solely focused on trying to find ways to change how they feel.

Do these marriages seem hopeless?

They’re not. All are three are in counseling with me. Sean actually comes to counseling together with Linda. Peter still comes by the house a couple of times a week to see their college-aged kids. Vincent told Therese a couple of days ago he wants to pause the divorce proceedings.

Which of these marriages will survive their midlife crisis is still an unknown. But there are reasons to have some hope for each one.

What Percentage of Marriages Survive A Midlife Crisis?

I am not aware of any research that provides specific statistics that answer the question of what percent of marriages survive a midlife crisis. And if there is anyone citing a number, I’d be a bit skeptical about the accuracy of it.

I treat midlife crises every day (and have for almost 20 years) and I don’t even know the percentage that survive. I personally know many who have, as well as many who haven’t. I also don’t know what happened with even more of them. In fact, for most of the cases in which I work I don’t know the ultimate outcome.

I am a husband trying to survive my wife’s midlife crisis. I feel I have tried everything but she has completely lost connection with me. I am at a loss of what I can do to save our marriage and give her the right support, which is hard when she has got the mindset she wants nothing to do with me, but still shows little signs that she does.” -Eric

Here are a couple of factors that complicate answering the do marriages survive question:

Many people are cancer survivors. However, it’s not uncommon for cancer to return again. And the same can be said of midlife crisis.

What Does It Mean to Survive A Midlife Crisis?

Unlike cancer where people can be cancer free, with midlife crisis people can have no outward signs but that doesn’t mean the factors that caused the MLC are all gone.

Actually, it’s extremely common with midlife crisis for the underlying causes to go untreated. This leads to surviving a midlife crisis just meaning making it through still together, but not actually changing or fixing anything.

Sean and Linda are still living together. In fact, they’ve been together since high school. They come to counseling together too.

His midlife crisis began 20 months ago – or the outward obvious signs began then when he cheated. They started therapy 2 months ago (only after 18 months of craziness). We’re making progress, but again he’s still communicating with the other woman and is stuck on what he wants to do with both his marriage and the affair.

This week in counseling he said when he gets off work...

I want to keep on driving... Going home stresses me out... I feel overwhelmed when I walk through the door... I often think about leaving and being on my own... I just want everything to be over with.”

Unfortunately, most partners think like Linda and believe surviving a midlife crisis is just getting their partner to stay – and forget about the other woman. But even if that happens, how will she know Sean’s inner thoughts and feelings like the ones above are gone?

My husband is in the midst of his disruptive midlife crisis and left us his family a month ago. I love him very much and I am not giving up on him. We've been married for 20 years and our marriage was great until he started his Midlife Crisis 2 years ago. Our marriage has been a roller coaster ride since then, especially when it really blew up a year and a half ago when I found out that he’s cheating on me. I need help and advice on how to save him and bring him back home.” -Kathleen

Determining if a marriage has survived a midlife crisis is too often based on still being together and the absence of outward symptoms. This is wrong and a big mistake.

How To Thrive Not Just Survive

The desired outcome of a midlife crisis should be more than surviving. Not only is that too low of an expectation in my opinion, but it doesn’t address the most important issue of all – fixing the causes.

Here’s an example of what surviving a midlife crisis can look like:

We have been married for 50 years. 5 years ago survived my husband’s midlife crisis and 5 year affair. Refuses to reach a compromise when I ask for any intimacy. Does love me, few kisses, hugs, friendly, but treats me like a sister - ?? Too old to leave, still love him, but dealing with anger and anxiety, and depression, especially at night in same bed. Hurts too bad to be next to him, so I go to another bedroom, this seems to help me go to sleep. How can I live being content in this situation??” -Sandra

Does this marriage look better, worse, or the same?

It’s not possible for us to know with this little of information and history. But it sure doesn’t look better. And I would say that his midlife crisis may not even be over, because there are signs of some of the original factors still being present.

Sandra’s marriage is an example of what a marriage can look like after “surviving” a midlife crisis. There are scars, often open wounds are still present, and even signs that the illness is still there just below the surface.

In order to thrive, not just survive, the ending of a midlife crisis has to be about more than returning to what used to be considered ‘normal.’ This means identifying the causes, understanding why the response to them brought about such extreme choices and behavior, and demonstrable work and evidence that changes have been made to resolve those causes.

This process takes time, effort, and usually professional counseling help to do properly and effectively, but it is doable. I’ve seen many relationships thrive afterwards – becoming better, stronger, and more satisfying for both partners.

Both partners have a choice – what do they want their lives to look like afterward? Having your marriage survive a midlife crisis is one choice, not surviving is another, but a third option of thriving is possible too. Which one will you choose?

Is your marriage struggling to survive a midlife crisis? You’re far from alone. Thousands of people visit this website every day and many are in the same situation. Please consider leaving a comment so others can hear your story and you’ll most likely get some feedback and support.