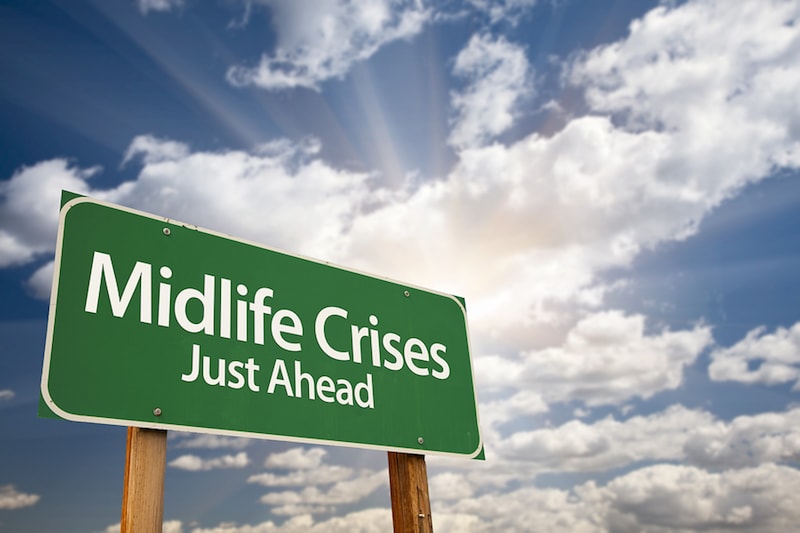 If you're contemplating a midlife crisis divorce, pause.

Regardless of whether you're the person making the choice to end it or the one that it’s being forced upon, take a couple of minutes to read this article and see if you can see yourself somewhere in it.

Does a midlife crisis mean divorce? It's certainly easy to think so. After all, when your partner checks out, often moves out, and shows no interest in coming back, or even worse, has a midlife crisis affair, what else are you supposed to do? A divorce may seem like the only option.

It's also easy to let you mind go to the worst-case scenario -- you've lost him (or her) and things are over. The life you built, family you created, and home you share -- all gone. He (or she) may have even said they’ve fallen out of love, or that they love you, but aren’t in love with you.

A midlife crisis is as confusing for the person experiencing it as it is for those that love them. It can cause a temporary loss of perspective and understanding for both partners. However, when you as their spouse take a step back and make an effort to better understand this, it can really help you in making the difficult decisions you’ll need to make going forward.

Do all midlife crises end in divorce? No. Here's a not so unusual example:

My husband told me 5 months ago he wanted a divorce and that he wasn't in love with me anymore. He was going to leave after the holidays. They came and went and he stayed. He was going to leave in February, then it was eventually, now it is after our daughter graduates. He asked me to attend his family Easter dinner with him, but still insists he is done. I am not sure that he is and that is why he hasn't left even when I told him to. I think he is having a midlife crisis and doesn't know what he is doing." -Liz

Liz's husband is pretty typical example of what a midlife crisis divorce often looks like.

She's right in concluding that he "doesn't know what he is doing." Confusion and contradictory behavior are common during a midlife crisis. Men in midlife crisis are lost, and unsure and uncertain of what they really want.

Often, they’re hearing the ticking of time passing them by and have a desire to chase after anything they think will make them feel less unhappy. This can lead to erratic behavior and irresponsible choices.

How Midlife Crisis Leads To Divorce

Part of what drives a midlife crisis is dissatisfaction and a desire for things to be different. One of the easiest things to change is the relationship. Changing yourself takes work, but checking out of the relationship just takes packing a bag, getting drunk every day, or having an affair.

So, it's typical to have men talk about divorce, say they want a divorce, but never follow through with it. Saying they want to end the relationship keeps their partner at a distance, it gives them power and control, but more than anything it just comes out of the confused state they're in about what they should change to feel happier.

He just wants to do his own thing, that really is the only other reason he can give me. 4 months after moving out, he has decided he wants to divorce. He pops round occasionally to see our son and on leaving gives me a hug and kiss on cheek! The divorce is now going through. I am still in utter shock and cannot believe my once adoring loving kind appreciative husband has turned into this selfish person. I honestly do not recognize him anymore. Both of our children think he has been abducted and replaced with an alien. He has joined the gym, bought a fast car, started drinking again, something that he did give up as it always caused arguments, he has changed his style of dress and booked himself a holiday and flew off into the sunset. I am just trying to understand what has happened to my husband, my marriage etc. Nothing makes sense anymore." -Tiffany

Does Tiffany’s husband sound familiar? There is a reason that stereotypes exist and her husband is displaying some of the classic symptoms of a male midlife crisis.

Midlife Crisis Divorce What To Do

So, what should you do if you’re facing a midlife crisis divorce? Here are some suggestions, although it should be understood that in any situation so fraught with emotion and pain these are easier said than done.

Thank you for your advice about 'giving him space'. After two years of being treated like a discarded piece of garbage by my husband of 20+ years, going into my own depression and experiencing anxiety over what was happening in our marriage at this point complete with texts and emails urging him to recognize what he was throwing away etc. I decided to give him is space. Just a few weeks later he started reaching out to me and told me he was ashamed etc. and I latched onto it immediately and started to get my hopes up. I was wrong - he immediately started trying to manipulate the situation so that he could come back and continue to live as a bachelor and do what he pleased as, after all, it's he who is going through the midlife crisis and we should do whatever it takes to 'entice' him to stay etc. I refused, felt like I had taken a huge step backwards in my own recovery, felt even worse about the fact that our children also felt like there was hope and then realized that they were not on his agenda of people he liked to spend time with either. 6 months later we're a month away from when I can legally file for divorce and he's started reaching out again. I'm so glad I gave him his space because it was just the space I needed to realize that he has overstepped every boundary of our relationship (and I'm very open minded) and now I'm in a place where I actually realize that I have a fortunate life with many positives." -Charlotte

Although midlife crisis and divorce often go together they don't have to and shouldn't. Divorce is a life altering decision that should only be made when both partners are thinking clearly and not overrun by emotions.

Even if one partner is determined divorce is the answer you don't have to go along with it easily, or without seeking couples counseling and exploring other options for resolving things.

If you're dealing with a partner who says they want a midlife crisis divorce, don’t just ignore the talk or threats. While they often go away or never materialize, you still need to work to get things back on track.

Yes, the prospect of a divorce is certainly scary and can inspire frightened and desperate behavior, but you can instead choose to try and understand the midlife crisis your spouse is experiencing. With more knowledge you’ll be more effective in helping them understand the reality of what they’re going through and about to give up.

Did you see yourself somewhere in here?

Editor's Note: This post was originally published July 13, 2016 and has been updated with new information for accuracy and comprehensiveness.