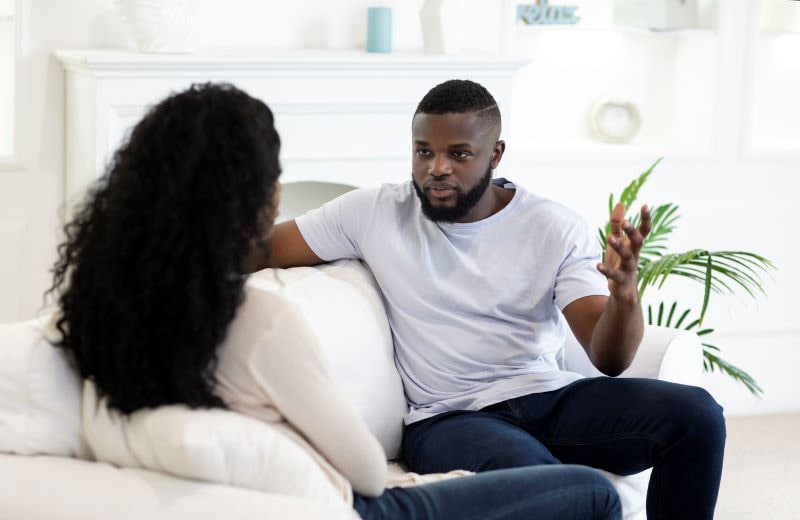 If something is our fault and it’s pointed out to us, many of us are going to try to shift the blame and say it’s anyone but us. Denying responsibility is almost an automatic response for most people. This could be the quickest and easiest explanation for why husbands will blame their wives for their midlife crisis. However, there’s much more to it than that.

First, an important factor to know is that most men won’t even consider the possibility that they’re having a midlife crisis. Doing so would imply weakness or failure on their part and that goes against the masculinity code. Always portray strength is almost an unspoken motto. Second, when husbands are blaming their wives for their midlife crisis, what they’re really blaming them for is their lack of happiness.

Afterall, isn’t marriage supposed to make us happy? Well most people may have that expectation, but the high divorce rate would suggest otherwise. Marriage actually can and should make us happy, but a lot of people struggle to find it.

My husband of 25 years is going through a midlife crisis. He has filed for divorce. He came home one day and said he's not happy and hasn't been for several years. This was a shock to me, I thought everything was fine. He has been moved out for 4 months, he won't talk about our marriage or our past, he gets mad if I bring it up. I ask him how can you erase the 25 years we had, and he shuts me out. He said he needs to find happiness and peace within himself. He is 54 years old and I believe his childhood has a lot to do with this. How am I supposed to go on with life without the man I love so much? My heart is broken! Why does the wife, the one that has always been there to support, comfort and love him dearly get the blame for this? Please help me to understand how I caused his midlife crisis!!" - Sharon

The quick and dirty answer Sharon is that you’re the easiest target. But as I said earlier there’s more to it than just that.

Why Men Have A Midlife Crisis

If husbands blame their wives for their midlife crisis, then that must mean that men have a midlife crisis because of the woman in their life. That may make sense to the confused guy, but for an expert in midlife crisis like myself it’s just gibberish (i.e. nonsense).

That’s not meant to be a complete list of all the reasons, but it covers most of them. And if you know a man in midlife crisis then most likely you can see some possible connection to one or more of these descriptions. While there’s no question wives can play a significant role in any of these situations, they don’t determine their husband’s responses to them - the husbands do. So why then do wives get blamed for their husband’s midlife crisis?

Why Wives Get Blamed By Their Midlife Crisis Husbands

Every relationship has baggage. I was counseling a couple yesterday and the husband was listing ways they communicate that he’d like to see change. As is typical between partners they were all changes he wanted his wife to make – none had anything to do with changing his part in their communication (both sexes do the finger pointing well). Additionally, while he had valid points, he couldn’t come up with any recent examples of any of these happening. Everything he cited was more than a year old, and some went back 5 to 10 years.

We accumulate the most baggage with our partners. And when a guy’s in a midlife crisis and looking for reasons why he’s so unhappy the easiest person to blame is going to be his wife (as Sharon demonstrates above). Sorry ladies. It’s not right, but it’s the way it most often works.

Another common element of why wives get blamed is the habit of keeping a list of wrongs. When we’re hurt, especially emotionally, we usually don’t forget it. While our brain has this recorded, many us reinforce that memory by thinking about it again (often playing the even over and over again in our mind). Like the husband above – “Before we had kids you would...” (this is going back more than a few years as their youngest is now 16-years-old).

Blaming our partners is almost as much of a part of relationships as sex. And many husbands would argue that their wives do it much better than they do. So, if blaming each other is so common, we really shouldn’t be surprised when husbands blame their wives for their midlife crisis.

We’ve been married 18 years and 1 year ago my husband announced that he loved me but is not in love. Everything was all my fault and I needed to change and meet his needs of dinners, movies, car rides (in silence), bike rides, kayaking, and paddle boarding. I did everything he asked. In return I asked for love and affection and he refuses. When I try to talk to him he tells me “I don’t love you and want a divorce”. He’s said that 7 times in the past year and destroys me every time. I set the boundary stating that he had to see a doctor for his obvious depression, get on some meds and if he said it to me one more time that I will be the one to file. He said it again on Sunday. I go to counseling and therapy. I believed that everything was my fault and that I caused his midlife crisis. I have turned myself inside out trying to make him happy and get back to the loving couple that we used to be. My therapist told me that everyone has issues to deal with but not “everything” that’s gone wrong in my marriage is my fault. I’m on antidepressants, I’ve had 2 heart attacks because of this and I now have high blood pressure where I didn’t before this started. I know that I sound pathetic and desperate but I deeply love my husband and don’t want a divorce. My doctors have told me that he is literally killing me with the way he’s been treating me this past year. I can’t bring myself to leave or make him leave." -Kessa

Who’s Responsible For Your Happiness?

Our partners are supposed to make us happy, right? After all, that’s the whole point of being in a relationship. Isn’t that what Tom Cruise meant in the movie, Jerry Maguire, when he said to Renee Zellweger . . . “You complete me”?

A common belief is that others are responsible for how we feel. We hear people all of the time say, “You made me feel...”

In actuality no one makes us feel anything. We’re in control of our feelings. Other people, especially our partners, influence how we feel for sure, but they don’t control how we feel.

Unfortunately, a frequent explanation husbands use for their midlife crisis is that their wives didn’t do something (or a whole list of things) to meet their needs and make them happy, so it’s all her fault. Despite the truth that we do greatly influence our partners, it’s completely unfair, inaccurate, and wrong for a husband to blame his wife for his midlife crisis. Yet it happens a lot. Actually, wives get blamed to some degree in almost every case.

I'm pretty certain my husband is going through a midlife crisis. I feel like someone kidnapped him and replaced him with a stranger. At first he blamed me and stated he needed space and to get away from me. However over time I began to notice things he'd say that made it clear the problem isn't actually me. He seems all mixed up. Says his mind isn't right. Surprisingly enough I'm confident he isn't having an affair. He seems lost and like he's trying to figure out what's wrong with himself. After several months I decided to detach. It wasn't hard because I got tired of being around him. He's miserable, disconnected from me and the kids, irritable, forgetful. So I give him his space. He moved some of his things into his friends spare room but has still slept at home on our couch more than he sleeps at his friends house. Recently he admitted he's been neglecting our young boys and a week after that he apologized for his attitude and stated that he hopes the counselor he will start seeing will help him "get through this and get my head back on straight". Does it sound to you like he is beginning to become more aware that this is his problem and it's not about me? He still isn't normal and even when he tries to be kinder and more connected he still seems "off". And he easily slips back into his usually disconnected self. Most of the time I have no clue as to where I stand with him." - Katie

We’re each solely responsible for how we feel and the choices we make that impact our feelings. Sadly, blaming our partners is almost an automatic response for most people, just as societally blaming anyone or anything else but ourselves has become extremely common too.

A midlife crisis is very complicated. Typically, there are multiple things happening simultaneously – the midlife crisis and depression, cheating, abusing alcohol are just a few of the biggies. So, getting professional counseling help is crucial to being able to decipher all of it and knowing how to best respond.

The following is no substitute for getting help, but here are a couple of quick tips to use when you’re getting blamed by your husband for his midlife crisis.

What does this look like? Something short and simple like, “We both have played a part in . . .”

The easiest response for a wife to have when her husband says it’s her fault he’s having his midlife crisis is for her to get defensive and argue about it. But you’re wasting your time. He’s irrational, not logical, so you’re better saving that mental and emotional energy. You know the truth. Remind yourself of it and give him a simple response like the one above.

Dealing with the crazy-making of a midlife crisis is hard enough – believe me I know as I deal with them every day. Add on top of that getting blamed for it and it can easily send you over the top. I know what this is like too as I get blamed all the time in my counseling meetings for things that have absolutely nothing to do with me – I’m just another convenient target.

So, if your husband is blaming you for his midlife crisis I understand more than you know.

Are you getting blamed by your husband for his midlife crisis? Please share what that’s been like for you. You’ll likely get a response from other readers and you’ll know you’re not alone.