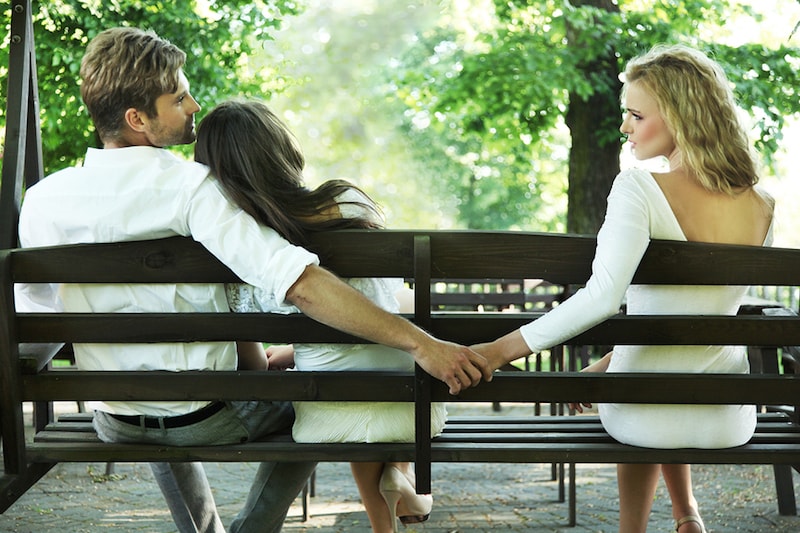 What every wife fears the most is the other woman in my marriage. Whether it happens intentionally or innocently, the effect of another woman’s involvement in your marriage is still the same -- it's destructive.

As we all know, the technology we carry around with us gives us instant access to a lot of things that can become problems for us. One example is the ability to communicate with anyone, anywhere, anytime, which makes having another woman in your marriage something everyone is vulnerable to.

Re-connection with old girlfriends through sites like Facebook, or the ability for text exchanges to become too personal and intimate can pose a real problem for a relationship. These things can start in a very innocent way and escalate quickly, especially if there are already issues in the marriage.

A man I started counseling recently is struggling in his marriage. In fact, he and his wife have decided to separate. Alec doesn't realize it, but the other woman in his life is also in his marriage. The relationship with this other woman started innocently enough, as it usually does. Not all people go out looking to cheat, in fact most don’t -- for many it kind of just happens.

For Alec, it started out with talking to a female coworker at work during breaks. At first it was just friendly conversation about work and what was in the news. Before long he was telling her about his unhappiness at home. As she showed more interest and concern, he told her more and more about his marriage and dissatisfaction with his wife. Although he didn't set out looking for it, he ended up having an affair with her. This had very little to do with a desire for a sexual relationship and a great deal to do with the emotional connection that they forged. This kind of connection is what can push people into taking things one step further and feeling like their behavior is justified.

Some of the men I counsel never even sleep with the other woman, but that doesn't mean an emotional affair isn't cheating or doesn't have a negative impact on their marriage or significant other. Unfortunately, most men and women in these situations do end up succumbing to the sexual temptation and have a sexual affair. This makes putting the marriage back together all the more challenging -- although not impossible.

Alec told me his relationship with the other woman "probably has influenced" his marriage and decision to separate from his wife. I had to stop and correct him, not "probably," but "definitely" it has. How could it not?

Unhappy husbands who bring the other woman into their marriage believe the new relationship helps them see what a different, better, happier relationship could be like. But what it really gives them is an inaccurate comparison that is unfair to their wife and marriage. Regardless of the problems you have with your partner, the other woman is always going to be more appealing because the relationship is new, in the honeymoon stage, and without the history you have with your spouse. Remember, your relationship with your wife probably felt very similar in the beginning.

Here's another example of what the other woman in my marriage can look like:

My husband and I have been married for only 5 months and we are having problems. I loved him so much and I married him, but after only 2 months of happiness together I found messages on his phone that he was communicating with his ex-girlfriend. He was surprised when I blew up. He said its just words and he didn't actually go around sleep her. I am hurt and angry that he is talking to her and ignoring me. My husband hates me for how I have reacted and he wants to separate."

It's not just men who can bring another person into the marriage either - women can be just as guilty. One of my patients once told me:

I've been with my wife for 18 years and I found out she is talking to another man on the internet, they have not had sex, but she says she loves him and no longer loves me. How can I get her back?"

And it's not always a romantic relationship that brings the other woman into the marriage, other types of relationships can also interfere:

My wife of 20 years has just moved out and we have two kids. One reoccurring argument is that she is always with her older sister. Her sister will call and my wife leaves on a Friday afternoon and does not return till 10:00 or 11:00 the next day. When I confront her on this she say's I'm controlling and that I don't want her spending time with her sister. That's not it, I have no problem with that, with them it's twice a week, she's her best friend and sole mate, something I wish I was in her eye's, but I can't & won't even try to compete with that, they are each others safety net for life or something."

The other woman in my marriage isn't always what we would expect. It's not always a woman, it can be a man too, and it doesn't even have to be a romantic interest either, a mother, sibling, or friend who is too involved in a spouse's life robs the partner and can destroy the relationship also.

Marriage is a commitment between two people to share their lives together. And while outside interests and friendships are important, they should not take away or replace anything from the marriage itself.

Problems in a marriage are normal -- all marriages go through rocky phases. The difference between those that survive and those that don’t is the way you handle those things. Bringing another woman into your marriage (or anyone for that matter) will not help. Even though it feels good, it will only make things worse.

So before you find yourself wondering, "how did we get here?" or "who is the other woman in my marriage?", consider taking some preventative measures. Working on your relationship now can save you and your spouse a lot of heartache later.

Please share your thoughts about the other woman in your marriage in a comment below. There are more than 50 comments from other readers -- check them out and see what others have to say.

Editor's Note: This post was originally published June 19, 2015 and has been updated with new information for accuracy and comprehensiveness.