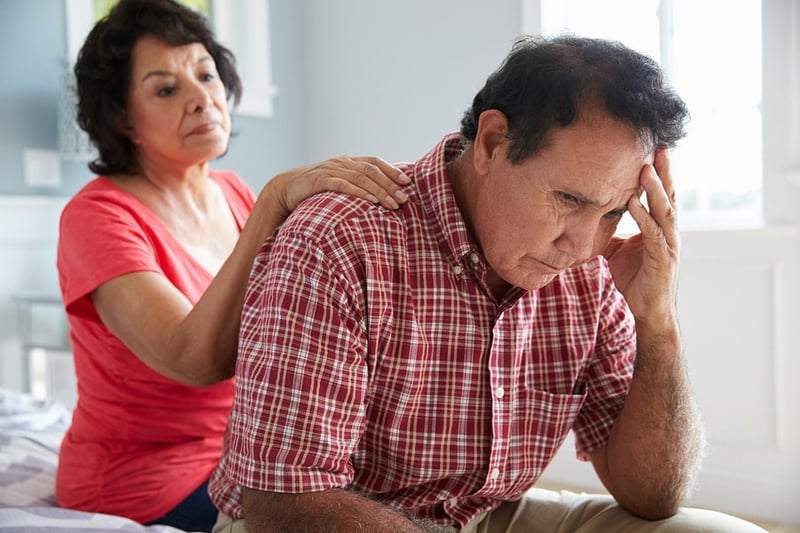 I have been married for almost 5 years (a second for both). I was totally over my ex when we met but he wasn't I don't think. He was married 21 yrs. when she walked out on him & the last child still at home (16 yrs). He did not want the divorce at all and fought it to the end and beyond. Now for our problem and it hasn't gotten any better, I have to hear about her everyday. It is always negative talk about how horrible she was, how this and that she was. But I am sick and tired of hearing about her on a daily basis. He talks to all our friends about her how she did him, how she broke up the family and broke their bank acct. etc.

Since we got married I can see that he is not happy as he was before, watching old home movies and looking at pictures he was always smiling and laughing, now it seems that he is always finding fault with someone, seems so angry, mad & sad most of the time. For sure he does not go around with that big smile and laughs all the time like before. I hate this, him being miserable which in turn makes me miserable. When I know without a shadow of a doubt how he felt about her, with his own words, and how he treats me, he treats me good and he tells me he loves me but as I tell him there is a big difference in loving someone and being in love with someone. He was in love with her and he just loves me. I feel cheated and feel used.......... I do not like being second best or that he just settled for me and that is how I feel. If he was falling out of love with her then we could go through one day without talking about her, don't you think? Another thing, in the 5 yrs that we have known each other he has forgotten my birthday 2 times, our anniversary 2 times and for Christmas 2 yrs he never bought me anything except a nice card (that he waits until the last minute to get).

I just hate this life, I hate trying to live my life in her shadow, I feel that he still loves her and always will, I think that he is mad at her and hates the fact that she left him the way she did (for another man) but I think that he would take her back in a moment if he had the opportunity.

I know he was madly in love with her and just because he tells me & everyone now how horrible she was and how badly she treated him, is only because she hurt him so badly. He is mad at her but still loves her in my book. I know that he loves me and he is good to me but he is not in love with me and that makes for a sad marriage. Any help, any suggestions?" -DG

It's hard enough when you know your partner isn't in love with you, but on top of that you've got to deal with his talking about his ex all the time. That's got to be really tough. I've got a few suggestions for you.

First, set some boundaries with your husband on his talking about her around you. What this means is setting limits on your listening to him talk about her.

Start by telling him that you don't want to hear about her anymore, and if you do, you're going to remove yourself from wherever you might be with him. As we set boundaries with our partners on what we'll tolerate from them, it's important that we let them know our expectations and what we're going to do if they don't respect our requests.

After you've explained this to him, the next time he starts talking about her, remind him that you don't want to hear about her and walk out of the room, hang-up the phone, or even leave the house if necessary. Do whatever it takes to set a clear boundary, or limit, on your hearing him talk about her.

Second, begin to expect more from your husband and your marriage. Nothing you've described about how you want him to show you that he loves you is unreasonable. So stop accepting being second best - that's a choice you're making. If you want him to value, appreciate, and love you, then stop tolerating not getting it. One way you can start to do this by following the instructions in #1.

Third, get some guidance and support. The situation you're in is really, really hard. Every wife I've worked with in a similar relationship has really needed and benefited from having an expert to guide them. Get marriage counseling help you to find the power you have, but just can't see right now, to change your marriage. A marriage counselor who has expertise in dealing with difficult men will be even better for your situation.

Do you have a question you'd like to Ask a Marriage Counselor? Click here to submit your question and I'll answer it in an up coming post. Be sure to subscribe at the bottom of the page so you'll get my answer.