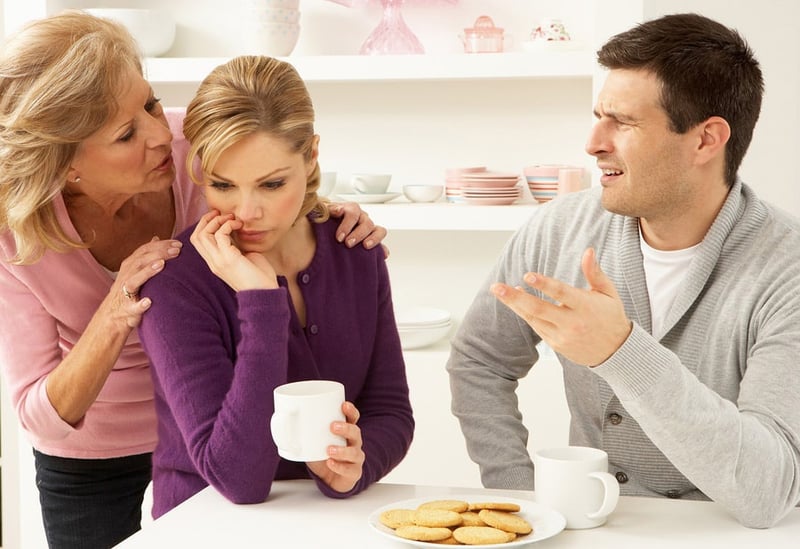 There are few things in life that can be as frustrating as someone else telling you what to do and meddling in your personal life. With most people, it would be no problem to tell them you can do things your way and to mind their own business. But what if it’s your controlling in-laws?

Do your in-laws try to manipulate situations to get their way? Manipulation can involve guilt trips, saying inappropriate things, or even their asking your partner to help them with things they really don’t need help with. It can be hard to not let the in-laws take control this way. Once in-laws realize they can successfully manipulate your relationship, they will try to do so again and again. Here’s an example from our blog:

I'm about to marry my best friend, and love of my life. We have been living together for 4 years, dating for five years. His mother has always been passive aggressive with me, recently it has gotten out of control. She always interrupts me. She will not acknowledge the fact that once he met me he moved out, got a great job and became an independent, confident man. She always wants to bring up his black sheep past. She says some pretty offensive comments. She made a comment recently that just made me cringe. "Did you know lots of grooms will get nervous and leave the bride at the altar?" I have tried to let it go, and not let her actions bother me. I'm trying to have compassion for her. But each time I see her, she will say something rude. She used to get his brother or father to ask him on a boys trip with his brother, only to find out last minute she was coming along with his brothers girlfriend. This happened a few times. For holidays she always asks if I'm coming, when I've always came to family gatherings. We are a package deal. She will always come up for a reason to see her, needing help with this or that. I love my fiance, and respect that he loves his mother. I have tried to address it with my fiance but he always says that's just how she is. She is literally the only thing we fight about." -Melly

Do your in-laws butt-in to things that should be between just the two of you? If they are advising you uninvited about how to spend your money, telling you where to live, or getting involved in disagreements, you’ve got controlling in-laws.

In-laws can control things with slightly less obvious intrusions as well, like wanting to be your new best friend so they know what’s going on all the time. It’s really important to guard your privacy as a couple. Here’s an example of what in-laws interfering can look like from our blog:

Hi I have been married almost 4 yrs and am now expecting my 2nd child… His mother is very controlling so she wants to do everything herself. She also nags me a lot about everything. Even when im goin somewhere I have to inform her and then she asks me 100 questions. In the beginning my mother in law taunted me about dowry and trated me like a maid so I resent her. im a well educated girl from a good well off family… For 2 yrs I listened to everything my inlaws said. They dont even like me meeting my parents every week. When I couldnt tolerate them anymore I started standing up for what I wanted and thats when my husband n I started having problems. Now he is good to me until I do anything against his will or undesirable to his mom… I have now started to hate him and I hate his mom…" –Ash

How To Deal With Over-Bearing In-Laws

Conflicts with in-laws have to be handled carefully, as you don’t want two conflicts on your hands, like in the examples above.

Here's what Kurt had to say about dealing with controlling in-laws:

Remember that your partner is in a tough spot – caught in the middle between you and their parents. Try to be understanding that it's hard to navigate both relationships and keep everyone happy. So focus more on the support you need from your partner rather than on how you feel about your in-laws' controlling behavior. This should help them to feel less defensive."

Give these a try:

These people will be in your lives for a long time, so it’s very important to get the issues worked out. Don’t allow your controlling in-laws to ruin your relationship. Having a strong, united front so that you two are in control of your marriage is doable, but it does require you both to focus on each other rather than them.